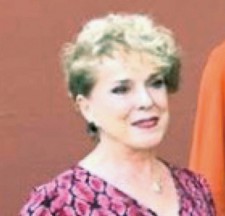 Alicia Díaz Brown is with the Citizens Movement for Water, Sonora, Mexico. A video of her speech was presented to the Schiller Institute International Conference on June 27, 2020, “Will Humanity Prosper, or Perish? The Future Demands a Four-Power Summit Now,” on Panel 2: “Why a 1.5 Billion Productive Jobs Program Can End War, Famine, Poverty, and Disease.” This is an edited transcript of that speech as presented.

Let’s turn to the best moments in the U.S.-Mexico relationship. We thank the Schiller Institute and its President, Helga Zepp-LaRouche, for kindly giving us the opportunity to participate in this international gathering, in which special importance is given to the problem of food production. In every civilizational crisis the threat of hunger, epidemics and war appears. That is why we agree with the title which headlines this meeting: Will humanity prosper, or perish?

I live in the Yaqui Valley in the south of the state of Sonora in Mexico. I belong to a family of agricultural producers, pioneers in this valley, and I am a member of the Yaqui Agricultural Credit Union and of the Citizens’ Movement for Water.

For many years, I have been involved in the discussion of problems related to the production of basic grains, but in the last decade I’ve been more intensely involved, because the public policies in Mexico have grown in their disregard of the countryside, to the point of proposing to take water from this region to divert it towards activities which they consider more profitable monetarily, even though that means reducing the land under cultivation, and with it the production of food. They don’t care about harming a region that produces 50% of the nation’s wheat, as well as a significant percentage of its corn. 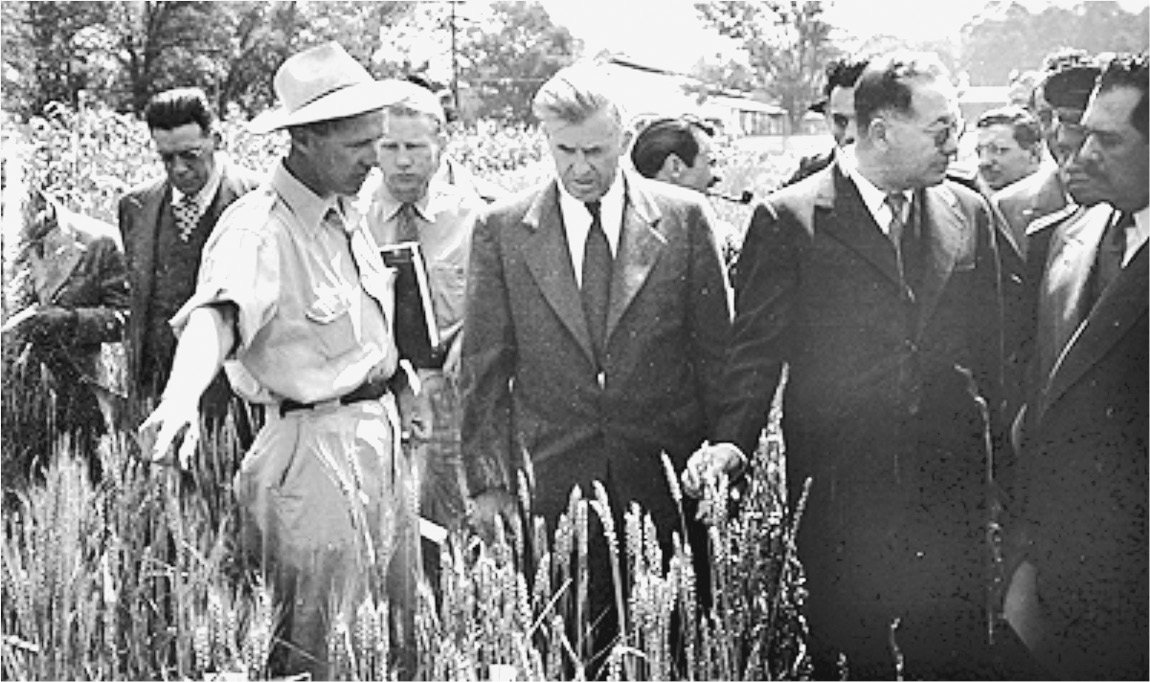 I recently saw a photograph that captures a very evocative moment of historical intimacy and common purpose that Mexico and the United States shared in the noble task of producing food to relieve hunger in the world. It’s a picture that takes us back to the decade of the 1940s, showing the then Vice President of the United States, Henry Wallace, touring a wheat crop in the Texcoco region of Mexico and receiving a technical explanation from Dr. Norman Borlaug, accompanied by Mexico’s Secretary of Agriculture, and ex-President Lázaro Cárdenas. The government of President Ávila Camacho was just underway.

That was a time in which Mexico and the United States enjoyed governments with sufficient social strength to enforce the principle of the general welfare. Those efforts culminated in the Green Revolution, whose improvements in seed genetics made it possible for there to be substantial increases in yields per acre, principally of wheat and corn. The entire world benefited from this; the hunger of hundreds of millions of human beings was relieved for a time, and it turned out to be a fundamental experiment which demolished the Malthusian and anti-population theories which accept hunger and its aftermath of death as a matter of fate.

The Yaqui Valley in Sonora and the Texcoco region in the State of Mexico were experimental centers, in which Borlaug shared with Mexican researchers and producers his own research, his discoveries, but above all his human conviction that, with the systematic use of science, you can constantly maintain growth of production and combat the blights and fungus that damage plants. They proved that hunger is not an inexorable evil, but rather the result of twisted practices in economic and marketing criteria.

We Once Knew How

So Mexico and the United States share the prize that, at one point in history, we were able to relieve hunger in the world, because this knowledge was taken to India and to the countries most affected by hunger on the African continent.

But we lost that mission, and the production of food, as with other strategic areas of our economies, was trapped by the corporatization of the economy and by monetarist criteria, in which monetary profits come first and foremost, and physical production is no longer a moral imperative, and instead becomes an optional element dominated by financial speculation. These policies took over at the beginning of the 1990s and they govern the free trade agreements among the United States, Canada and Mexico.

During the last 30 years, national grain production in Mexico has lacked a price policy that would guarantee the producer his capitalization. Parity prices were eliminated—they had been the cornerstone for the country to be able to achieve an important degree of self-sufficiency in wheat, corn, beans and rice. The state withdrew from the marketing process; the domestic market was abandoned; and national production passed into the hands of international corporations which monopolize world trade and speculate on grain prices on the Chicago Board of Trade.

The result of all this is that Mexico has become an importer of basic grains. The current government talks about food self-sufficiency, but it confuses it with self-consumption, and they disperse resources to regions of the country that only consume what they produce, but which lack the ability to produce the food that the country needs. The regions with the greatest productive capabilities in wheat and corn have been left to the mercy of the big corporations that control the international markets, and they withdrew the compensatory support that allowed them to survive.

The big winners and predators are not engaged in producing food; they speculate with existing production. They control the prices on the Chicago Board of Trade, and they have turned the market into a dictatorial instrument. They are not interested in producing. Their preferred world is one of shortages and hunger. And what is sorrier still is that our governments have given in to those interests. In that way, the U.S. loses, Mexico loses, and the world loses.

Citizens Must Act as Citizens

When governments give in, we citizens have the moral and political duty to enforce the principle of the general welfare. At the beginning of my remarks, I referred to a photograph which bears witness to a historical moment of excellent relations between Mexico and the United States. For now, we do not have in our governments people of the moral stature and courage of those who were shown in that photograph.

For that very reason, I believe that now is the time for citizens to make their governments rise to the challenge. Let these meetings serve to begin to weave an alliance of Mexican and North American producers with the ability to exercise the required political and moral pressure on our governments, and in that way establish common goals in terms of how to increase food production; how to reestablish parity prices; how to increase yields per acre; how to build great infrastructure projects of a bi-national nature to manage increased quantities of water and power, which will allow us to significantly increase land under cultivation.

These are some of the tasks we have before us; but what is most urgent is to tell the world that we have initiated this relationship, that we are going to maintain it, and that we are going to resume the historical impetus of the best moments of the Mexico-U.S. relationship, to demand the required agreements among the world’s powers that are morally obligated to lift humanity out of the uncertainty in which the shocking economic crisis has placed us, with its inherent threats of pandemics, hunger and war.