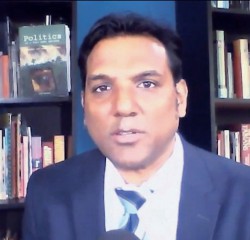 Dr. Kirk Meighoo is a political economist, broadcaster, and former Senator in Trinidad and Tobago. He gave this presentation to the Schiller Institute International Conference on June 27, 2020, “Will Humanity Prosper, or Perish? The Future Demands a Four-Power Summit Now,” on Panel 2: “Why a 1.5 billion Productive Jobs Program Can End War, Famine, Poverty, and Disease.” This is an edited transcript of that speech.

I’ve been a friend of the LaRouche movement and the Schiller Institute for a number of years now. There are so many things that we share in common, and there’s a lot of projects that I want us to collaborate on, and this certainly is one them.

Now, I’m also a member of the official opposition party. We do have an election coming up this year, and we hope to take government. The platform, the manifesto of our party—and this is from before the COVID crisis—was to create 50,000 new jobs in the economy. And in our small economy, we have 1.3 million people in our island, and the labor force is about 650,000, so 50,000 was a big number. However, with the COVID-19 lockdowns and what it’s done to our economies and the whole global economy, we need to increase that number at least to 150,000, and by combining it with this program from the LaRouche movement for 1.5 billion productive jobs around the world, there is an incredible synergy that we must take advantage of.

Now, one of the things that I’m always concerned about, is that we small states in the Caribbean—we are actually one of the bigger islands, with over a million population; while Jamaica has a little over 2 million, many of the other islands are much, much smaller—there’s a tendency for us to be overlooked, for us to be forgotten in such schemes, and that is part of our lack of development here. But it is not just a matter of a lack of development, it’s also the type of development we’ve been undergoing.

I’m also part of a tradition of intellectuals here, started in the 1960s, soon after our formal independence, called the “New World Group.” And it’s incredible, the overlap with the LaRouche movement in terms of our analysis and our goals and our solutions. I have always found that to be an amazing thing, and it’s just another illustration on how the truth is one, and we can all arrive at the same truth from our very different points in time, space, and circumstance, and this is certainly one of those instances.

For the Caribbean, the point I’m making about the inclusion of the Caribbean in this global program that the Schiller Institute and the LaRouche movement is proposing, is not just a matter of charity. Because what the LaRouche movement is proposing is an end to the trans-Atlantic system, what might traditionally be called “imperialism,” an end to the imperial system, to the post-Columbus system, if you want to put it in those terms, and that is precisely what we have been calling for, for decades ourselves.

Because, you see, the Caribbean has a special place in this 500-year modern world economic system that we need to understand, because our participation in it was central. The Caribbean was where the modern world began: It’s where Columbus came in his voyage, it’s where the first global production of sugar, rum, alcohol, etc.—which enriched New York, Boston, the East Coast of the United States—fed into the industrial revolution. The organizing of these huge plantations in the Caribbean was a forerunner to industrial capitalism in Europe, and our great intellectuals, such as Dr. Eric Williams, our first Prime Minister, spoke about that in his seminal book from 1944, Capitalism and Slavery.

The 500 Years of Modern History

So, we’ve had a long experience, analyzing this, our own experiences. Because we represent the dark side of this modernity. Of course, modernity has brought a lot of good to the world. But in the Caribbean, this type of economy now has become—let’s say since the 1980s and ’90s—the neo-liberal system, but it really starts from the system of slavery in the Caribbean. Because, think about it: These economies were founded on slave labor, which is imported farm labor at cheap or free cost. It decimated local economies. We made nothing for ourselves here.

Everything was around sugar production, mainly. Sometimes some other people had other crops, but whatever the early English colonists had here for their own self-development—tobacco, food crops, etc., local settlements, colonies in the true sense of the word, where you’re making your own settlement elsewhere—we were part of this imperial system that the Caribbean was central to. And this global sugar production, the triangular trade where we were central—this is actually what’s going on in the rest of the world. Because when they established it here, they had to cut out the independent farmers; they had to buy out all the independent landowners, so that the big sugar interests could own all the land, control all the production, in a global system of raw-materials export, where the value added would be done elsewhere, and you break up the whole chain of production.

What did that mean? That meant no manufacturing here. What did that mean? That meant that we were connected to the metropole, rather than to ourselves. So, for example, it’s easier for us in Trinidad to go to New York, and it’s cheaper for us to fly there, than it is to fly to a neighboring island, like Curaçao, or even Antigua, or St. Kitts. Because our communications and infrastructure were always to the metropole. We did not have an internal economy with manufacturing: We did not make our own clothes, we did not make our own food, we did not make our own basic commodities and services for survival. They were all imported. We were a pure import-export economy and we remain so, whether it be in tourism or offshore banking, or oil and gas, like we have in Trinidad and Tobago.

So we’ve been struggling with this issue and problem for a very long time. We have some great insight into it, which we can offer the world. And what we see is that this same process is happening around the world, to other countries. So it’s as if they took this early model, pioneered in the Caribbean—which produced tremendous inequality, tremendous misery, tremendous underdevelopment—this is what the trans-Atlantic system is projecting to every country in the world.

Now, solving the problems here will help us solve the problems for the rest of the world. This is where it started. We pose some challenges because of our size, but there are also some opportunities. Our small societies in the Caribbean are like the small city-states of ancient Greece, where Plato and Aristotle and the great philosophers flourished. It’s like the Florentine city-state: These places were 40,000 people at their maximum population.

We live in human-scale societies, and these massive, mega-cities which are part of the whole trans-Atlantic system, mainly financial centers processing these huge, global, faceless corporations, those are inhuman environments. And I think it is not coincidental, that much of the violence that we’re seeing in the world is happening in these big cities, where there’s so much anomie, so much alienation, and a lack of humanity, a lack of the face-to-face societies that we have here in the Caribbean, that have produced such amazing creativity, such amazing thinkers, like V.S. Naipaul, like Sir Arthur Lewis, like Derek Walcott, like C.L.R. James, from such tiny, tiny, small islands.

So, this is a plea, a reminder, to think of how we can take our outlying territories, which seem like outliers of the world system, but were essential for the development of the modern world system, and I daresay, we can play an essential part in the remaking of that world system to a more humane, global system.

I want to thank you for the opportunity to make our presentation. I look forward to questions and to interacting with you and also partnering in the future.