Getting Back the Great Ideas That Were Stolen From Us

Following the initial panel presentations, remarks were heard from organizers representing the Schiller Institute Youth Movement in Ibero-America: Carolina Domínguez-Cisneros, who is leading the Youth Movement of the Schiller Institute in Mexico; Sebastián Debernardi, from Peru; Andrés Carpintero, in Bogotá, Colombia; and Daniel Dufreine Arévalo, from Mexico. This is the edited transcript of the simultaneous English interpretation of their remarks delivered in Spanish. 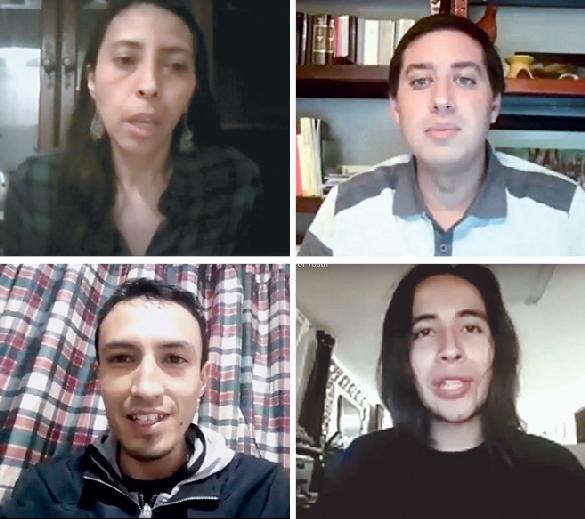 Carolina Domínguez-Cisneros: This international conference is a result of the efforts of the Schiller Institute, which I’ve been a member of, for a number of years. I would like to share with you our enthusiasm and hope in creating an international youth movement.

Throughout his life, Lyndon LaRouche, and his movement which we are part of, defended the idea of creating a youth movement that studies the most profound ideas that humanity has produced. These profound ideas represent the creation of new institutions. LaRouche always said that, if you want to educate a president and transform a society, you should create a youth movement. And that is what we have done.

The youth movement which we are now creating is based on the idea of giving youth what has been stolen from them in their universities, their schools, and in general. They have stolen from them the idea that they can know the universe, they can understand the universe, and master the principles that run the universe in which man lives. In addition to understanding those universal principles, they can take them, master them, and apply them for the welfare of all society.

As you have seen throughout this conference, it is essential that youth and the new generations master these concepts.

So our work in Mexico, Colombia, Peru, Chile, Argentina, Venezuela and in general in Spanish-speaking countries, the task we have taken up is to gather together these youth who are interested in transforming history, in being participants in an international process with other youth who are not willing to be told by the media that yes, this is a sad situation, that lots of people are dying daily—but rather that they have to change it. They cannot just wait to someday be part of those statistics, but they have to act.

And that is what the LaRouche movement exists to do, to be that guide. We have weekly meetings studying Kepler, the astronomer whom LaRouche tasked us to understand. Kepler showed how human beings are able to understand those principles, and he left us documents that allow us to understand his method and his thinking. We also study Friedrich Schiller—right now we are reading the Letters on the Aesthetical Education of Man, which has totally stunned the youth about how they have been denied all these ideas in the universities. The younger people in these meetings are the ones who are most struck, thinking that their education has only been to learn things, pass an exam, and then forget them. Now they recognize, by participating in our movement, that the knowledge and method they are learning is useful to transform society.

So the message I want to give you is to join and participate in this movement. I don’t expect you to agree with all of the ideas that we have discussed on these panels, but I do believe that we have all felt at some point that things are not right, and that it is necessary to do something, to assume responsibility as young adults.

The following messages that we are going to hear are from youth whom we have asked to comment on what they think of the work we’ve done—youth from Peru, Colombia and Mexico, who have taken up the opportunity to know the ideas that were stolen from them in their formal education.

So I invite you to participate in this. We have meetings every week, and this movement is growing. All of the work that Lyndon LaRouche developed has allowed us to master ideas that will help us change history, and not be reconciled to a totally uncertain future. That is my message to you; we’re here so that all youth can participate in this process. Thank you, very much.

Sebastián Debernardi: I want to tell you about a Dialogue Meeting that we held on June 17, with the participation of Schiller Institute youth from Latin America, on the subject of the proposal to create 1.5 billion new, productive jobs in the world. That program is in response to the economic and health crises globally, and to the urgent need of the population as a whole to have greater development for their lives, and those of their families.

Various great projects proposed for our countries by the Schiller Institute can have a major impact both on the creation of jobs that improve the quality of life for people, such as access to a better education and culture to be able to carry them out, as well as benefits they would bring in the short term.

The Dialogue Meeting was characterized by a shared optimism, as a result of the joint search for answers to the problems of the age, which are overwhelming our countries. And so we met virtually this time, hoping to be able to actually meet soon, as a result of the completed great projects.

Andrés Carpintero: I’d like to invite you to get to know the proposals of the movement that Helga and Lyndon LaRouche have created, to reverse the economic and social entropy that has brought us the chaos we are in today. We need to learn and acquire the tools to create a clean and sustainable future, inspired by reason, morality and art. We youth will build the world of the next 50 years. Join and participate in this marvelous movement.

Daniel Dufreine Arévalo: I’m very happy to greet you from Mexico. I have a very important message for you, especially the youth. We are living in a world that is changing ever more quickly, but the only thing that hasn’t changed is oppression by the powerful, who are toying with the world’s people. We are living in mankind’s most important age, a mankind whose purpose is to grow and improve those aspects of life which make us human: love, passion, joy and methodology. The powerful have taken all of this from us, and they will continue to do so, unless we change this reality.

Fortunately, there is a plan, a plan inspired in the profound thinking of Lyndon LaRouche, which essentially is an educational for fighting against the problems caused by the sick ambitions of the Wall Street and City of London circles. That plan requires the greatest possible number of youth, with their dreams and hopes, in order to make a better world in which to live, and not merely survive.

The Glass-Steagall Act will be implemented; the banks will be quarantined because they are bankrupt; and the toxic derivatives bubble will be frozen. We will demand that the leaders of Russia, China, the United States and India meet to decide on the next stage of industrial growth, which will allow us to grow more, while using less. Connecting the world with hundreds of thousands of kilometers of high-speed rail lines; creating more than 1.5 billion jobs in the whole world.

The time for changing the world has arrived, and we need you now. Let us fight now, to make this reality possible. Let us all fight to free the world, to bring down national barriers, to eliminate ambition and hate. Let us fight for the world of reason, for a world where science, where progress lead us all to happiness. Brothers, in the name of freedom, we must all unite.