Daniel BurkeIf You Sat Where They Sit, What Would You Do? 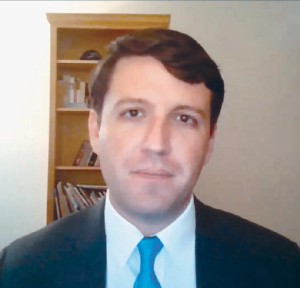 Daniel Burke is an independent candidate for the U.S. Senate from New Jersey. This is an edited transcript of his presentation to the Schiller Institute International Conference, on June 27, 2020, “Will Humanity Prosper, or Perish? The Future Demands a Four-Power Summit Now,” on Panel 3: “The Job of Youth.”

The Schiller Institute has convened this conference with the urgent goal of bringing about a summit of the leaders of the so-called Four Powers: Russia, China, India, and the United States. I address my presentation to the youth of the world, to encourage them to investigate for themselves, what should be the character of such a summit. For, without a personal notion of what should be accomplished, how can you genuinely demand this meeting to occur?

So, my question is, “If you sat where they sit, what would you do?” You may also stand; sitting is not mandatory.

It may be useful to begin by asking, just who is it that we are sitting in for? Not in the sense of, who are Trump, Putin, Xi, and Modi personally—but, who is a national leader and what are their obligations?

Some, like John Bolton, perhaps, would say that the authority of the U.S. Presidency lies in its vast power—its military power. Its power to kill. These are the heirs of Thrasymachus, outright Satanists, who, in fact, obliterate the notion of “authority” by crowning “force” supreme—force without regard for its author. This concept of authority is exactly the one preventing a summit from taking place.

It’s like Mike Pompeo’s doctrine of deterrence—kill them first, that way they can’t do anything wrong!

To many Americans, the source of a President’s authority lies in the notion of “democracy.” Since we elected our President, he gets his authority from the people. He should represent their will. These are the people who put, “Not my President!” on their bumper stickers. But, it raises a question: What if your citizens have become a bunch of raving degenerates, on account of the misleadership of the past, or their own moral failings? What if their will is to take drugs and play video games? That would make for a terrible summit!

If we change our approach, and say that this authority comes from the “consent of the governed” rather than “the will of the people,” an obvious question follows: “By what authority do individuals confer their consent?”

In our nation’s Declaration of Independence, we answered this question by appealing to the unalienable rights conferred on all human beings by their Creator—to life, liberty, and the pursuit of happiness.

Ultimately, therefore, the President’s authority, and, indeed, the authority of the leader of any sovereign nation, does not derive from the people, or even from the Constitution or the Declaration of Independence (no words jumped off the page to give him the keys to the White House), but rather from the natural rights of the human individual in the living image of God. Should life, liberty, and the pursuit of happiness be promoted, the obligations of that authority are fulfilled. The same concept is known in China as the “Mandate of Heaven.”

The Pursuit of Happiness

This creates another problem—you’d better figure out what this thing called happiness is! So, if you’re depressed, you’re going to have to give that up.

I submit to you—that the greatest happiness is that which corresponds most closely with our unique human characteristics. We are not animals! We are creative creatures. We think, we discover, we devote ourselves to the future. Not to the present—to the future!

Here, I can disabuse you of the idea that you are important because you are youth! It’s not so. It’s because you are humans! I will quote from Mr. LaRouche: “Natural Law is the hypothesis which corresponds to the necessary and sufficient reason for mankind’s successfully continued existence.” That is—human progress in the universe towards a greater and greater mastery over its principles, is an essential function of that universe. We’re acting on behalf of the universe, when we do that.

As the German-American space pioneer Krafft Ehricke put it, “By expanding through the Universe, man fulfills his destiny as an element of life, endowed with the power of reason and the wisdom of the moral law within himself.”

So, I think it is not at all an exaggeration, to say that the authority of these Four Leaders, to create this New Paradigm, depends upon the future colonization of the Solar System, and, implicitly, the Galaxy. That is the most human thing that we can do.

Their actions today, these leaders, are necessary to the task before us, which will have been vitally important to creating that future—today, we have to overturn the unjust rule over world relations by Thrasymachus! He has palaces in the City of London, in Lower Manhattan, and we should repossess them, and his weapons of mass destruction—financial derivatives—should be buried in a cave where they can’t harm anyone.

And if we act in that way, we can unleash a Promethean age—we can create miracles such as the founding of a freedom from material want for every human child. A future where even the Moon and the Earth, who have been lovers forever, according to Percy Shelley, will finally marry, and the ceremony held at the founding of the first international Moon village. And in case you think I am too optimistic, consider the words of Lysander Spooner, from his 1860 treatise, “The Unconstitutionality of Slavery”:

Natural law may be overborne by arbitrary institutions; but she will never aid or perpetuate them. For her to do so, would be to resist, and even deny her own authority. It would present the case of a principle warring against and overcoming itself. Instead of this, she asserts her own authority on the first opportunity. The moment the arbitrary law expires by its own limitation, natural law resumes her reign.

Here I find, then, the job of the youth. Regarding yourself not as youth per se, but as practitioners of the natural rights of man—discover for yourself the limitations of the arbitrary law of oligarchy, which has prevented humanity as a whole from acting in accord with natural law.

What are the limits to a tyrant’s power? Where is the weak flank of the enemy?

I think it lies in the flimsiness of the postmodern paradigm, so-called. “The prevailing narrative” tells us that we want to be free from judgment, free from responsibility, free from rules or limits on our behavior. Free Wi-Fi. Or—increasingly popular—we’re encouraged to run society the way that the Big Tech firms run social media. Block anyone whose views differ from you—they are not human; you are justified in ruining their lives by any means necessary.

And stacked on top of those narratives is a meta-narrative: namely, that the universe as such is fundamentally unknowable, and that “narratives” are how we impose meaning on our lives—while we all acknowledge, with a knowing glance, that such a task is, in fact, meaningless.

You can know whether you like Death Metal, or Lo-Fi Hip Hop, or K-Pop, but you cannot know the meaning of your life in history—you can know if you identify as left-libertarian, or right-authoritarian, but you cannot know how to end poverty. Poverty, human suffering, these are merely part of the pastiche—the millimeter-deep collage of experiences that our lives comprise.

That fraudulent and quite Satanic view of the universe is a weak flank. Across the world, the real physical economic conditions have asserted themselves. The passions of the people are erupting, and being manipulated to drive us further toward the mass killing of the impoverished populations of the world. But, it’s my faith that a small number of people committed to developing a higher, more beautiful concept of the nature of man, can sound a certain note, and change the course of history. And it’s my view that this is not a hopeful wish, but it is hope itself, upon which we have always depended.

So, ultimately, will you find within yourself the moral leadership, to cause yourself and others to discover the principles of natural law?