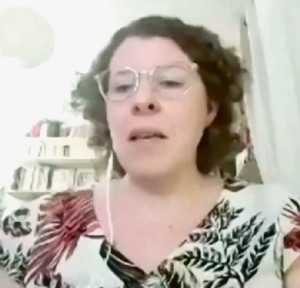 Chérine Sultan is an organizer with the Schiller Institute in Paris. This is the edited transcript of the simultaneous translation from French of her presentation to the Schiller Institute International Conference, on June 27, 2020, “Will Humanity Prosper, or Perish? The Future Demands a Four-Power Summit Now,” on Panel 3: “The Job of Youth.”

I would like to thank Sarah [Fahim] for developing this question of digital, as a chance to develop youth. But I would like to raise the negative point of the digital culture today and see what we can do. We could call that, “the youth and the digital and the future, how to employ digital?” Because often, you get children whose parents are telling them, you have to work in order to earn money, and you have to get good results in school. And when you have good results in school, the parents say, “Well, I’m going to give him one hour of television, one hour of internet, because he’s deserves it.” So, it’s a kind pathway to push children to education.

The problem is that the good results in school are not so good, because the level of education has been going down.

It’s become a competition, and the negative point in that is, some of them are becoming Manhattan sellers, even against their will, but they’re just selling things, selling themselves, selling products—for instance, makeup, clothes, drinking. Imagine that, for the very famous influencers, we can have $20,000 for some minutes of video, and some of them are less than 18 years old, so the parents are dealing with that; and some of them are very happy to have this money, because of the unemployment. So that is a big challenge.

Because I’m just asking the question, who is gaining, who is earning the money, really? Actually, it’s not the people who are selling the product, it is the companies. Because the companies are just using those young people to sell things. So we can see that the videos are touching more and more people than advertising in the metro stations, because it’s spreading very widely on the internet. And so, if you know Edward Bernays on propaganda, he developed the concept of advertising, this idea of making people commercialized, to sell people was already developed.

One of the favorite hobbies of youth is TikTok, today. TikTok is one of the main occupations of children. I don’t know how many millions of young people have subscribed to this network. You have a lot of young people dancing, and you have to manage to do a perfect dance movement on the video, enter it on the app and you can share the video—and you can do it again and again, before you share it. And so you’re repeating all the movements. Now you have children in classrooms or at home, doing the movements unconsciously, so it’s kind of a robotization of the body’s movement. So their behavior is modelled by this kind of dance. People are more and more sharing their pictures without really going to other places; they’re staying at home, sharing pictures, and not traveling or going anywhere to share.

Finally, people are becoming enslaved by social networks. You could say that of those young people who want to be influencers, you could say that. (I’m trying to get the idea.) So you have those young people who have access to a higher level, and they want to be not influencers as such in the social networks, but they want to build startups. And the problem is that even in this world of the startup, the small companies growing up, there is a trap, because you need a lot of finance at the beginning, and the finances come from the big companies.

If you don’t have money to invest at the beginning, you have to submit to the big companies like Google and Microsoft, and you will have to work for them. But because in France you have something, just call it Station F, which is a startup incubator—like you have a lot of young people doing things, and to go into that you have to pay rent, you have to access employment, often, you have to be dependent on a big company like the GAFAM, which is Google, Apple, Facebook, Amazon and Microsoft. And if you are clever enough to develop something, the big company will help you, but you will be under the circumstance of being employed by the company.

So your competence is used by those big companies. So maybe you are clever, you’ve done good studies, but we have to change the social environment and the economic environment, to ensure that the intelligence of people is used for the common good, not for those who have power. The question is, who will be the instructed politicians, because now you have a lot of politicians who are discouraging, they are showing a lot of mediocrity.