Persevering in Pursuit of Science: Mars 2020! 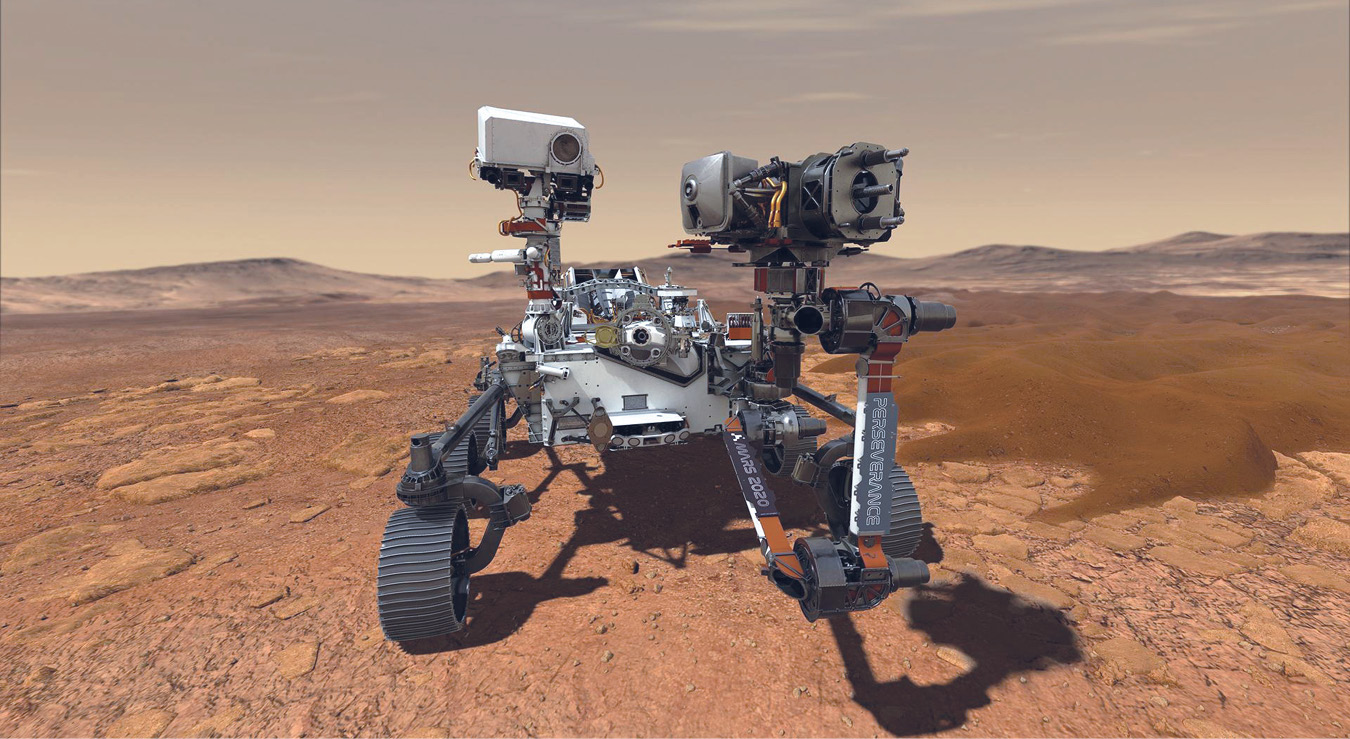 NASA/JPL-Caltech
A depiction of NASA’s Perseverance rover operating on the surface of Mars. Launched on July 30, 2020, Perseverance will land on the Red Planet on February 18, 2021.

We need to give mankind a sense of purpose, developmental purpose, not only throughout the planet, but through the influence of Earth on the adjoining regions of the Solar system and beyond.

Aug.1—Even in the midst of our greatest challenges and obstacles, humanity shall persevere. In a time of great fear and uncertainty, in the midst of political upheaval and unrest, a great moment of inspiration and optimism can arise that transforms little people into great leaders and inspires generations.

In the month of July 2020, three nations have launched inspiring missions to our closest neighbor planet, Mars, to seek answers to some of the most challenging questions perplexing humanity. Was there once life on Mars? If so, what does that mean for life elsewhere in the universe? How was our Solar system formed? What can Mars tell us about our own planet? Did life on Mars and Earth coexist 3 billion years ago?

The three daring missions that have ventured out to the Red Planet include the United Arab Emirates’ Al Amal (“Hope”) mission, which launched aboard a Japanese rocket; China’s Tianwen-1 (“Ask Heaven Questions”) mission; and the United States of America’s Mars 2020 Perseverance mission.

All three of these missions are now heading toward Mars and will deeply transform our understanding of the planet when they arrive in the Spring of 2021, after traveling through space for the next 6 to 7 months. The United Arab Emirates’ Al Amal mission is designed to map out the entire Martian atmosphere for the first time ever. China has launched a three-pronged mission consisting, for the first time, of an orbiter, a lander, and a rover; it will land in Mars’ Utopia Planitia. The scientific objectives of China’s Tianwen-1 mission include mapping the morphology and geological structure of Mars, investigating the surface soil characteristics and water-ice distribution, and measuring the electromagnetic, gravitational, and internal structure.

Perseverance was the name selected from among 28,000 essay entries. The winner of the essay contest was a young seventh-grader named Alexander Mather. He wrote: “Curiosity, Insight, Spirit, Opportunity, if you think about it all of these names of past Mars rovers are qualities we possess as humans. We are always curious, and seek opportunity. We have the spirit and insight to explore the Moon, Mars and beyond. But, if rovers are to be the qualities of us as a race, we miss the most important thing, Perseverance.”

Perseverance was certainly the driving force in conquering the challenges of meeting the goal of exploring Mars. We have overcome many obstacles, and have already seen astonishingly great achievements, but we have many miles to go.

As reported on the website of the Mars 2020 team at the Jet Propulsion Lab, “Because of the Coronavirus pandemic the months leading up to the launch in particular have required creative problem solving, team work, and determination.” When we put our creative minds to it, there are no problems we cannot solve and no obstacles we can’t overcome. “With the launch of Perseverance, we begin another historic mission of exploration,” said NASA Administrator Jim Bridenstine. “This amazing explorer’s journey has already required the very best from all of us to get it to launch through these challenging times. Now we can look forward to its incredible science and to bringing samples of Mars home even as we advance human missions to the Red Planet. As a mission, as an agency, and as a country, we will persevere.”

Perseverance, the Mars 2020 rover, was launched successfully on July 30 aboard the United Launch Alliance’s mighty Atlas V rocket from Pad 41 at Cape Canaveral in Florida, carrying with it Ingenuity, the 4-pound helicopter that will demonstrate powered flight on Mars for the first time. You will learn more about this exciting mission in the article by Marsha Freeman in this issue.

The Perseverance rover is a robotic mission weighing nearly 2,260 pounds—about the size of a small SUV. The rover’s astrobiology mission will land at Jezero Crater when it reaches Mars in February 2021. In search for signs of past microbial life, it will collect samples for a future return mission to Earth, and will pave the way for human exploration of Mars.

Perseverance stands on the shoulders of its predecessor Curiosity, the Mars Science Laboratory launched aboard an Atlas V rocket in 2011 that landed in Gale Crater. Curiosity has made some spectacular findings on the red planet, most notably that it is a “gray planet,” meaning it now has rocks made from clays created by persistent liquid water in the form of rivers, lakes and oceans. Curiosity also found evidence of the organic chemistry needed to support living microbes, such as sulphur, nitrogen, oxygen, phosphorus, and carbon, as well as signs of active methane in the Martian atmosphere.

With its arrival at Mars, scheduled for February of 2021, Perseverance will continue to build upon the findings of Curiosity and other Mars missions in a remarkable way. Equipped with seven instruments, Perseverance will seek to answer one of the key questions of astrobiology: Are there biosignatures that life once existed on Mars? Perseverance is equipped with amazing cameras and other instruments that will allow for precision landings and hazard avoidance capability. One of the most challenging parts of the mission is the autonomous entry, descent and landing of the rover onto the Martian surface. Instruments onboard the rover will allow it to touch down on its target landing spot, while avoiding hazardous areas.

The landing spot chosen for Perseverance is a 28-mile-wide crater named Jezero. Sometime between 3 billion and 4 billion years ago at Jezero, a river flowed into a body of water the size of Lake Tahoe. Jezero Crater is located in the largest basin on Mars. The mission will collect important data about Martian geology and climate. For the first time, the United States will attempt a very daring and complex, multifaceted, Mars sample return mission, which will be a joint mission between NASA and the European Space Agency (ESA) to get the samples to an orbiter for return to Earth.

The Mars 2020 Perseverance rover mission is part of a larger program that includes missions to the Moon as a way to prepare for human exploration of the Red Planet. One of the most extraordinary instruments on the Mars 2020 mission is called MOXI, the Mars oxygen in situ resource and utilization experiment. As with most of the instruments, MOXI will help answer the questions of astrobiology and prepare the way for future human missions. MOXI was designed by a company called AirSquared. The instrument will demonstrate the possibility of turning carbon dioxide on Mars into oxygen, to be used for life support and fuel.

The world now has three missions navigating through the Solar system on their way to Mars to make fundamental discoveries about the Universe and prepare the way for humanity to fulfill its extraterrestrial imperative in the Solar system.

In 2024, overcoming all obstacles, America will land the first woman and the next man on the Moon with the Artemis Program. In the very near future, we will witness the vision of the great space pioneers fully realized with the development of permanent settlements on the Moon and Mars, as we fully unleash the concept of an open world system, as Krafft Ehricke and Lyndon LaRouche fully envisioned, on behalf of the common aims of mankind, where there are no limitations to growth and we truly give humanity a sense of developmental purpose.