Ingenuity: The FirstFlying Machine on Mars 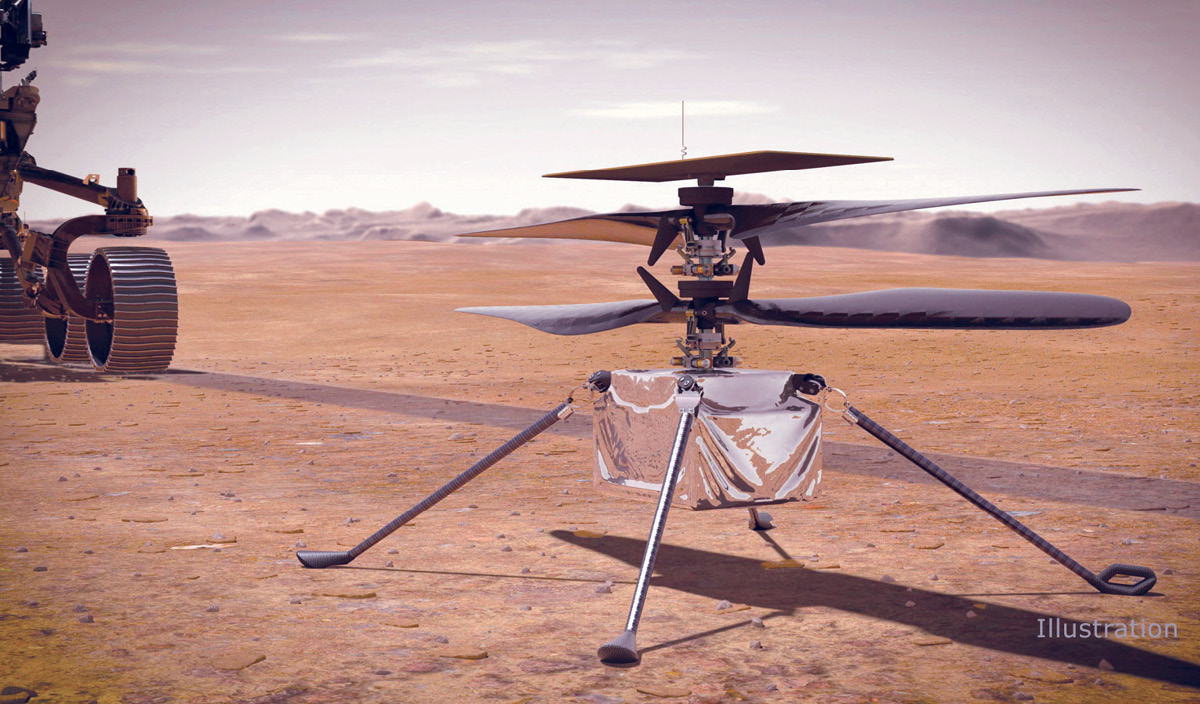 NASA/JPL-Caltech
In this artist’s sketch, NASA’s Mars helicopter Ingenuity is shown on the Red Planet’s surface, deployed from the Perseverance rover, partially visible on the left.

Aug. 2—NASA’s Perseverance rover is on its way to Mars. Attached to the belly of the rover is a tiny, four pound, gangly-looking helicopter named Ingenuity.

The span of the rotor system is about four feet, out of proportion to the size of the body of the machine, which is what accounts for its odd appearance. Mars’ atmosphere is only one hundredth the density of the Earth’s, so the rotor blades have to be bigger to give the helicopter enough lift to fly. The blades also have to rotate incredibly fast for the same reason, spinning at about 2,400 revolutions per minute.

An extremely thin atmosphere is not the only challenge for a powered vehicle on the red planet Mars; it can virtually disappear from sight during global dust storms which are more prevalent in the Spring.

Since Martian conditions cannot be replicated on Earth with a high degree of accuracy, scientists have depended upon the massive amount of data that has been collected by orbiting satellites and rovers about Mars’ weather and climate, so as to enable the miniature helicopter to try out new technology, which will increase its chances of success. Due to the communication time-lag between the Earth and Mars, Ingenuity is designed to operate autonomously.

Over the years, there have been numerous proposals to test a powered flight vehicle on Mars. (The most interesting proposal was to have an airplane land on Mars on the 100th anniversary of the demonstration of powered flight on Earth.) Unlike unpowered aerial machines such as balloons or gliders, which can only drift in the direction that the wind sends them, a powered vehicle could be directed to travel in a specific direction, with a specific destination. This would add qualitatively new capabilities to unmanned missions to Mars.

Flying vehicles, equipped with cameras as well as suites of scientific instruments, could explore places where rovers and people could not go and which are not seen clearly from orbit—such as the inside of polar craters in which there is evidence of caches of water ice. Mars has some of the most dramatic geological features in the Solar System, notably the largest volcano and a canyon as long as the distance from New York to California. The photographs from orbit show the largest features, while the rovers have revealed Mars in exquisite detail. Ingenuity, and the follow-on flying machines on Mars, will provide a literal “bird’s eye view” for the region between satellite orbit and ground, up to a few hundred feet above the surface of Mars.

This mission of Ingenuity is just the first step. It is purely a technology demonstration mission and carries no scientific instruments. Mission managers stress that Ingenuity has nothing to do with Perseverance’s science mission.

Ingenuity will not hit the ground running when Perseverance lands on Mars. It has to demonstrate its ability to carry out a list of activities. Then it will attempt its first flight. If it succeeds, the Ingenuity team will attempt up to four more test flights.

“We’ll be learning all along,” says Ingenuity’s project manager, MiMi Aung. “It will be the ultimate reward for our team to add another dimension to the way we explore other worlds in the future.”