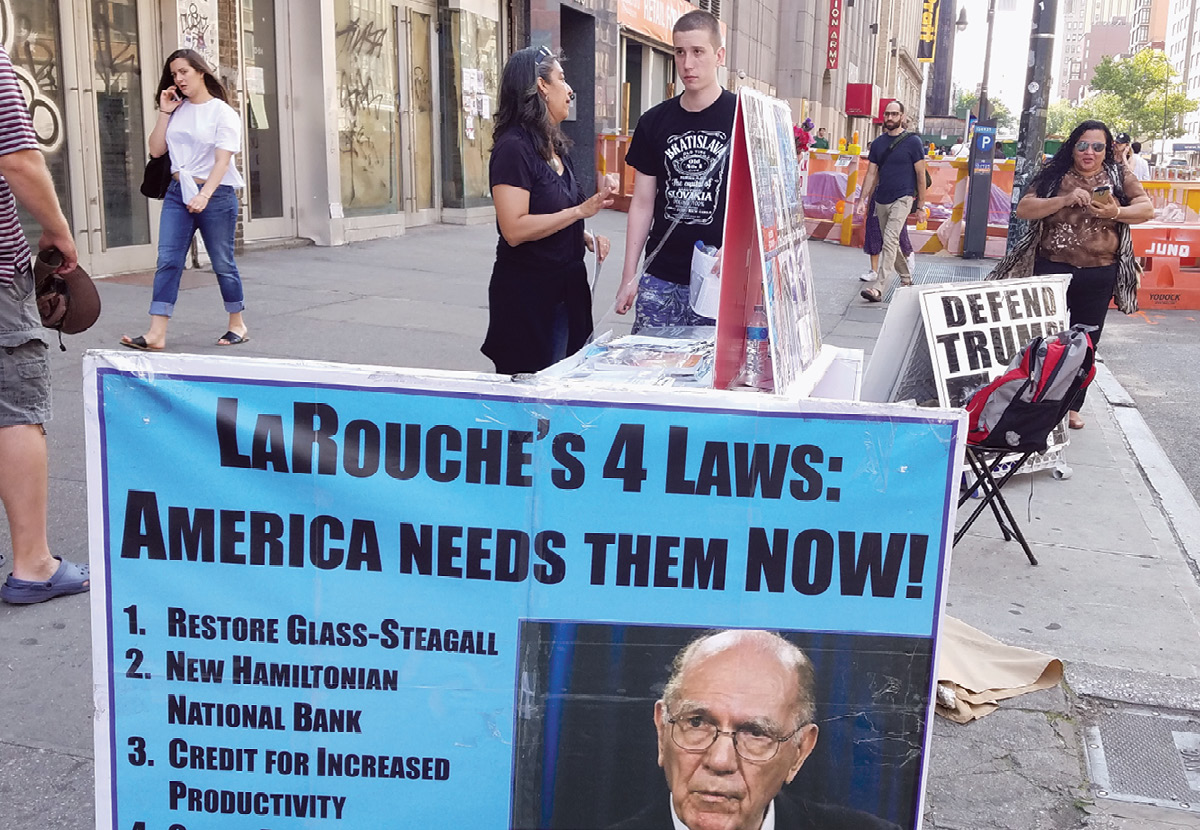 This statement, edited for publication in EIR, was released by LaRouche PAC on August 4.

In this momentous year of 2020, Americans must finally fully win the American Revolution, casting off the enemy that we have been fighting for more than 200 years.

We will organize to bring citizens to fight with us on these terms of battle:

1. End the coup against the President and prosecute its perpetrators.

2. Implement Lyndon LaRouche’s Four Laws for Economic Recovery of the United States, to unleash the productive power of our economy, freeing the nation from the grip of the global financiers.

3. Work with Russia, China, India, and other sovereign nations to establish a New Bretton Woods monetary system, freeing the world from the globalist system itself.

This battle has been joined. It is going on now. It is not a time for anyone who cares about this Republic or its future to sit on the sidelines.

Our nation, and indeed, all of civilization, is under attack. Our founder, Lyndon LaRouche, demanded that we name the name of our enemy, and not be diverted by satraps, agents, and false flags. The enemy is the British Empire, against which we fought a revolution. Today it is represented by the financiers of Wall Street and the City of London and other criminal elites, but it is the historical heir to earlier empires, operating through the same mechanisms, central banking, enforced usury, slavery (physical and mental), raw materials looting, and endless, manipulated wars.

Today, those elites would risk plunging the world into war, rather than allow the emergence of a New Bretton Woods system.

They recognize that COVID-19 has revealed the bankruptcy of their system, as it has killed the poor, the dispossessed, and the elderly even in the world’s most advanced economies because of financialized healthcare systems and poverty. Elsewhere, entire swaths of this Earth have no real healthcare or sanitation systems whatsoever, because of their deliberate Malthusian policies.

Even prior to COVID-19, their speculative bubble, built on the ruins of 2008-2009, teetered on the edge of collapse. Now, the world’s economies have been brought to a screeching halt. They have no intention of launching the necessary national mission to build our way out of this. Instead they are focused on whipping up the dangerous myth that China and Russia are our enemies, that our suffering is due to them. They hope to keep “the little men and women” pacified or impotently enraged with dope, identity politics, video games and entertainment, and, when necessary, the corrupting influence of lots of money, while they “cull the herd” through disease, famine, and war, in order to preserve their system.

The British elite have publicly declared their political intentions. In an official 2018 report, the House of Lords warned that their empire would not survive a second Trump Administration. Their plan is to elect Obama 2.0, a Joe Biden Administration, which will put the United States under a genocidal Green New Deal, drown it in chaos, and pit it against those nations that refuse to submit to a global dictatorship of central bankers and technocrats.

In 2016, Lyndon LaRouche located the Trump victory as part of an international revolt against those imperial policies. Trump’s presidency has been attacked from every quarter, preventing him from acting fully on that mandate. That mandate must be fulfilled, and Donald Trump must be reelected, or the United States will again become an appendage of the British Empire. But we need action now, long before November, to redefine the terms of battle, overturning the enemy’s plans for global conflict, civil strife, and genocide.

Defeating them will involve Americans making the delightful discovery of the fundamental difference between the American System of Alexander Hamilton, Abraham Lincoln, and Franklin Roosevelt, and that of the British System, built on the myths of free trade and worship of an unfettered and heathen “market” which has, since 1971, taken over and looted the United States and the world.

In the 1850s, as the United States was being driven toward a civil war by the British Empire, as it is today, Henry C. Carey, who would later become Abraham Lincoln’s economic adviser, wrote of that difference:

Two systems are before the world.... One looks to pauperism, ignorance, depopulation, and barbarism; the other in increasing wealth, comfort, intelligence, combination of action, and civilization. One looks towards universal war; the other towards universal peace. One is the English system; the other we may be proud to call the American system, for it is the only one ever devised the tendency of which was that of elevating while equalizing the condition of man throughout the world.

During his 2016 campaign and in the early months of his Presidency, Donald Trump called for a return to the American System of political economy, to rebuild the economy and “end the carnage” of the Bush Administrations and that of Barack Obama.

Since Donald Trump’s election, we have been subjected to an ongoing coup against his presidency, which is leading, dangerously, to a new Civil War. It has been directed by the British and the Tory advocates of their system within our government, the news media, and both political parties. It has been financed by Wall Street and Silicon Valley with ample help from foreign oligarchs. But at each stage of this process, as this President has courageously stood his ground, more of this apparatus has been exposed as never before. The leaders of this apparatus must be prosecuted, and the surveillance state they erected, beginning right after September 11, 2001 must be dismantled. This will only happen if the citizens of this country demand it and fight for it with the highest intellectual and educated passions.

Lyndon LaRouche identified the essential principles of the preamble of our Constitution, the mission statement for our nation, as follows: (1) The sovereignty of the nation-state republic; (2) That no government rules legitimately under natural law, unless it is committed to efficiently promoting the general welfare of all of the people; and (3) The commitment to act in ways that effectively plan to ensure progress in the general welfare of posterity, rather than letting the future be consumed by the appetites of the present moment.

LaRouche makes clear the economic implications of the Preamble’s principles:

The function of the proper political design of a republic, is to create the combined social and physical preconditions, under which the development of the creative powers of every individual (as Plato, Leibniz, and Gauss defined “powers”) is fostered, and in which those with developed such sovereign creative powers of the individual mind, from whatever prior station in life, are steered into opportunities to supply society as a whole with the performance of those functions which the creative scientist, entrepreneur, and workman bring to the social-economic process.

There is no way to calculate arithmetically the value of such persons and their work; we must rely on producing such persons, and affording them the circumstances to do their work. We measure economic growth, not in simple arithmetic magnitudes, but in powers. Each such power is expressed in the form of a discovery of a universal physical principle.... It is the accumulation of the combined, transmitted, and new discovery of such principles, as powers, which defines human progress scientifically. Therefore, the most profitable form of national economy is known to be the type of science-driver program which U.S. President Kennedy motivated.

Our economy was intended to be developed as an instrument through which to bring the creative powers of the sovereign human individual into play, as the reigning feature of our medium- to long-range policy decisions. This is the intention of LaRouche’s Four Laws, based on the principles of the American System:

2. Return to national banking, as defined by Alexander Hamilton, and reflected in Lincoln’s Greenback policy and FDR’s Reconstruction Finance Corporation to provide directed credit to the physical economy.

3. Direct trillions of dollars of federal credit toward high-productivity and high-technology investment in 21st Century infrastructure, manufacturing, and technology. 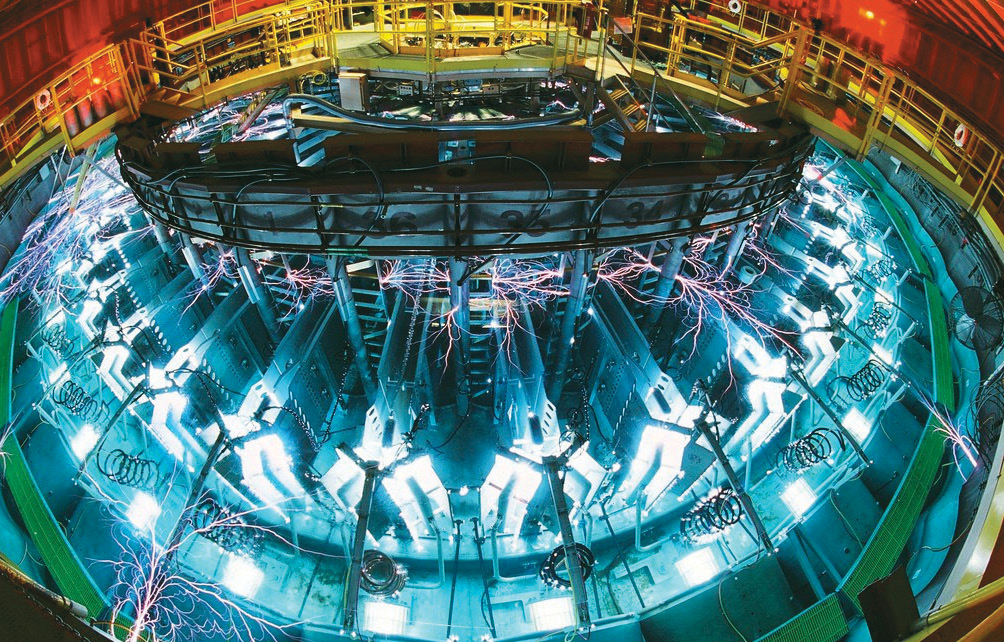 LaRouche long asserted that it would take an alliance of the United States, Russia, China, and India, to come together, to put the existing Wall Street/City of London-run global financial system into bankruptcy reorganization and to replace it with a New Bretton Woods, modeled on the intention of Franklin Roosevelt’s policies for an anti-imperial post-war world. This system would provide long-term, low-interest credit for development of the world, based on relations among sovereign nation states, ending the casino economy in which whole sections of the world remain impoverished and enslaved while a decadent elite flourishes.

Russian President Putin has proposed a “P5” summit of the permanent members of the UN Security Council for September 2020. The U.S., Russia, and China would be joined by France and by Britain, whose Conservative Prime Minister Boris Johnson just upset the monetarists’ fiscal austerity apple cart by proposing to “build, build, build” his nation’s way out of the economic crisis with an FDR-style New Deal. In the current environment of British escalations of dangerous tensions between the superpowers, this summit is urgent and should become the first step in a path to LaRouche’s New Bretton Woods. And, because of the global nature of this pandemic, the United States must work with other major nations, most especially the other major economy in the world, China, to ensure that every nation will have the necessary health infrastructure to defeat this virus. 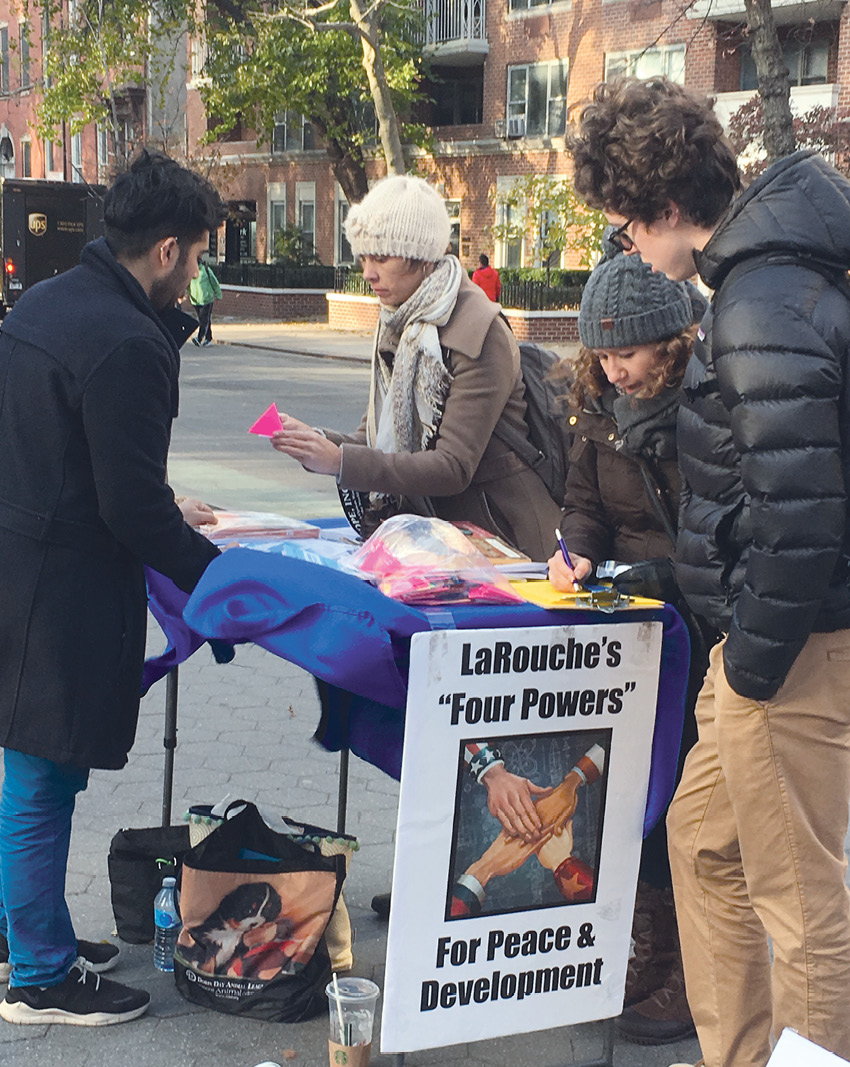 Step Onto the Stage of History

To understand the danger and the promise of the days ahead, reflect on what Abraham Lincoln accomplished, by not only preserving the Union, but by reestablishing the American System—during a Civil War!—and unleashing a mighty industrial revolution that became the paradigm for the world. By the onset of the 20th Century, several nations, including Russia, Germany, and Japan, had modeled their economic policies on the American System … by name! Sun Yat-sen, inspirer of the 1911 Chinese republican revolution, was also dedicated to the American System, by name!

The response of the British Empire to the possibility of a world of sovereign nations, cooperating with each other for the economic advance of mankind, has been assassinations, coups, fascist insurrections, and perpetual wars. The 20th Century and the opening decades of the 21st Century have been dominated by endless Empire-provoked wars, unleashed to prevent such a new paradigm for mankind.

Imagine instead, the nations of the world joining forces in exploring and developing our solar system. The summer of 2020 has seen American rockets return Americans to the International Space Station to join their Russian counterparts, and has seen multiple missions to Mars launched by the United States, China, and the United Arab Emirates. Pushing the frontiers of human knowledge and extending our dominion over nature is the essence of LaRouche’s Fourth Law, and provides the basis for mobilizing our economy, our population, and especially our youth to create the actual wealth and the cultural optimism that foster further human discovery and creativity. International cooperation in space lays the basis for securing genuine peace, based on the common aims of mankind.

This is our 2020 mission. We are asking you to take these demands to the nation’s constituency leaders and to your fellow citizens and, like the Committees of Correspondence, which communicated the profound ideas of the American Revolution, to help us create the historical and scientific literacy in the population to save the nation. If we succeed, the actions taken now, and the decisions made this year, will complete the mission of our founding fathers, and finally crush the British Empire.