The Great Swindle of the Next Generation EU Fund 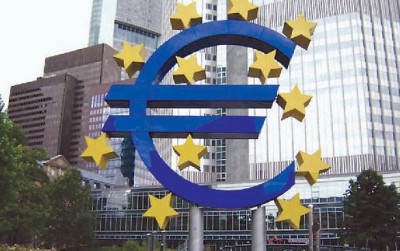 public domain
With its “Next Generation EU” fund plan, the European Union is responding to the demands of the financial oligarchy to further dissolve the sovereignty of its member nations.

Aug. 7—The official narrative on the results of the second longest summit of the European Council, which gathered the heads of state and government of the European Union (EU) from July 17 to 21, is that the EU finally showed its power of action, bringing EU leaders to overcome national interests. They finally agreed to an “ambitious” response to the economic consequences of the COVID-19 pandemic, with a combination of grants and loans to member countries in a spirit of solidarity. However, this is pure fiction.

The EU response, a 750 billion Euro plan pompously named “Next Generation EU” (NGEU), comes too little too late. When the pandemic broke out in Italy last February, the EU was unable to coordinate a common response, and Italy was left alone while its partners were hoarding medical equipment for themselves. Then came the lockdown and the productive shutdown, each country implemented its own program of aid to firms and families. The only good thing the EU Commission did was to lift treaty constraints on new debt—which all countries had violated anyway—in order to allow the financing of unemployment, short-work checks, and bridge loans to companies.

Since then, national economies have seen the biggest economic collapse in postwar history, with gross domestic product falling by 10.1% in Germany from April to June compared to the previous quarter, 13.8% in France, 12.4% in Italy, and 18.5% in Spain.

This is the time for a massive investment program, to put people back to work and avoid a general bankruptcy of the productive sector. This is the moment when money—mostly in the form of credit—must flow into the real economy in order to steer a recovery. But no money from this marvelous Next Generation EU plan will flow before mid-2021, when it is too late. So, what is it about?

The plan is to issue up to 750 billion in “Euro bonds” on the financial markets, to finance grants (290 billion) and loans (360 billion) to EU member countries over a seven-year period. Those grants and loans are to be repaid starting in 2028 out of the EU budget, which will accordingly be stuffed with increased member quotas and direct taxes. On the latter, the Conclusions of the July 17-21 summit say:

The Union will, over the coming years, work towards reforming the “own resources” system and introduce new “own resources.” As a first step, a new “own resource” based on [taxation of—ed.] non-recycled plastic waste will be introduced and apply as of 1 January 2021. As a basis for additional “own resources,” the Commission will put forward in the first semester of 2021, proposals on a carbon border-adjustment mechanism and on a digital levy, with a view to their introduction at the latest by 1 January 2023. [box: Malthus as Central Banker: The European ‘Green Deal’] In the same spirit, the Commission will put forward a proposal on a revised ETS (Emissions Trading) scheme, possibly extending it to aviation and maritime. Finally, the Union will, in the course of the next MFF [Multiannual Financial Framework], work towards the introduction of other ”own resources,” which may include a Financial Transaction Tax. The proceeds of the new “own resources” introduced after 2021 will be used for early repayment of NGEU [New Generation fund—altogether EU1.8 trillion] borrowing. 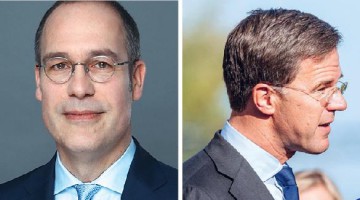 Representative of many pro-European Union economists who welcomed the decisions of the EU Council, Commerzbank chief economist Jörg Krämer, stressed that a fundamental change has occurred in the nature of the European Union. “For the first time the EU can issue debt in the capital market on a large scale,” Krämer said. “This will not be a one-shot thing. If a new, severe recession comes, or if it is demanded by new challenges such as climate change, it is very possible that the EU will again get into debt on a large scale.”

The march of the EU toward becoming a super-state is also seen in the highly intrusive character of the conditions attached to the NGEU grants and loans. These conditions demand programs for investment reforms and structural reforms (changes in labor laws, pension provisions, etc.), which will be monitored and evaluated by the EU Commission on their merit, cost, modalities, and results. Investment projects must be coherent with the EU guidelines for “decarbonization” and are to be completed within seven years, whereas “reforms” must be completed within four years.

Furthermore, the Growth and Stability Pact, a treaty which binds member states to a balanced budget, has been suspended but not cancelled. It is to be expected that sometime next year, it will be reactivated. Then, monitoring of each nation’s finances by the European Commission will be added to the conditions just described.

All this is downplayed by the “more Europe” faction supported by the financial oligarchy. This faction emphasizes the advantages of borrowing money through the EU at the lowest possible rate on the financial markets. In the case of Italy, which was the destined recipient No. 1—as being, together with Spain, the most hard-hit country by the consequences of the pandemic—the more-Europe leaders boast that according to calculations, Italy is entitled to receive up to 209 billion euros in grants and loans. Italian Prime Minister Giuseppe Conte, for example, claims that the result of the EU summit was his personal victory. 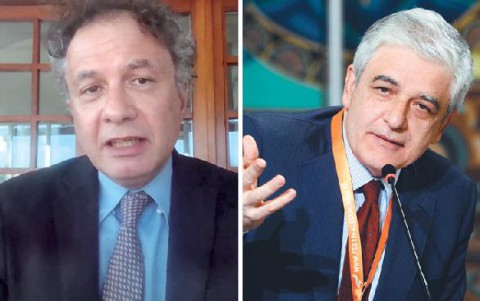 Left: Schiller Institute; right: CC/Niccolo@ag Caranti
Italian economist Michele Geraci, and Giuseppe Pisauro, Chairman of Italy’s Parliamentary Budget Office, have both determined that Italy will only get “peanuts” from the new “Next Generation EU” fund.

Main Target Country To Get ‘Peanuts’

Two prominent experts, economist Michele Geraci and Parliamentary Office of Budget Chairman Giuseppe Pisauro, made some calculations and came independently to very similar conclusions, that in reality, Italy will get “peanuts” from the EU fund.

In an article published by the financial daily Il Sole 24 Ore, Geraci shows that Italy’s net gain will be only EU23 billion. On paper, Italy is entitled to receive up to 20.4% of the total EU390 billion in grants. This is EU80 billion. However, Italy must pay its contribution to the “Next Generation EU,” which is EU50 billion, according to Italy’s 12.8% capital share. Furthermore, Italy must pay part of the rebates which were given to the five countries that opposed the fund—during months of bitter wrangling over it—in order to buy their consent. Its share of those bribes is EU7 billion. According to this rough calculation, the net amount of grants remaining for Italy is EU23 billion, to be spread over 7 years (the duration of the EU budget): a mere EU3.3 billion yearly. Budget chairman Pisauro reported a slightly higher figure to the Italian Parliament’s Joint Budget Committee. He put the amount of grant money assigned to Italy at EU87 billion, and said its obligation would be lower: EU41 billion. This means that the country’s net gain from the grants is EU46 billion, in yearly installments of EU7 billion per year.

Whether EU3.3 billion or EU7 billion per year, this is less than what Italy has been able to borrow for itself on the capital markets each month in 2020, and that at a low yield.

What’s more, the grant money must be advanced by the member country receiving it and will be reimbursed by the EU only if the member country complies with the constraints attached! This means that if the programs and the “reforms,” either in their content or in their implementation, do not satisfy EU scrutiny, Italy will merely have given itself a grant. This goes of course also for Spain and all EU member countries that want to apply for those funds.

Meanwhile, the group of countries that had opposed the fund got fat rebates that artificially lowered their share of contributions to the NGEU. The Netherlands, leader of the five, got a rebate of 1.9 billion, which is a 78% reduction of its current net position. The Netherlands is a net payer of EU2.46 billion to the EU budget. Similar rebates have been given to Sweden (1.069 billion), Austria (565 million), Denmark (377 million) and even Germany (3.671 billion). These funds are bound by no conditions.

Thus, the EU is not responding to the pandemic and economic crisis at all. The amount of funds is insignificant and is going to come too late to revive the economy, build public health facilities, or any other infrastructure for recovery. Rather, the EU is responding to the long-stated demands of the financial oligarchy centered in London, that it take power away from the sovereign nations of Europe. The EU is thus acting a as super-state with its own budget, borrowing power and means to control economic investments and conditions in Europe absolutely.

This super-state is not so stingy with the megabanks and the hedge funds. Whereas EU member countries must wait until mid-2021 to receive some money from the celebrated Next Generation EU plan, the European Central Bank (ECB) is printing dozens of billions of euros every week to finance the psychopaths of the financial market. The European Central Bank has injected 715 billion Euro into the financial system in the month of July alone, both in loans to banks and in purchases of corporate and government bonds. The ECB’s current rate of monetary injection is more than a thousand times that of the flow of funds to Italy, which is set to begin next year.

Something is certainly rotten in the super-state of Europe. 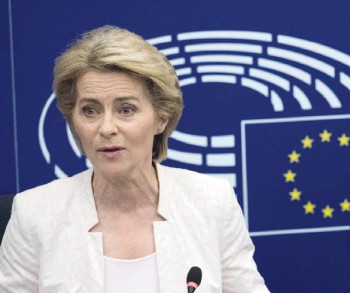 In her inaugural speech to the European Parliament on July 16, 2019, newly elected European Commission President Ursula von der Leyen announced her “Green Deal” blueprint to make Europe “the first carbon-free continent by 2050.” The plan was officially presented at the European Council of heads of state and government, and is now at the core of the so-called “New Generation EU” recovery plan.

The Green Deal consists of policies to be adopted in all sectors, some of which sound like “we love our mother”—benign platitudes such as “eliminating pollution,” “the need for a cleaner construction sector,” or “clean energy.” More suspicious are the chapters in which the word “sustainability” pops up, such as, “ways to ensure more sustainable food systems,” “sustainability in EU agriculture and rural areas” or “sustainable industry.” The word “sustainability” hides Malthusian policies aimed to prevent the use of technology for the benefit of society and to make nature itself more productive.

In von der Leyen's sick view, Europe should become industrially desertified, dependent on weather conditions for production of energy, and able to sustain only a portion of the current population.

The “decarbonization” of the European continent is supposed to be accomplished in the Green Deal by diverting financial flows from the so-called “carbon economy” to “carbon-free” investments. This will be implemented by creating “green assets”—a new financial bubble, which the psychopaths of the financial markets hope will bail out the financial system and their fortunes. Mastermind of the new “Green Finance” is former Bank of England governor Mark Carney; other former central bankers now working for BlackRock LLP call it a “regime change” in global finance. (EIR has published a profile of Mark Carney.

The “New Generation EU” scheme is the first step in forcing governments to submit to this economic “regime change,” by surrendering fiscal sovereignty to the Malthusian goals of the Green Deal. [back to text]