This article appears in the August 28, 2020 issue of Executive Intelligence Review.

Asking the Wrong Question for 60 Years 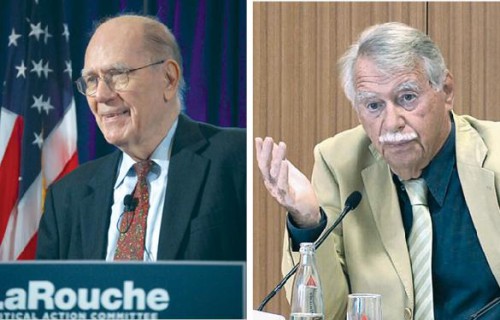 Deniston’s article was first published on the LaRouche PAC site and is available there with animated graphics.

Aug. 19—A recent article by Whitney Clavin at the California Institute of Technology caught my attention.

The article, “Famous Economics Experiment Reproduced Thousands of Times,” and the study it’s based on, call attention to the highly problematic nature of popular discussions of economic theory in the United States today. Rather than endless discussion about supply and demand and free markets, it would be far more useful to study the vast global economic benefits of a Moon-Mars colonization program. To do this competently, the axiomatic problems of modern economic thought need to be highlighted, removed, and replaced.

The article in question opens:

In an open marketplace, such as a farmers’ market where produce and other goods like candles and flowers are exchanged for money, the ideal prices for both consumers and sellers will quickly emerge…. This phenomenon, which is related to the law of supply and demand, was demonstrated experimentally starting in the 1960s....

Now, nearly 60 years later, Caltech economists have analyzed data from 2,000 repetitions of these experiments, from researchers around the world, to demonstrate for the first time [this] is reproducible on large scales.

I could think of some far more productive and useful studies for these researchers to dedicate their time to. As Lyndon LaRouche spent most of his adult life emphasizing, discussions about economics are far too dominated by studies and speculations about markets and buying/selling behavior. Those studies have their place (I guess), but the far more interesting (and far more important) question is that which Mr. LaRouche tackled: What is the science of economic value and long-term growth?

From that standpoint, is there any relation between open market prices and true economic value?

This is an opportunity to highlight an August 2005 paper by Mr. LaRouche, “LaRouche Comments on Professor Hankel and Himself,” published in EIR, Sept. 2, 2005, where he addressed the issue of price in some depth. He wrote:

The effect of those indicated errors in the thinking of the usual economists and relevant others, is that the monetarist and related pricing theories commonly used heretofore, have nothing to do with what might be considered as an actual economic science, or even a merely sane method of management of governments and their associated economies. They have more the character of debates over doctrines among the factions within some pagan religious cult, a cult based upon superstitious belief in sympathetic magic, of doctrines crafted with the apparent intention of persuading the slave to accept his destiny, rather than representing any thoughtful attempt to demystify the paradoxes of national economy in the real world of today.

Economic reality lies in the physical outcome of the applied powers, i.e., discovered universal physical principles, employed on behalf of the physical expenditures required to produce that thus-increased physical outcome. The role of money, as an instrument of exchange and credit, must be efficiently subordinated to the real-economic, i.e., physical, objectives of national economic policy. 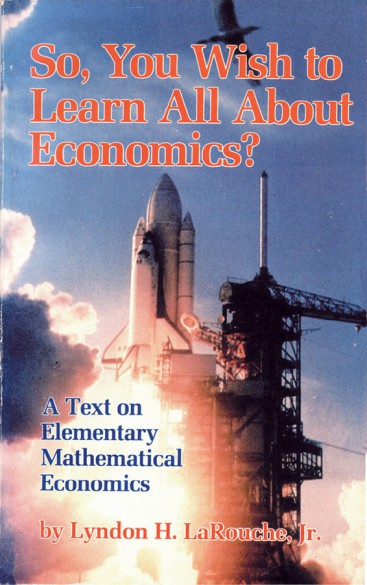 The ABCs of Physical Economic Science

Mr. LaRouche wrote about the “real-economic, i.e., physical, objectives” of economic policy more times than I can probably count, but his 1984 economics textbook, So, You Wish to Learn All About Economics? is always a good reference to go back to, with an emphasis—respecting the subject of this article—in Chapter 4, “The Definition of Economic Value.”

If you don’t own a copy, definitely pick one up for ten bucks. A Kindle version or a paperback is available here, or you can get an EPUB or Kindle version here.

A scientific definition of economic value requires treating the whole economy (national, regional, or international) as a unity, and studying it as a thermodynamic system which produces its own energy of the system requirements to maintain its operations (a closed thermodynamic system). For an economy studied in this way, the energy of the system isn’t energy, per se, it’s the physical goods needed to maintain the population and the productive process of the economy at a constant relative level of technology and living standards. Food, electricity, automobiles, clothing, machine tools, water infrastructure, roadways, and so on—these are both the products of the productive process, and the inputs required by the productive process (the energy of the system is identified as V + C + D in LaRouche’s analysis.) These basic categories and the process is described in Animation 1 on the LPAC website.

Only a limited section of the labor force is directly involved in the production of all the physical goods used by society, the productive operatives. Everything produced above the energy of the system requirements is net operating profit (Sʹ , which is the free energy available for investments to raise the economy to levels above the status quo maintained by the energy of the system.

Individuals participating in open markets in rural or inner-city America might converge on a market price for oranges or opioids, but what does that tell you about the ability of the entire economy to sustain the population and grow?

For the economy (viewed in these thermodynamic terms) there is no steady state, the economy is always either moving in an entropic or negentropic direction—the notion of “sustainability” (the rebranding of “zero-growth”) is a dangerous myth.

Any economy that tries to maintain a fixed level of existence—a zero-growth policy—will be using up the relatively highest quality natural resources available, resulting in transitions to lower quality and/or less accessible, i.e., more expensive, deposits of those resources.

This means that the economy has to exert more effort to produce the same energy of the economic system requirements, just to maintain the economy at existing levels—greater portions of the energy of the system are consumed in the productive process, and a larger allotment of the productive labor force is required to produce the same level of output as the previous cycle (leaving less workers available for necessary overhead). Less and less of the total output is available for free energy investments, and, eventually, the energy of the system can no longer even be produced, forcing the economy into a collapse mode—the “sustainable” (zero growth) economy marches towards an entropic breakdown.

This zero-growth entropic process, leading to catastrophic population collapse, is illustrated in Animation 2 on the LPAC website.

To overcome the effects of the depletion of a given set of resources, the continued existence of any economy requires technological progress—resulting in increases of the productive powers of the labor force—and scientific revolutions—redefining mankind’s relation to the natural world and so-called natural resources. (Space program anyone?)

This is the only scientific basis to define economic value, and, thereby, the way to approach pricing from a scientific standpoint.

For the productive operatives segment of the labor force to operate at a level of physical productivity sufficient to keep the economy in a negentropic mode, they must be able to afford both the capital goods (C) employing sufficient levels of technology and the consumer goods (V) required to sustain their households—including their household’s production of a new generation of productive operatives capable of utilizing current and future technologies (the disastrous nature of globalization and cheap labor policies become fully evident when economics is properly understood from this standpoint).[fn_1]

As Mr. LaRouche states in the above-cited 2005 paper,

The determination of price must be governed by first consideration to the conditions of life and work of the total national labor force, with its associated households, not only within respective nations, but, more and more, on a global scale. This determines the idea of the magnitude of private income as complemented by essential public and related services to households. This estimation of the total physical price of labor, so defined in terms of households, is compared with the product of the labor of those households: basic economic infrastructure, agriculture, manufacturing, and essential services, including those supplied by government.

This configuration must be described from the standpoint of several factors, including physical-capital formation, and rates of generation of and application of science-driven technological progress. The further refinement of the division among those assorted components, should be programmatic. Such a program has two leading, overlapping distinctions. Division of labor, within and among these categories, as defined according to the requirements of fulfilling an adopted national mission of a certain rate and direction of physical-economic increase of the productive powers of labor. The mission-orientation of national economic and related policy is not present to future, but future to present: a sane society creates the basis for a future which the present must overtake.

And, a bit earlier, in the same paper:

The development of these broad objectives is required for a dynamic approach in policy-shaping, to improving the physical productive powers of labor per capita and per square kilometer of territory. On this and related accounts, the best experience of the past shows that government can become informed to the degree that it can foresee general lines of forward development of technology, and can assemble the expert advice through which to assess the general rate at which such progress might be enabled to occur. The U.S. space-program, as it operated through the manned Moon-landing program, is a demonstration of the way in which science-driver “crash programs” have the effect of a “spill-over” into increased potential productivity of labor within the economy at large. 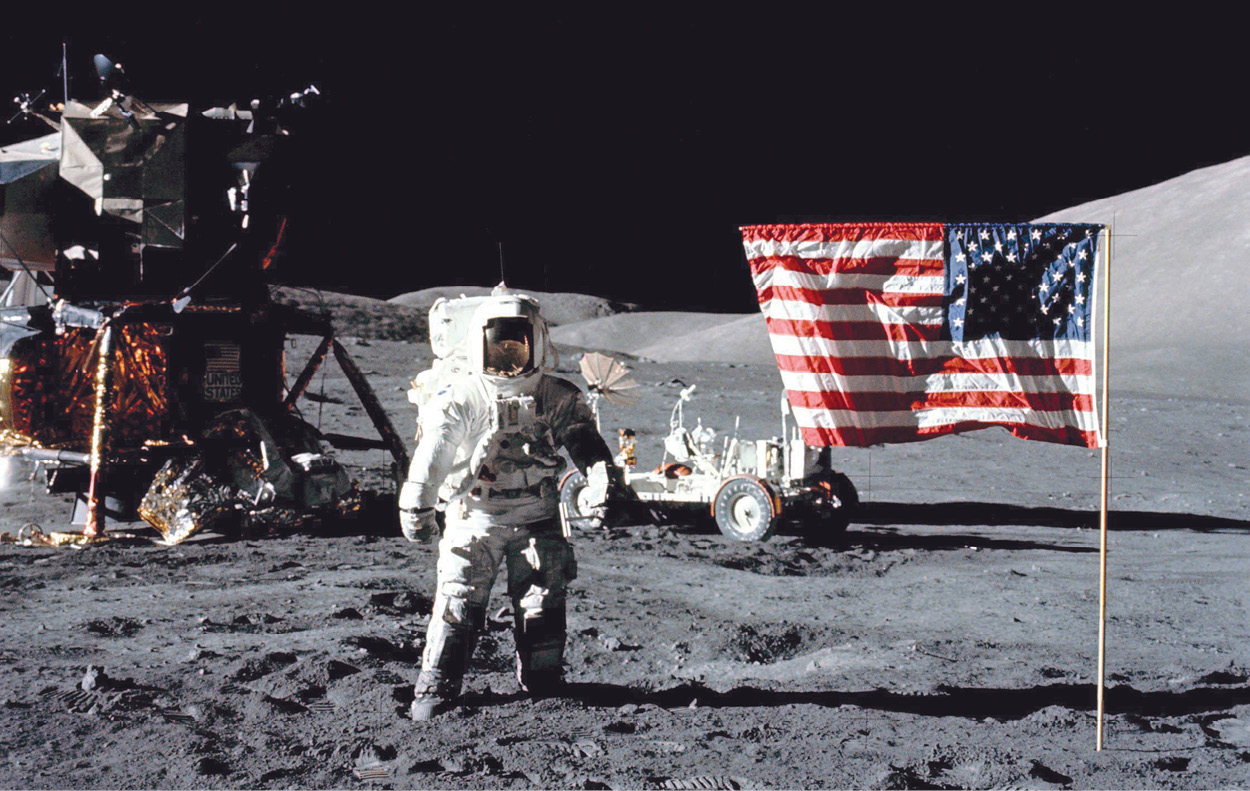 NASA
Astronaut Harrison “Jack” Schmitt poses on the surface of the Moon beside the U.S. flag, as part of the Apollo 17 mission, December 11, 1972.

The mission-oriented crash program to put mankind on the Moon drove the development of a vast array of technological breakthroughs, which were then made available for general manufacturing use throughout industries not related to the Apollo program. In terms of Mr. LaRouche’s approach, these new technologies were incorporated into the designs of new capital goods (C), increasing the productive powers of labor of the productive operatives who utilized the more advanced capital goods during the productive process. 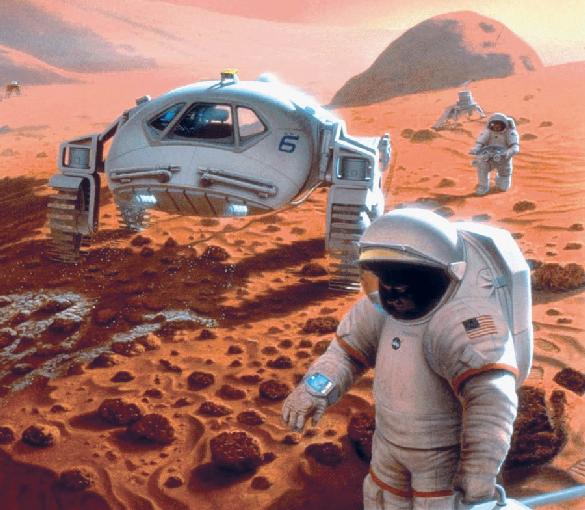 Back to the Moon, and On to Mars

President Trump’s revival of a manned mission to the Moon has the potential to become the most important crash program to drive the economy forward. In 2009, Mr. LaRouche began again to advocate for a global effort for the industrial development of the Moon and human missions to Mars, as the keystone program of a new global economic order led by the collaboration of sovereign nations, overtaking the control of the globalist financial system rooted in the City of London. That mission is still key today.

Market prices are what they are, but studies of such shouldn’t be called economics. The important issue is true physical economic value, defined by contributions to the negentropic growth that’s necessary for human survival. It is time for LaRouche’s science of economics to govern policy, otherwise the U.S. population will continue to pay the price for bad policies.

[fn_1] Mr. LaRouche includes some discussion of this in his August 2005, “LaRouche Comments on Professor Hankel and Himself,” published in EIR, Sept. 2, 2005:

The advantages some Asian nations appear to have secured through globalization of “free trade,” involve setting the prices of their exports to the world market below the level of national export income required to relieve the economic oppression, which is often worsening presently, among those, or similarly situated other nations’ poor. This aggravation of poverty of the great mass of the poor, reflects the effects of the margin of price-advantage for export by these nations, on which those nations actually depend, presently, for a marginal factor which past economics convention has termed “primitive accumulation”: the augmentation of the relative income of the nation, through the looting of a relatively enormous part of its own, or other nations’ territory and population. [back to text for fn_1] 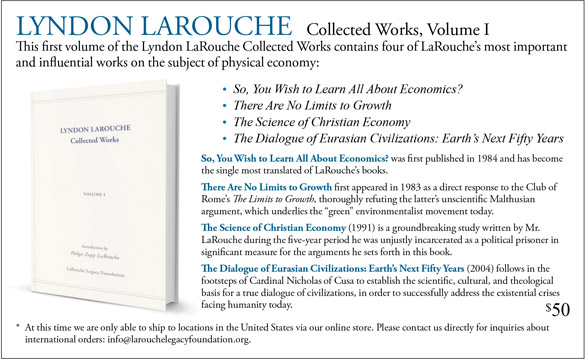