100 Seconds to Midnight:Taking Seriously the Threat of Nuclear War

This is the edited transcription of the prerecorded remarks by Mr. Sieff to the Schiller Institute conference on September 5. He is Senior Foreign Affairs Correspondent, UPI; and Senior Fellow, American University in Moscow. 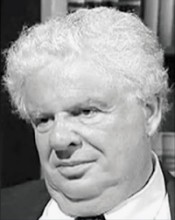 We are 100 seconds to midnight. That is how close the Doomsday Clock of the Bulletin of the Atomic Scientists has set the dangers of thermonuclear war. We are going to get a lot closer. The 100 seconds to midnight warning was announced on January 23rd this year. Yet, I doubt today whether five of the one hundred sitting United States Senators from both parties know that fact, or take it seriously for a second. It is this astonishing ignorance, a psychological mechanism of willful ignorance and denial, that Sigmund Freud himself would be hard put to explain; that is our greatest danger.

As I speak, the United States and NATO push ahead with the reckless, all-too-consistent policy of driving east and south to encircle Russia with states whose legitimate, long-standing governments are being toppled, and are being replaced by non-democratic, at best chaotic, regimes from giant Ukraine to tiny Georgia; Belarus may be next. And NATO regularly carries out full-scale military exercises unabashedly aimed against Russia, with such reassuring titles as “Anaconda.” What is an anaconda? It is a colossal, 20-30-foot-long fearful snake in the Amazon jungle that first encircles its prey, then crushes and devours it, often still alive. This, then, is a strategic message we have been sending to Russia, one of the two most powerful nuclear powers on our planet. Russia has responded. The development of hypersonic weapons that the West cannot yet match is one last tolling of Thomas Jefferson’s fire bell in the night.

A second, and most grave development is the shifting of Russian strategic forces to a potential first strike posture. The Russians do not seek to conquer the West or the world, but they are truly fearful that the West is determined to conquer them. And every message that flows out of the Republican and Democratic national leaderships alike, and Congress and think tanks, is consistent with this message. We should not, therefore, be surprised that the Russians have responded as they have. The Russians’ Sputnik News Agency noted this past Wednesday, “Recently, episodes of aircraft interception over the Baltic, the Black, and the Bering Seas have become more frequent. On 31st August,” the Sputnik report continues, “three Russian SU-27 fighters were scrambled as three U.S. B-52 strategic bombers approached the Russian state border over the neutral waters of the Baltic Sea. The bombers were accompanied until they changed course and moved away from the Russian border. On 1st September, a Russian Northern Fleet MIG-31 was scrambled to accompany a Norwegian P3C Orion reconnaissance aircraft.”

Hysterical, always unsubstantiated claims that Russia is interfering in our domestic election cycle could not be more misplaced. In 1996, the Clinton administration proudly and openly boasted of decisively swinging the Russian Presidential election to re-elect Boris Yeltsin, a drunken, corrupt, incompetent under whose leadership untold millions of Russian people died of hardship in an economic depression far, far worse than our own Great Depression, and that lasted as long. I know, I was repeatedly there for long periods as a foreign correspondent; I saw it with my own eyes. The Russians remember this. They are determined not to let it happen again. They are determined not to let their country be dismembered. Yet the U.S. body politic, its policy-shaping institutions, and media remain locked on their mad, suicidal course of needless confrontation and childish, fake macho bullying and posturing towards Russia. It is time they woke up.

May this most welcome and urgently needed conference serve as that vital wake-up call.