This is the edited transcription of the opening remarks by Mr. Jatras to the Schiller Institute conference on September 5. Subheads have been added. 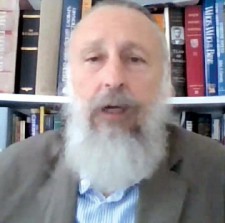 I am a retired U.S. diplomat and a former policy advisor to the U.S. Senate Republican leadership. I am honored to be invited today, to speak to this Schiller Institute conference on the kind of future we can expect internationally, and we shall be striving for, in light of the very, very dangerous situation the world and our country now find itself in. I’d like to thank the Schiller Institute and the LaRouche organizations, in particular, Mrs. Helga Zepp-LaRouche, for inviting me to participate, along with my good friends Edward Lozansky, Martin Sieff, and many other distinguished speakers.

I don’t think it’s necessarily appropriate for us to get too partisan in a gathering like this, but I do think it is appropriate to note that our country is facing a watershed election in November. And of course, they tell us every time that this is the most important election of our lifetimes, and maybe each one is, but I think very few people can be unaware of the stakes that are presented to us in November.

On the one hand, we have somebody like Joe Biden, who has been in favor of every war that this country has gotten involved in, especially in the post-Cold War period, during the many, many decades that he was in the U.S. Senate, and then later as Vice President, where he played an instrumental role, by the way, in the attack on Libya. During the 1990s, when he was a Senator, and I was working at the Senate there at the time, he was one of the primary militants on the Democratic side in our involvement in the Balkans wars. And then, of course, was a strong proponent of the 2003 war against Iraq, under the Bush Administration, where he, along with Hillary Clinton were instrumental in whipping Democratic votes in support of that misguided effort.

On the other hand, we have President Donald Trump, who in 2016 ran on a platform of ending the endless wars, in which we have intruded ourselves during these decades, and also getting along with Russia, getting along with China, to serve the interests of the American people first, in a constructive global order, rather than this mindless and ultimately suicidal quest for global domination—what Bill Kristol and Bob Kagan back in 1996 called “benevolent global hegemony”: The idea that it is the mission, the duty, the right of the United States, as the hyper-power, as the unipolar power, to impose its will on the rest of the globe.

That, unfortunately, is still the stark choice that is presented to us today, despite the fact that, by and large, Donald Trump has not followed through on his promises.

Now, I am not one of these people who says, “Oh, he was a fake, he was just carrying water for the same interests as everybody else. It was a scam.” I think in his heart of hearts, and even with regard to much of what he says, he wants to follow through with the promises that he said he wanted to.

For example, the suggestion has been made by Ed [Lozansky] and me, and many others, that it is imperative for President Trump to sit down with President Putin of Russia, President Xi of China, and maybe Prime Minister Modi of India, to come up with a stable global order, an understanding among the major powers, about how we can move forward constructively, toward a more positive future for the rest of mankind, rather than continue to go down the road of confrontation, that in the end can only lead to a conflict, the consequences of which are literally incalculable.

So, I would hope he would use the upcoming opportunity of the UN General Assembly to meet with his Russian and Chinese and Indian counterparts; if not then, to try to schedule a summit as soon as possible, if, after—at least in my opinion, hopefully—he does win this election, and there’s some promise for the future, then.

I think, when we look at the failure of his administration [to do what] he promised us—and I think this is something that Bill Binney has done some absolutely tremendous work on—that part of that explanation has been that this full-court press from the deep state and its corporate sponsors, to make sure that no such rapprochement can occur between the United States and Russia and China, and of course, the heart and center of that was this lie about Russian meddling, Russian collusion, that Russia stole emails from the DNC server—and aside from the fact that nobody disputes that what was shown in those emails is true; about how the Democratic National Committee did put a thumb on the scale to ensure that Hillary would be the nominee, rather than Bernie Sanders—nobody even disputes that.

I don’t know how people necessarily object to true information, which is being made available to the public about how corrupt at least one of the parties is (although, frankly, I don’t think the other one is much better), information that it is indisputable—as Mr. Binney has shown—that there was no hack! There was no outside stealing of DNC emails; these were downloaded at speeds that would have been impossible from the outside, and the files must have been taken down by somebody inside the DNC, who was a leaker. It was not an outside download from some hostile, foreign source.

Nonetheless, and I know there are people on my side of things who will say, “Well, this has all been debunked now, Russiagate has been completed undermined.”

We now live in a fact-free society, in a clown world, where facts don’t really matter any more. The facts, as Mr. Binney and others have adduced them, have been available for a couple of years now, and nobody cares! The media still keep repeating the same lies, the band plays on, the Democrats make the same accusations, and, indeed, most of the Republicans stand by the same accusations of so-called “Russian meddling.”

When all is said and done, the sad fact is, is that Mr. Trump is not really in control of the apparatus of his own government, that the same actors, the same policy, the same constant push for global domination against two other major powers—Russia and China—continues.

We have the effort to take Iran off the table, as another country that is independent of U.S. policy and is committed to Eurasian integration.

Rather than trying to undermine Eurasian integration, through these means, through these endless threats of war, and sanctions, and subversions—I would add to that, by the way, the cranking up of what appears to me a jihad in Xinjiang on behalf of the Uighurs here; yes, I’m sure there are some things that the Chinese are doing, that are rather unpleasant, but the Chinese are very serious about their security, and if anybody’s going to be aiding a kind of jihad movement there, the Chinese are going to react to that very sharply. None of this serves the American interest.

To my mind Eurasian integration would be a good thing. The completion of the Nord Stream 2 pipeline would be a good thing. And the only question for us as Americans should be: “Why aren’t we doing the same thing?” Why aren’t we building our own Belt and Road Initiatives, here in the Western Hemisphere? Why are we not connecting that up with the Eurasian grid, through the Bering Strait as Lyndon LaRouche suggested decades ago?

The Stakes Could Not Be Higher

So, I think there is much very positive that President Trump would have to discuss with his Russian and Chinese and Indian counterparts. I hope that the political stars can align, so that he is able to do that, and actually move along constructively on an agenda like that.

And I fear, unfortunately, if the election goes the other way and we have Mr. Biden and Kamala Harris—really more Kamala Harris than Biden, I think, running things; and the likes of Nicholas Burns at the State Department and Evelyn Farkas at the Pentagon—which my sources tell me is a “done deal” if Mr. Biden and Senator Harris win—we’re looking at an unavoidable path toward a major world conflagration.

So, the stakes could not be higher, and I think the organizers of this conference have put together at least a hope for a more constructive and peaceful agenda for the world.