Which Way for America: World Hegemon orPartner for Win-Win Cooperation?

This is the edited transcription of the pre-recorded remarks by Mr. Lozansky, as prepared, for the Schiller Institute conference on September 5. He is the President of American University in Moscow and Professor, Moscow State University and the National Research Nuclear University. Subheads have been added. 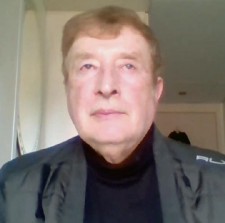 Thank you very much for inviting me to speak at such an important event. I’m now on the Volga River, in the middle of Russia. For those who don’t know Russian geography, it’s like the Mississippi in the United States. I’m on a river cruise, and really enjoying the scenery.

But, also, I’m worried. I’m worried about what’s going on in the United States. Actually, I’m waiting for my plane to go, because our plane keeps cancelling, because of this COVID-19. And my recent flight was cancelled just a few days ago, so I’m still waiting.

Anyway, the theme of today’s talk is “Which Way for America? World Hegemon or Partner for Win-Win Cooperation.” And I think this is something that is the subject for the conference. And we’ve been waiting for elections, and when I say “we,” I am now a U.S. citizen. I used to be a Soviet citizen, but I came to the United States a long time ago, in 1977, so it’s 40 years. So, I think I still have my accent, but I am American, and I plan to vote. And I know for whom, although I’m not very happy with all the candidates, and I’ll try to explain you why.

Decisions that will affect not only just America, but the lives of countless people across the world, because America is so powerful. It’s really the most powerful nation on Earth. So whatever happens in our country will affect many other people.

And some experts believe that this election is not just about American politics, but maybe we’re talking about a new international world order; some say, even existential questions of war and peace that will be decided.

So, we hear now in the media that many such experts try to rush their opinions, in the hope of somehow influencing the results. But frankly, when it comes to foreign policy, I don’t see too much difference in the position of establishment Democrats or Republicans.

I have to say, immediately, that I am Republican, I voted for every Republican candidate from Ronald Reagan on, and of course, I voted for Trump. But right now, what we see is that most Democrats and Republicans, they still want America to be the leader—remember, the title of my talk is “Global Leader, Hegemon or Win-Win?” But I see there is not too much difference.

The only difference I see is because sometimes, maybe Republicans see that China is the bigger threat than Russia, but Democrats think that Russia is a bigger threat; but still, most really want to keep U.S. hegemony—“keep,” although there is some doubt that this hegemony still exists.

Sleepwalking into a Thermonuclear Holocaust

Now, Democrats, really, they use Trump’s 2016 statement about ending wars started by George W. Bush and Obama, as a sign that he is a Putin agent, and therefore he’s not interested in U.S. hegemony. Biden, on the other hand, he will restore pre-Trump status quo. How, frankly, though it’s true that Trump hasn’t started a new war, he didn’t finish a single one, either, always trying to prove that he’s much tougher on Russia than Biden, which is probably true. He has to prove that, otherwise he will be repeatedly accused of being a Russian agent.

But, although it’s also true that most of the anti-Russian sanctions have been pushed by Congress, Trump had really made his share as well, and I think he has to take at least some responsibility.

According to over 100 top U.S. geopolitical experts, in the recently published article in Politico—among them are really such great people whom I admire as U.S. Secretary [of State] George Shultz under Reagan, Pentagon head William Perry, Sen. Sam Nunn, so we’re talking about a bipartisan group; two U.S. ambassadors whom I know personally, Tom Pickering and Jon Huntsman—they are talking that we are sleepwalking into nuclear catastrophe. So, it’s not just some journalist or some publicity seekers: We’re talking about very serious people.

And, Don Trump is our President, so under his watch, we are actually sleepwalking into nuclear catastrophe.

Now, at the same time, what does this restoration of the status quo under Biden that many people are pushing, and some of them, like for example, the President of the Council on Foreign Relations, Richard Haas, a very influential think tank. They are pushing for Biden. So what does that mean? Well, we know that during the previous, what we called status quo administrations of George W. Bush and Obama, they are talking about the same wars that Trump wanted to stop, and the result of those wars, hundreds of thousands of lives lost, millions of refugees, trillions of dollars wasted, and is it in America’s and the world’s best interest?

And there’s another way, and I think this is what the theme of this conference is, and here, I want to quote another professor from Brown University: His name is Samuel Zipp. He wrote an article, in Foreign Policy magazine. It’s titled “The Postwar Global Order That Never Was.” He reminds us that it was FDR and former Republican Party leader Wendell Willkie’s idea to reorganize this world political and financial system with the efforts of U.S.A., U.S.S.R. and China. This was back, we’re talking about 1944-45. Unfortunately, we know that FDR didn’t live long enough to implement these ideas. But now what we see is that communist U.S.S.R. was replaced by capitalist Russia, so I think this makes this job now much easier to do.

And so, to conclude, we see the upcoming 75th UN General Assembly session, and this idea—I think it was first suggested by President Putin—to have this meeting of the major powers, nuclear powers, the permanent members of the UN Security Council—or at least, maybe, we can start with three members, like U.S. and Russia and China, and maybe then expand it to a kind of G5—and talk about the same ideas that FDR and Willkie were discussing. And maybe this is something that would be very beneficial, contrary to what a Biden presidency would do. Trump can take the credit for that, because he will save the world from a nuclear holocaust.

Of course, I can’t speak for China; it’s not really my area of expertise, but I can assure you that Russia is really ready for a serious conversation—actually, it was Putin’s idea.

But I just mention very briefly my experience, because during the Gorbachev and Yeltsin days, we used what we called “people’s diplomacy,” and I personally was carrying messages from Gorbachev and Yeltsin directly to President George Bush and Vice President Quayle, during all four years of their term in the White House. This was done with the help of Paul Weyrich. For those who don’t know, he was a founder of Heritage Foundation. Weyrich was very influential. He had direct access to both Bush and Quayle. And I would pass messages to Paul, and Paul would pass messages to Bush. And both Gorbachev and Yeltsin practically were begging, not just for partnership with United States, they were talking about strategic partnership and even alliance. Even under Gorbachev, under Soviet Union, communist Soviet Union, wanted to be America’s ally—can you believe it? But Yeltsin, already it was Russia, non-communist, had the same.

The Bush-Obama Years Led to the Brink

Now, I didn’t carry any message for Putin, but I didn’t have to, because Putin himself told this to Bush, that he wanted Russia to be American ally, and he proved it, not just with words, but with deeds. We know that in the year 2000, Russia under Putin did more for American operations in Afghanistan than all other NATO members combined. And I remember, because every year until recently, we had an event on Capitol Hill called “World Russia Forum,” and every member of Congress—we had Senators and Members of Congress who were praising Putin, saying, finally, we have our man. So, when we’re talking about a strategic partnership, alliance, of course, it’s great. And this was our dream that Russia, non-communist Russia and United States, allies.

Now, George W. Bush was not very grateful for this help and what was his response? His response was that he abrogated the ABM Treaty, invaded Iraq; he promoted color revolutions on post-Soviet space; and most terrible mistake, NATO expansion, it was virtually following Bill Clinton, who did the same. But, Bush added Ukraine and Georgia as a goal to be involved into NATO. And this was a red line that Moscow could not allow to be crossed.

Now, with Obama, we had continuous NATO expansion, Libya devastation, and, which is terrible for Russia, it was United States under Obama which backed the coup in Ukraine.

So, as a result, we are here, on the brink of World War III, and this is not just my opinion: It is the opinion of really top Americans—this letter in Politico was signed by over one hundred experts, top experts. I already mentioned some names. You can easily find the article on the Politico website, and see all those hundred names.

What President Trump Can Do

But Trump has a chance. He has a chance, if he listens to the speeches at this conference, and he does what smart people, who are assembled here, advise. And he might get another four years, because I think the majority of American people are also not very happy that we are sleepwalking into nuclear catastrophe. So maybe they will forget about differences in some political stuff, and they probably want to make sure that we are safe, that the security of the United States is preserved. So he might get a chance to get a Nobel Peace Prize, win elections, and most importantly he will save America and mankind from Armageddon. 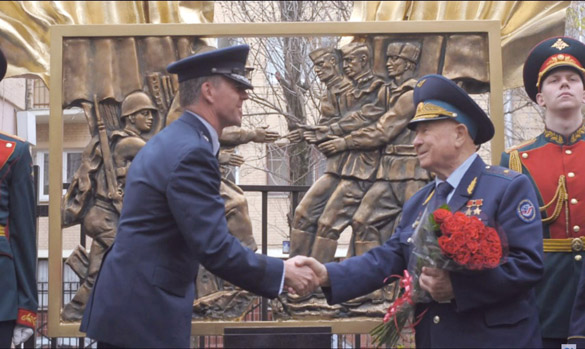 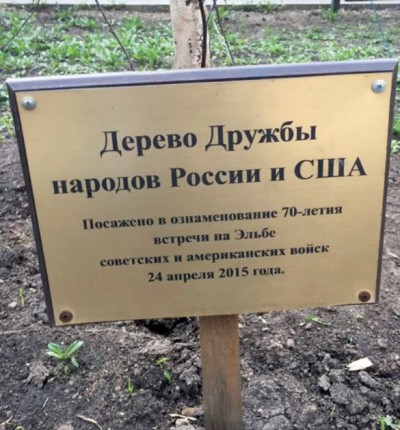 Mr. Lozansky closed his prepared video with a set of slides to show how “Russia really likes America,” including statues of famous Americans in downtown Moscow. He described:

• The Elbe River memorial, where Soviet and American troops met on April 25, 1945, in the city of Torgau. The American military attaché, Gen. Bruce McClintock, is on the left, and on the right is the Russian cosmonaut, Alexey Leonov, who flew on the Soyuz-Apollo famous space flight.

• The Friendship Tree planted by the U.S. Embassy officials and Russian activists next to the Elbe River memorial. The translation [of the sign] is “Friendship Tree of Peoples of Russia and United States.”

• The American poet Walt Whitman on the campus of Moscow State University.

• The statue of President Lincoln next to Russian Tsar Alexander II, next to this Elbe River memorial. “The Lincoln statue in Moscow is safe. It’s safe in the downtown, and people come and they put flowers, and Lincoln is very respected in Moscow.”

• The statue of Ronald Reagan and Gorbachev, showing Susan Massie, the famous American writer, unveiling the sculpture, and the sculptor, Aleksandr Burganov.

I am finishing my short presentation with those symbols that Russia people really want to be not, as they say, being friends with America; they want to be partners, they want to be allies, but it’s now up to America. And I hope that it will be President Trump who will somehow implement our hopes. 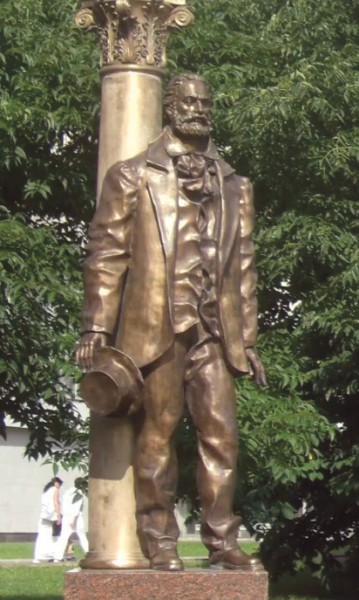 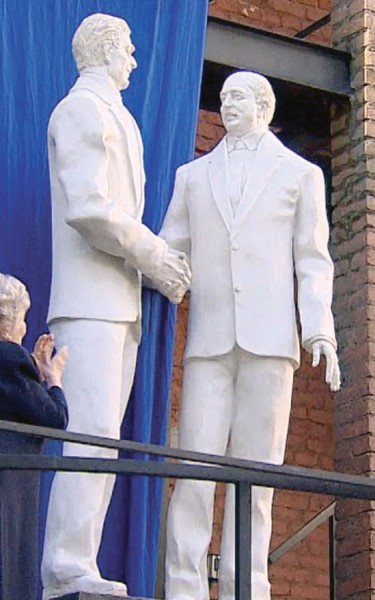 Courtesy of Dr. Edward Lozansky
Statue of Presidents Reagan and Gorbachev in Moscow. 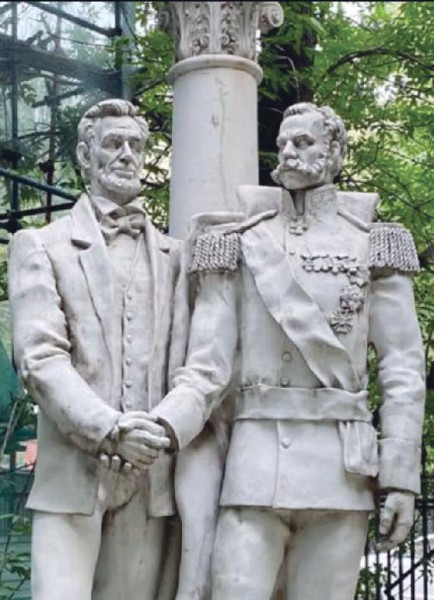 Courtesy of Dr. Edward Lozansky
Statue of Lincoln and Alexander II in Moscow.