Achieving Fusion Power:Where We’ve Been, and How We’ll Get There

This is the edited transcription of a pre-recorded interview of Mr. Dean, presented as his opening remarks to the Schiller Institute conference on September 5. Mr. Dean is the President of Fusion Power Associates. 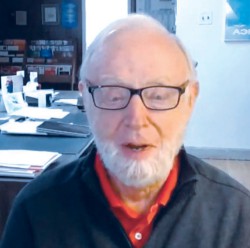 Q1: Could you describe the history of the U.S. fusion program and its achievements?

In the 1970s, tokamaks were invented and demonstrated first in Moscow at the Kurchatov Institute. It was so attractive that the whole world started building them in various sizes. Progress was very rapid, and the U.S. built a facility at Princeton called the Tokamak Fusion Test Reactor, and Europe built a facility called JET [Joint European Torus] that is still in operation. Both of these achieved fusion conditions. So, the world was ready to move ahead very rapidly in the 1970s from these achievements.

The U.S. Congress actually passed the Magnetic Fusion Engineering Act of 1980, saying that the U.S. was ready to spend $20 billion in order to have a fusion power plant on the grid by the year 2000. So, we were ready to go and do that. We were planning to build a facility like the present-day ITER [International Thermonuclear Experimental Reactor] in the 1980s.

But Congress never provided the money to implement that Act that was passed by Congress. So, things slowed down, and in 1985, Reagan and Gorbachev got together and said they would build it as an international project, and all the rest of the world then joined in on that. That became the ITER venture that’s now coming to fruition soon. ITER has been a prime example of how successfully the world can work together to do something like this. Of course, as you know, it’s being built in France right now. [See the presentation to the Schiller Institute conference by the Director-General of ITER, Dr. Bernard Bigot, also in this issue.]

Q2: What have been the consequences of the cuts to the U.S. fusion budget over the decades?

The real momentum for fusion and the really big facilities for fusion are all being looked at elsewhere. For example, in Japan, a huge, new fusion experiment called JT-60 Superconducting just came in operation this year. Its construction is just being finished. In Europe and the UK, the JET experiment is still running, where the U.S. Tokamak Fusion Test Reactor got shut down. So, we’re totally dependent right now on the international effort for what the timescale of bringing fusion online for electricity is. The U.S. does not have a commitment right now to actually build anything like a power plant or a prototype power plant, although we have a study going on right now by the National Academies looking at what’s called a pilot plan as a goal. But it’s a goal, it’s an idea, but it’s not yet agreed to by the government that the U.S. is actually going to do it.

So, you have to look at our budget as just being our budget; just a small contribution, maybe less than 20% contribution to what is really a world effort. In all the countries of the world, the scientists are working very closely together. If it’s China, or Japan, or India, or Europe, all of them know the same thing. All of them are ready, depending on their government policies, to step forth.

In China, for example, the size of the program has been expanding rapidly. The number of people working on fusion now in China exceeds the number working here, and the same way in Europe. So, we’re just a small part of the world effort, and it’s really the world effort now that you have to look at, and the world facilities that are being built, to judge how fast we are moving.

Q3: Is it important to have a robust domestic fusion program in addition to the international level?

Well, you can’t have a successful international program unless all the parties have a robust national program, because they all have to have enough smarts and capabilities to contribute their weight to the international venture. And they all have to be prepared to capitalize on the successes of the international project to move their own programs forward. It’s important that each country has a plan of its own, how to step forward beyond ITER to the power plant, because the energy markets, the electricity markets in each country operate very differently. So, it’s important for every country to decide what they’re going to do beyond ITER that best prepares them to make fusion a success in their market.

Q4: Could you give us a sense of the scope of the work being done in fusion around the world today?

One of the interesting things I think that’s happened in the last several years is the emergence of a bunch of small companies that are being funded mostly by private money. I think that’s happening because ITER is making people feel that fusion is real, and ITER is making people think, well, maybe there’s a way to do it faster or cheaper than what it’s costing ITER, because we’re all smarter now. So, we have now the phenomenon really of more than a dozen of these small companies around the world. Most of them, I think, are in the U.S., but they’re [also] in Europe and the UK.

Also, small companies that are getting sizable amounts of money and have very ambitious plans. Some of them—for example, Tokamak Energy in the UK, a private sector company. It’s a variation on the tokamak, it’s not the conventional tokamak, but it’s a smaller, improved tokamak called a spherical tokomak. I visited there in March, and they’ve already built an experiment, and they’ve already got plans to go beyond. And the Culham lab in the UK also has an experiment of that type, and they’re all working together. Princeton is actually bringing into operation in a couple of years a bigger tokamak of that type, the spherical torus. That’s in competition with the conventional tokamak, and right now the leader in that area for getting to power is Tokamak Energy in the UK.

There are other companies that are following concepts that are not tokamaks at all, like TAE Technologies in the U.S. TAE is using a variation of a concept called the mirror concept, or the field-reversed concept. They’ve built two generations of machines, and they have good funding. They’ve got plans to bring online a demonstration power plant in the next 10-15 years that would not look like a tokamak at all. It’s behind the tokamak scientifically, and it’s behind the tokamak in achievement so far, but it’s moving fast, and it’s being built on a physics basis that’s been around for quite some time.

I was going to mention that the tokamak and these other concepts are based on tokamak-like physics, or mirror physics, mirror-confinement physics.

There’s a whole other approach to fusion called inertial confinement, which is based mostly on lasers. There’s a little company in Germany called Marvel Energy which is looking at ways to capitalize on developments, breakthroughs, in laser technology to try to move that whole area along faster. That’s based on some of the work that’s going on at Lawrence Livermore [in California] on the biggest laser in the world called the National Ignition Facility. There are programs in the U.S. that support that in Rochester and the Naval Research Lab, but there’s this little company in Germany at Garching called Marvel Fusion that wants to take all of that and move the whole thing faster with these petawatt lasers which aren’t being used in the conventional inertial confinement.

So, there’s a lot of innovation going on, there’s a lot of progress in all of the different areas. As I say, there’s a dozen little companies. There’s even a company in the U.S. called Zap Energy which is going back to one of the very original concepts that people tried in the 1950s on fusion called the Pinch. It basically looks like a fluorescent light, but instead of a few amps of current down the tube, it puts a million amps of current down the tube. These were always unstable when you tried to do that, but they’ve got the idea that if you just put a little twist on the pinch as you make it, it won’t go unstable, or at least it won’t go unstable very fast. And maybe you can get enough fusion out of that.

That’s an extremely simple idea, but if it works, and you can keep it stable for a long enough time with that geometry, it’s extremely simple. One of the things electric utilities are looking for are technologies that aren’t so complicated that they’ve never used before, that they’ve got to figure out how to make them work on a very reliable basis to make electricity for months and years on end without having to do a lot of maintenance.

Q5: If we did have full funding and support of the U.S. domestic program, how might that affect the timeline for achieving fusion?

Well, in the United States, it would affect it tremendously, because if the money starts to come in, in the quantities we envisioned, escalated to today’s dollars, what that would mean would be that the Congress and the U.S. government are committed to building the facilities necessary to do this quickly. So, building the facilities that you need, and building them quickly, and having the money to do that makes a total difference in the schedule. I still have no doubt that if we got that money, we could be doing this in 15-20 years.

There’s also a management issue. Right now in the U.S., the fusion program is being funded as a science program. That’s like when we decided to go to the Moon, astrophysics was a science program. But you had to build up a whole infrastructure and management commitment to go to the Moon. So, what we’d have to get in addition to the money, would be a management structure that was committed to getting to a power plant. That is not in the psychology right now of the fusion management at the Department of Energy. Along with the money, you would either have to have a whole new agency, or you would have to have the Department of Energy set up a whole new wing to make a firm commitment to manage this thing through to the end.