This is the edited transcription of Mr. Paluszek’s presentation to the Schiller Institute conference on September 5. He is the President of Princeton Satellite Systems. 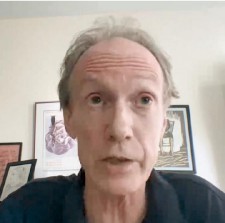 Direct Fusion Drive (DFD) is a nuclear fusion rocket engine for deep space operations. DFD does not produce enough thrust to take off from a planet or moon. In this talk we present a transfer vehicle that uses a high-thrust nuclear thermal engine to depart the Earth, then, using DFD, leave Earth orbit and go into orbit around Mars. We’re going to talk about two types of nuclear reactions: fission, which is splitting atoms, and fusion, which is combining atoms

Direct Fusion Drive is a new type of rocket engine, made of a fusion reactor powering a plasma rocket. It’s different from many other nuclear fusion technologies, because this single fusion engine can generate both propulsion and electricity to power its payload.

Here’s how it works:

The DFD engine is made of a linear array of coaxial magnets with a pair of smaller, but stronger mirror magnets at the ends. A fusion region is centered within the magnet array, while cool plasma flows around it to extract energy. This fusion region is about the length of a surfboard and holds very hot plasma that spins like a motor. Antennas surrounding the engine create a novel radiofrequency heating mechanism, which is tuned to particular fuel ions and creates a current in the plasma. The plasma ions get pumped up with increasing energy cycles until the ions become hot enough to fuse.

Once the ions fuse, they create new, very energetic particles called fusion products. These particles follow paths that take them in and out of the cool plasma layer as they orbit the magnetic field lines. With each pass, the fusion products lose energy, until they get captured by the open field lines, and shoot out the back of the engine. This takes just a few milliseconds.

The mirror magnet at the end of the engine converts this electron thermal energy into ion kinetic energy, creating thrust, just like a regular rocket nozzle. Extra heat from the fusion reaction is converted into electricity, providing power for scientific instruments and communications.

The fuels or reactants used are deuterium and helium-3. The main reaction, therefore, is deuterium plus helium-3, which produces helium-4, the kind of helium used in helium balloons, plus a proton. Most of the power is in this reaction. We also get side reactions, which produce tritium and neutrons. Neutrons damage the walls, but we fortunately don’t have that many of them. 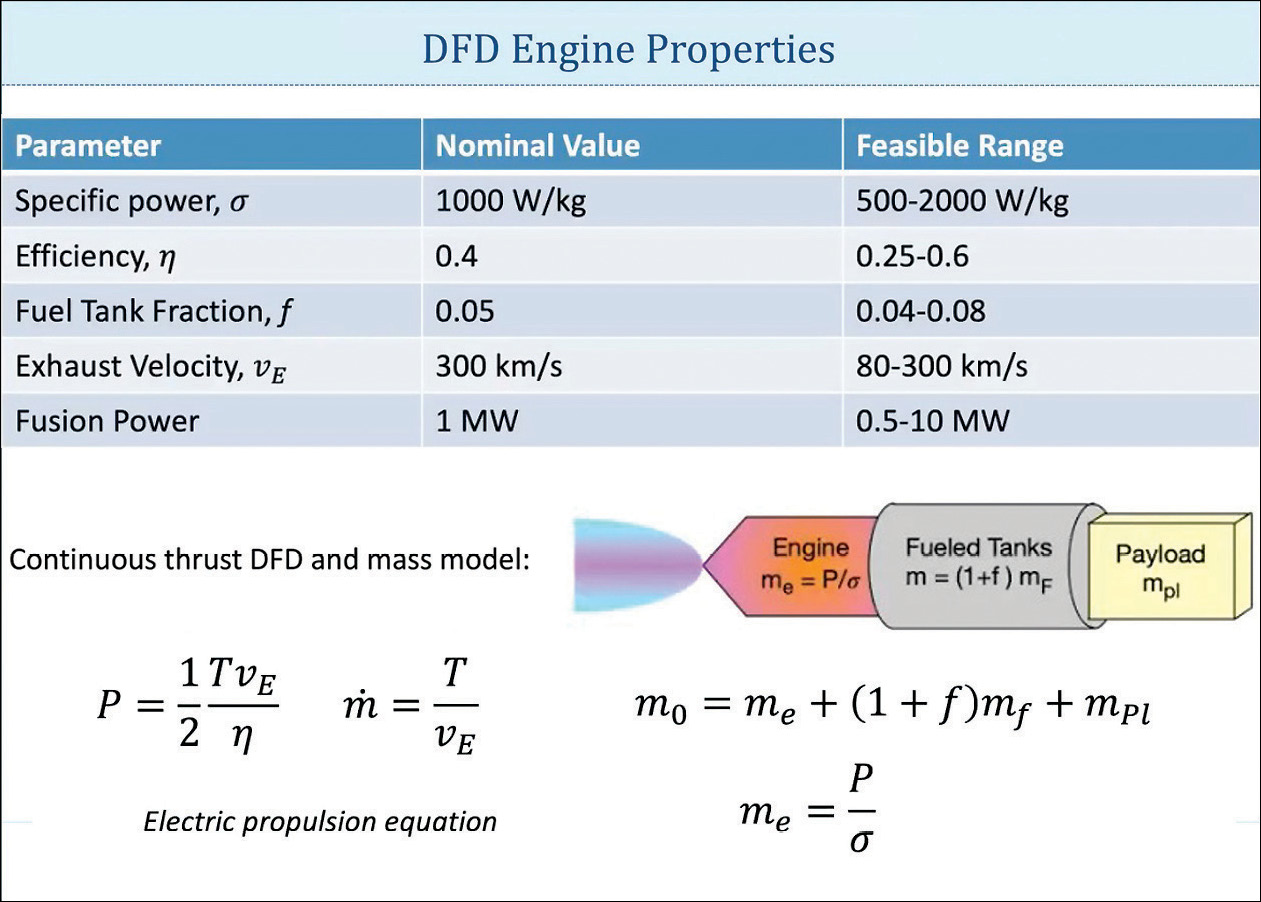 Figure 1 shows the properties of a Direct Fusion Drive Engine.

The Specific Power is a very important parameter, because it shows you how much power we get per unit mass, and that’s going to determine how good an engine it is. The Efficiency is how much power goes from the fusion reaction into the thrust. The Fuel Tank Fraction is particularly important because it ultimately limits how much ΔV you can get with a given engine, with a given Exhaust Velocity. You’ll notice the Exhaust Velocity is very high, at 300 km per second. A typical hydrogen-oxygen engine, like that used on a rocket like the Space Shuttle, has about 4.5 km per second; a Hall-Effect thruster has 20 km per second. The Fusion Power from a typical engine is 1 megawatt (MW). 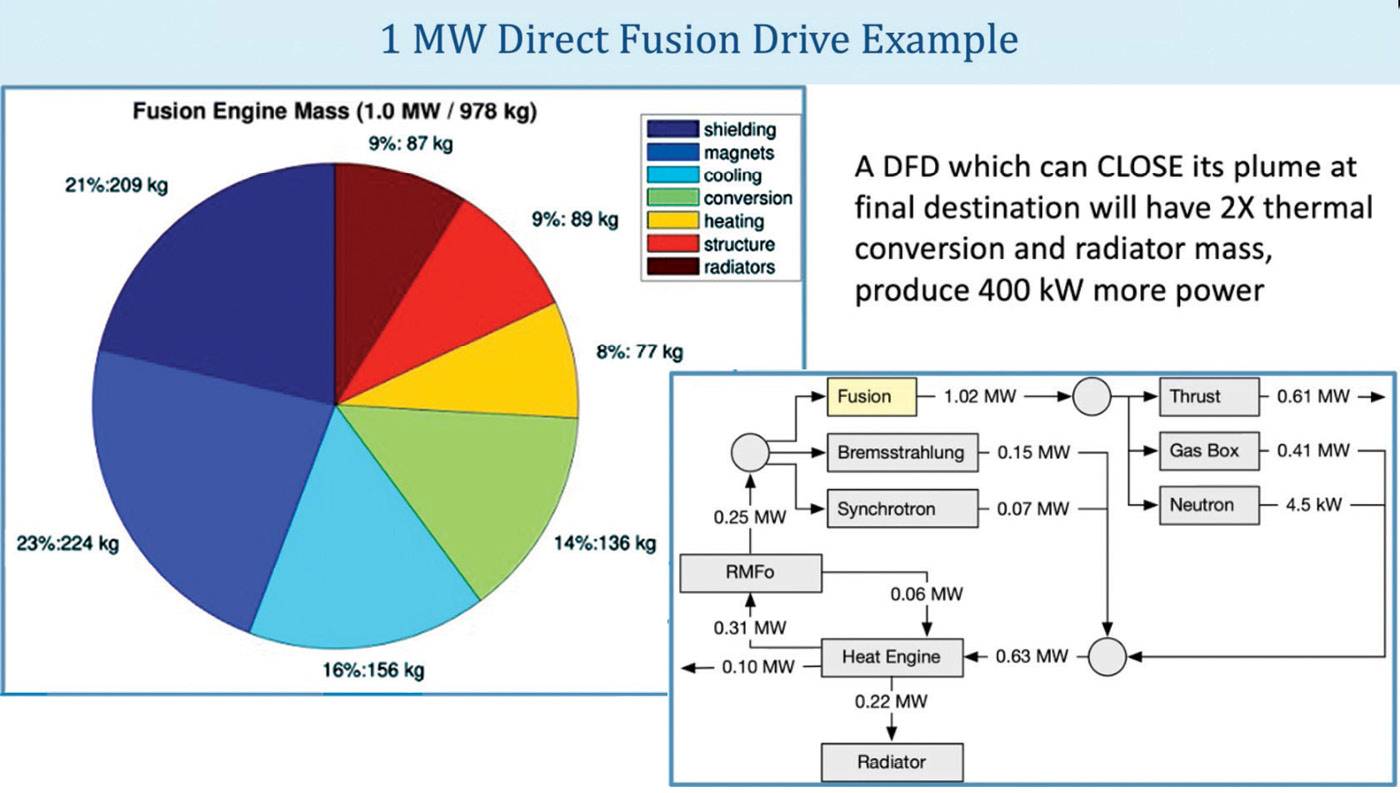 Figure 2 shows you the breakdown of the mass for the engine in all its components. To the right is a flow diagram of where the energy is going. The Rotating Magnetic Field (RMF0) and Radio Frequency Drive drives the fusion reaction but also waste energy and Bremsstrahlung, which is X-rays, and Synchrotron Radiation. All this is fed back into the engine, and some is lost as waste heat to the radiator.

Space Travel Is Faster with DFD

Now, a fusion engine can get you places a lot faster. We can get to Jupiter in one year, Saturn in two, and Pluto in five. The NASA New Horizon mission took about nine years to get to Pluto, and it couldn’t go into orbit. With DFD we could go into orbit, which enables all sorts of new science.

We depart the Earth and then leave Earth orbit for Mars a short time later. We then wait almost a year on Mars, on the surface, doing experiments, and setting up new technology and new habitation for future travelers, and then we return to Earth. The whole mission takes very little time, much less than it would if we used a Hohmann transfer orbit, which is what you would do with chemical propulsion. 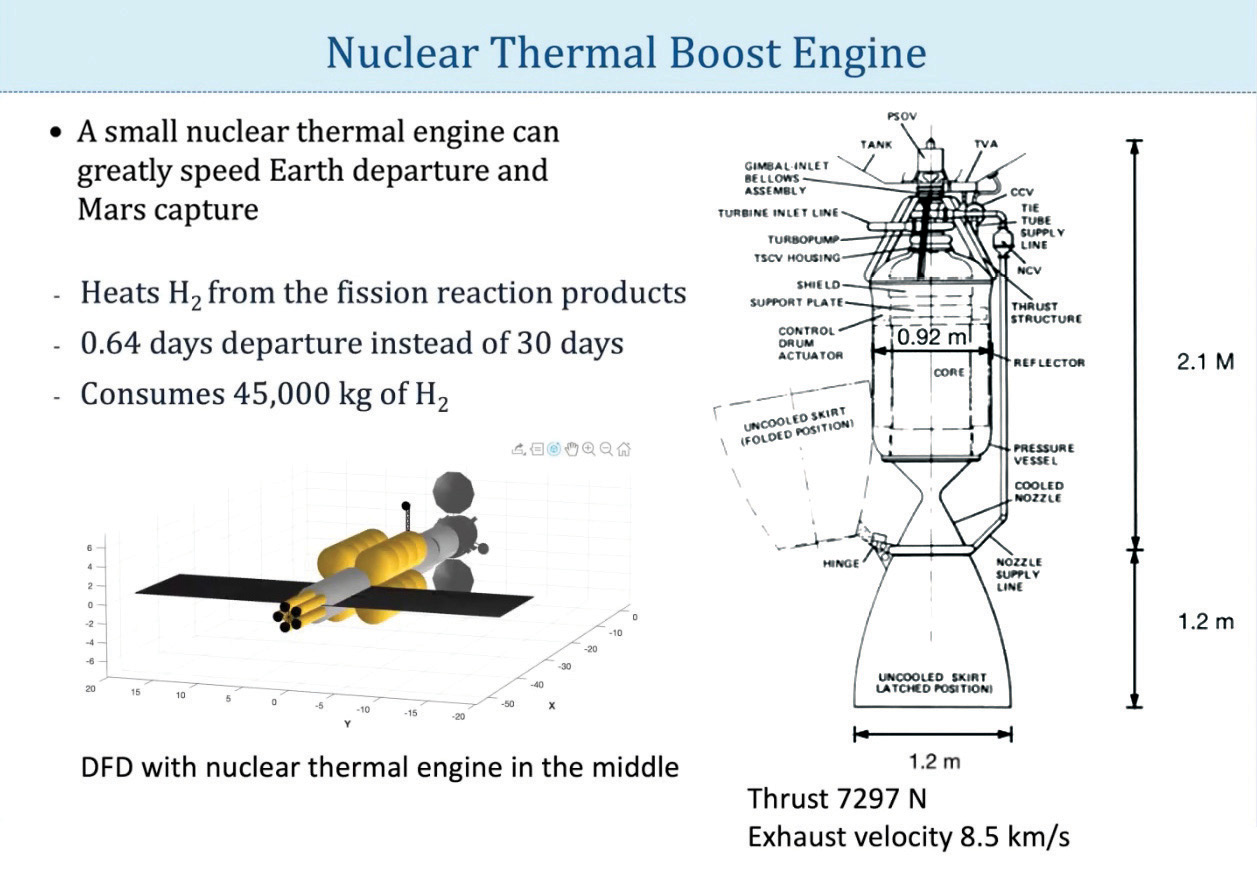 We depart from Earth orbit in a spiral and it could take up to 30 days. So, one idea is to use a nuclear thermal engine, which produces ten times the thrust to get us out of Earth orbit. So instead of taking 30 days, it’s only slightly more than a half-day. On the other hand, because the exhaust velocity is much lower, we consume a lot of hydrogen. Figure 3 shows a nuclear thermal engine developed by NASA. Its thrust is 7,297 newtons, which is quite a lot. The exhaust velocity, however, is only 8.5 km per second, about twice that of the hydrogen-oxygen engine that I mentioned a moment ago.

So here’s the idea of the Mars mission: We can get there in 100 days, which is a lot better than the six months a chemical rocket would take. And you can see, we could deliver 30 metric tons, that’s about 30 tons, and we show some of the parameters we use in our analysis. Now, we haven’t built the engine, so these are hypothetical and based on analysis. But you can see our thrust is much less than that of the nuclear thermal stage.

Besides propelling us to and from Mars, we can also use Direct Fusion Drive as a surface power source, because it is also being developed for power generation. You can use this engine to power bases, delivering a megawatt for scientific experiments, manufacturing, mining, and industry, on the Moon or on Mars.