This article appears in the September 18, 2020 issue of Executive Intelligence Review.

An Approach to the RelationshipBetween Science and Politics

These are the prepared opening remarks by Dr. Pulinets for his live presentation to the Schiller Institute conference on September 5. Dr. Pulinets is a Principal Research Scientist at the Space Research Institute of the Russian Academy of Sciences. 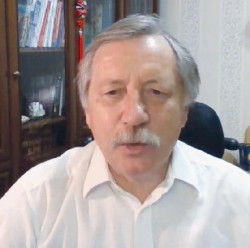 It is a great honor for me to participate in such a representative forum, which actually discusses the fate of our civilization, which is currently exposed to real dangers that could lead to the destruction of human civilization as such.

As a professional space scientist, I would like to start with the cosmic factors affecting our planet. Particular attention should be paid to our luminary, [the Sun,] whose behavior has baffled many scientists. Its activity during the last solar cycle turned out to be unexpectedly low; in fact, we had the opportunity to observe the weakest solar activity cycle since the beginning of instrumental observations of the Sun. If in the maximum of the previous cycles there were 150-200 sunspots, which characterize the activity of the Sun, then in the current 24th cycle the number of sunspots at the maximum has barely exceeded 95.

Usually, long periods of decreased solar activity are associated with cooling on our planet, as it was during the Maunder Minimum, which lasted from about 1645 to 1715. Since November 2019, when, after a long hiatus, the first spots appeared on the Sun, a new, 25th cycle has begun, and, apparently, 2020 will show how the situation will develop. Will the Sun return to normal, or should we wait for a cooling, despite all the forecasts and the actually observed global warming?

While we are observing a gradual increase in solar and geomagnetic activity, the Sun continues to amaze us. We are, starting from August 17, in a state of continuous magnetic storm for the third week. It is small, but of such duration I have never seen it in my entire rather long scientific career. Therefore, we need to increase activity in solar research. In this regard, I would like to welcome the initiative of NASA to start developing a new solar project, HelioSwarm.

I know that many are inspired by astrophysics, problems of the origin of the Universe, interplanetary flights, the exploration of the Moon and the planets of the solar system, but it seems to me that in planning space research, one should first of all take care of our planet, because now the question is literally about the survival of mankind.

What are the most relevant areas I would like to highlight?

Recently, there has been a dangerous tendency when countries ignore agreements on the peaceful use of outer space and begin to organize a space command, space weapons and systems for their use. This critically lowers the threshold of a new world war, which with the available technologies can very quickly end with the destruction of our civilization. Therefore, not only politicians, but all of humanity, including the participants of this forum, should make every effort to prevent the development of a situation that would actually allow placing weapons in space.

2. The problem of climate change and space research

We observe an ever-increasing number of global cataclysms; fires and floods alternate without interruption, and we see that humanity is not coping with this problem. And part of this problem is the inability of science to explain and predict these phenomena. Despite the increasing number of remote sensing devices, a person remains just an observer, only with the best equipment, since the paradigm of modern science, based on narrow specialization, turns certain groups of scientists into blind people, feeling the elephant from different angles. The problem of interaction between geospheres, which Academicians Vernadsky and Laverov spoke about, remains on the sidelines, far from mainstream research. And while this situation continues, we will again shrug our shoulders after the next cataclysm, passively observing the melting of ice and permafrost.

3. The problem of earthquake prediction

I would like to dwell separately on the problem that worries me personally. We are talking about the problem of earthquake prediction. We have developed a technology that makes it possible to carry out a short-term forecast (for several days) of destructive earthquakes. A physical model of the formation of precursors was developed, a number of monographs and hundreds of articles were published, papers were reported at all possible international conferences of the highest level, patents were obtained in the USA and Russia, negotiations were held with the Ministry of Emergencies in Russia, FEMA in the USA, and in Japan.

The results have been practically demonstrated using data from various spacecraft on a global scale, but it seems that solving this problem is not beneficial to those in power. All our efforts go like water into sand, and people continue to die, buildings collapse, and then the ministries of emergency situations begin to heroically pull the remains out from under the rubble. And in this case, we can say that this is not a problem of science, but the relationship between science and politics.

Recently, the number of phantom phenomena has multiplied in the world, among which the so-called green energy can be attributed. Everyone is shown pictures of clean cities in which electric cars drive. Let’s turn to the numbers. According to a report by the International Energy Agency (IEA), even if the share of electric vehicles in the world grows 15 times from the current number, it will reduce global CO2 emissions by only 1%.

In turn, IEA Executive Director Fatih Birol said that electric vehicles saved 40 million tons of CO2 worldwide in 2018, equivalent to a decrease in global temperatures of just 0.000018° C—or just over a hundred-thousandth of a degree Celsius—by the end of the century.

But does the use of electric vehicles actually reduce CO2? Let’s think about where the electricity comes from to charge the batteries of electric vehicles. Electricity is produced by power plants, most of which are thermal, i.e., they burn oil products, producing an enormous amount of carbon dioxide. If we take into account that the efficiency of this entire chain of bringing energy to a car battery is much less than unity [less than 100%], then when this energy is produced, much more carbon dioxide is released into the atmosphere than if this car simply used an internal combustion engine.

But that’s not all. In the production of batteries, metals such as lithium and cobalt are used, which are not so abundant on our planet and are found only in some countries. For example, in Chile, “lithium mining uses almost 65% of the water resources of the Salar de Atacama region, one of the driest desert regions in the world, to pump out brines from drilled wells.” UN experts note that one ton of lithium requires a million liters water. This “contributed to environmental degradation, landscape disruption, soil pollution, depletion and contamination of groundwater,” the UN report says.

Along with lithium, cobalt is another key component in electric vehicle batteries, and two-thirds of all cobalt is mined in the Democratic Republic of Congo (D.R.C.), the UN said. The United Nations Children’s Fund (UNICEF) reports that about 20% of the cobalt supplied from the D.R.C. comes from artisanal mines “where human rights are continually abused, and 40,000 children are employed in extremely hazardous conditions for meager wages.”

But that’s not all. You all know that the batteries that you use in your gadgets cannot be disposed of with ordinary waste, but must be taken to special recycling centers. There are billions of these small batteries. At the same time, UNCTAD experts estimate that over the next decade, sales of electric vehicles will grow to 23 million units, thus, in just four years, the battery market is expected to grow by more than 700% to $58 billion by 2024 from the current level of $7 billion. And batteries don’t last forever.

Now imagine the industry for recycling these batteries. How much energy is required for their utilization. And how much carbon dioxide will be released at the same time. Electric cars are a mirage for ordinary people and lovers of beautiful pictures. Most likely, it is necessary to direct efforts to the production of hydrogen-fueled cars, which exist, but for some reason are not produced on a mass scale.

People have told me that electric cars are not all there is to green energy. There are also wind generators and solar panels. I will not go into details here. I will say that both sources depend on external weather conditions not controlled by humans. No one can guarantee you that the weather will not be calm for a long period of time or that a dust storm will not cover the working cells of solar panels with sand. You need a reliable supply, not the California crisis that led to blackouts this year due to extreme heat and fires. Even such simple things, such as that the maximum solar electricity is generated during the day, but because most people come home from work in the evening, there is a surge in consumption, the system cannot cope.

There are plenty of other arguments, but let’s move on to the conclusions. No one disputes that green energy helps preserve the environment, but it does not provide the main conditions: reliability, safety and continuity of production. It can be used in small farms, on farms, in remote places where it is not profitable to extend power lines. But it cannot and should not be used to supply power to hospitals, schools, critical infrastructure, military units.

According to the Schiller Institute conference program, it is clear that at this conference a lot of attention will be paid to thermonuclear energy. There was enthusiasm with the start of the construction of the ITER reactor in France, but this is still only a prospect for at least a decade. If we want to solve the problem now, then the only possible way out, I think, is the massive construction of reactors based on fast neutrons. They are already there, they are safe, and they leave no nuclear waste. They will solve many problems, including in countries with undeveloped economies. They can be used to operate desalination plants in regions with a lack of fresh water, and most importantly, the stability and uninterrupted supply of electricity.

Dear Sirs, our conference is taking place at a time when humanity is passing a turning point in its development, when the level of turbulence has reached a critical point in almost all countries. And the main thing in such circumstances is making correct and balanced decisions. It is not enough merely to accept them; they still need to be conveyed to people, and one of the main tasks is to convey this information to as many inhabitants of our planet as possible, because only then they can be implemented. Let me wish us all the best in achieving this noble goal.

Watch the videos and sign the Petition to Exonerate LaRouche