The ITER Project:Hydrogen Fusion for the World Energy Supply

This is the edited transcription of the pre-recorded video which served as Dr. Bernard Bigot’s opening presentation to the Schiller Institute’s conference on September 5. Dr. Bigot is the Director-General of the International Thermonuclear Experimental Reactor (ITER). Subheads have been added.

Thank you very much for inviting me to participate in this International Schiller Institute conference. I’m very pleased to introduce you to the ITER project. Its mission is to demonstrate that hydrogen fusion could be an option for the world energy supply in the future.

The ITER site has the various buildings and equipment on their way to being erected and installed. This very large project is governed by 35 participating countries and seven primary partners.

Everybody knows that we are facing a limit for the use of fossil fuels which we have been using now for over 150 years. And the alternative options are limited. We have to rely on some well-known physical phenomena.

Clearly, there are renewable energies, which are quite attractive, but from my point of view, it is a partial solution, because of low power density, coupled with intermittent availability for large population concentrations. The mega cities require massive energy production, which has to be predictable. Nuclear fission is also an option, certainly. But as you know there are drawbacks and limitations, because uranium resources are not infinite.

We need to find another solution, another option. We can look at what is happening in the universe. In the universe, the most common way to produce energy is hydrogen fusion as in the Sun and in the stars. The Sun is just a big bubble of hydrogen, 300,000 times the weight of the Earth. And at the center of the Sun, there is a very hot plasma of 15 million degrees (Celsius), a high-density plasma, and the hydrogen fuses and produces energy.

How to does that happen? The compression of the hydrogen nuclei brings them closer and closer, and at a short enough distance, they fuse and produce two new particles: neutrons and helium. They move away and release a lot of energy. 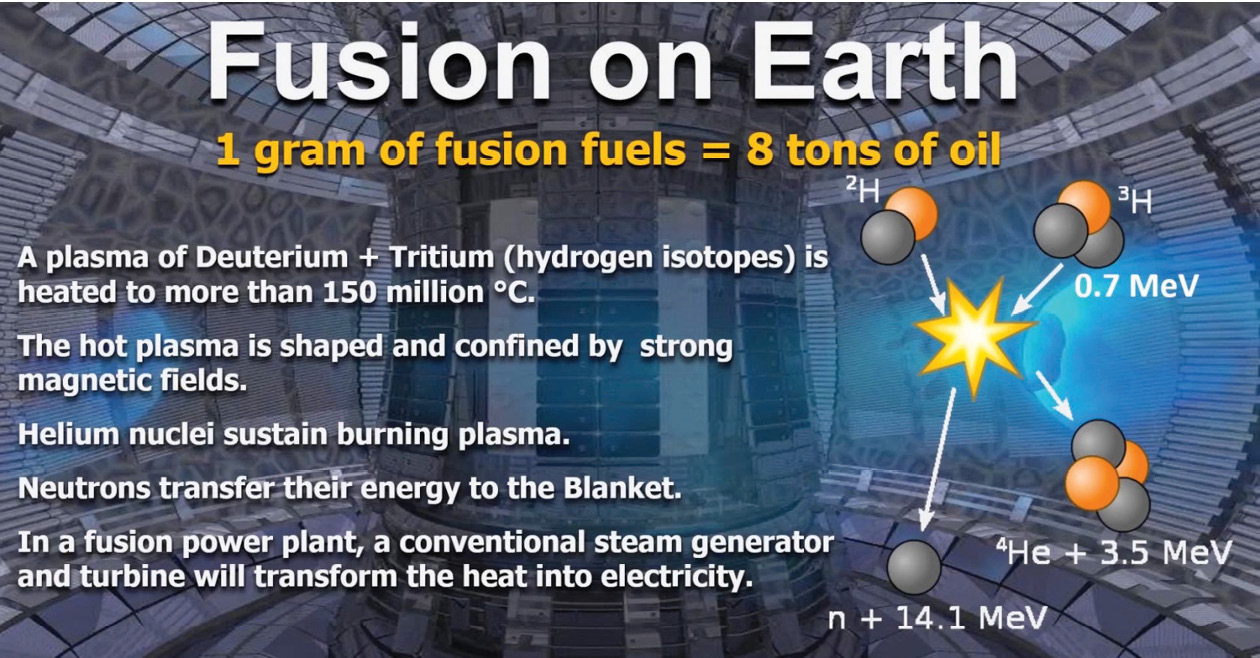 On Earth, we cannot produce that energy in the same way, as you can imagine. Our physicists have been bright enough to imagine an alternative option, which is to use a very low density plasma, but at higher temperature, 150 million degrees, ten times the temperature of the core of the Sun. In that condition, we have been able to accelerate the hydrogen nuclei in such a way that they get up to a very high speed, and once they collide they fuse with high probability and in this way produce two new particles: the same helium nuclei as well as the neutrons.

The energy of the helium that you get out of this collision is an energy which is in the order of five times larger than the energy of the collision, and that of the neutrons, is 20 times. These two particles [neutrons and helium] will hit the wall and convert their kinetic energy to heat. This is the way we can produce energy with hydrogen fusion. The good point is that there is a very high density of energy in this phenomenon, since 1 gram of fusion fuel is the equivalent of 8 tons of oil.

There is a very large advantage in this technology, because:

• It can be a source of massive, predictable and potentially continuous energy, even variable in form, that complements renewable energies.

• It is safe, using only two grams of hydrogen at a given time. If any parameter deviates from the “normal” values, the reaction just stops.

• It is also environmentally responsible, because it only produces helium, which is a very inert chemical, as well as not radioactive.

• There is an almost limitless supply of fuel for hundreds of millions of years, widely distributed around the world.

• There is no impact on climate, since there is no greenhouse gas emission.

• Furthermore, fusion reactions produce no long-lasting high-activity radioactive matter, only a tiny amount coming from tritium and some activated parts of the walls of the reactor. 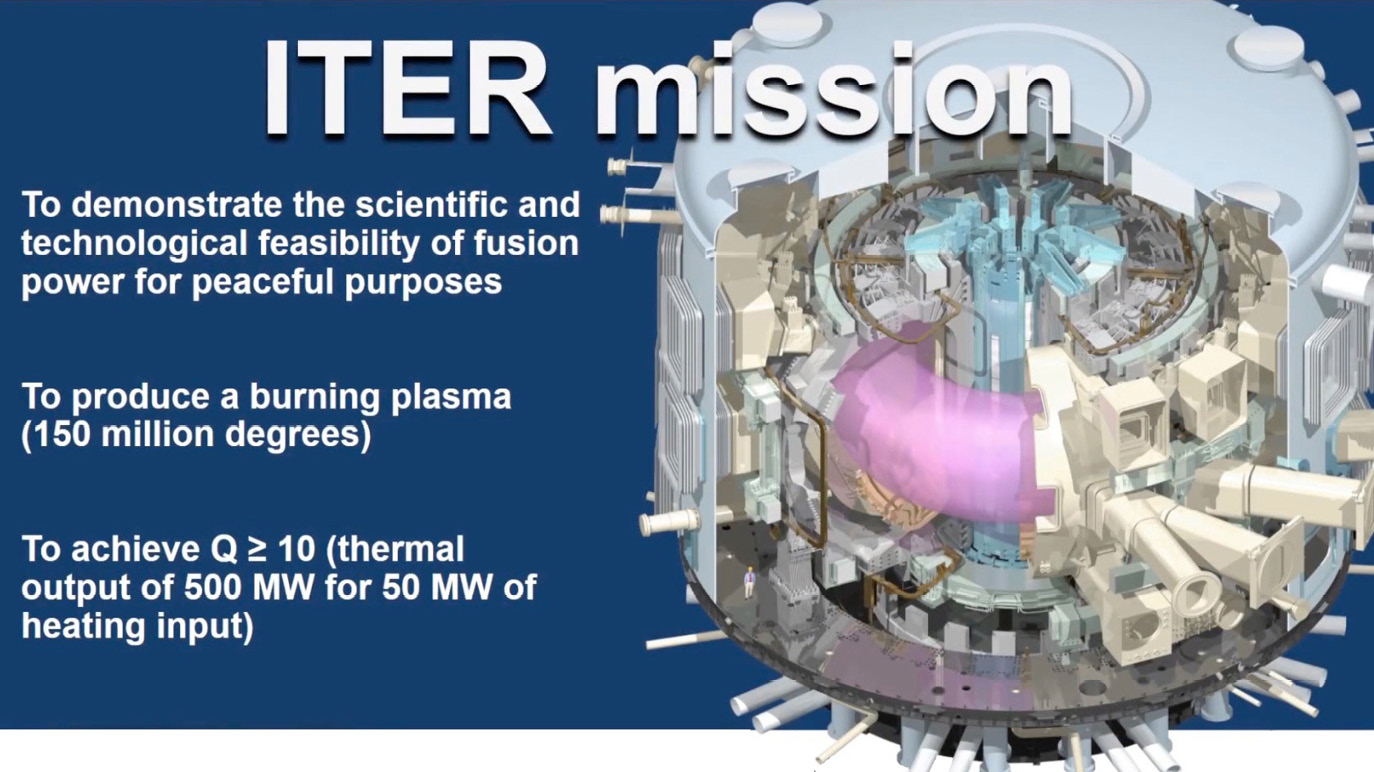 The ITER mission is quite simple:

• To demonstrate the scientific and technological feasibility of fusion power for peaceful purposes.

• To produce, for this, a burning plasma, as I mentioned, at 150 million degrees.

• To achieve a yield of over 10, when you compare the thermal output of the fusion reaction [500 MW] with the power that you have to inject into the plasma [50 MW].

The world record for hydrogen fusion is currently held by the JET [the Joint European Torus, in Culham, U.K.], with a plasma volume of 80 cubic meters. In ITER it will be ten times larger, at 830 cubic meters. The power being injected into the JET plasma, in the order of 23 MW, produces only 16 MW of fusion power, which is a net yield below 1, which is not so attractive. For ITER, the heating power is two times larger [50 MW] and indeed the fusion power generated [500 MW] is 30 times larger [than that for the JET]. So, definitely, size matters, which makes this option a little more complicated than some others.

How can we achieve this collision with 150 million degrees (Celsius) and a very high speed? 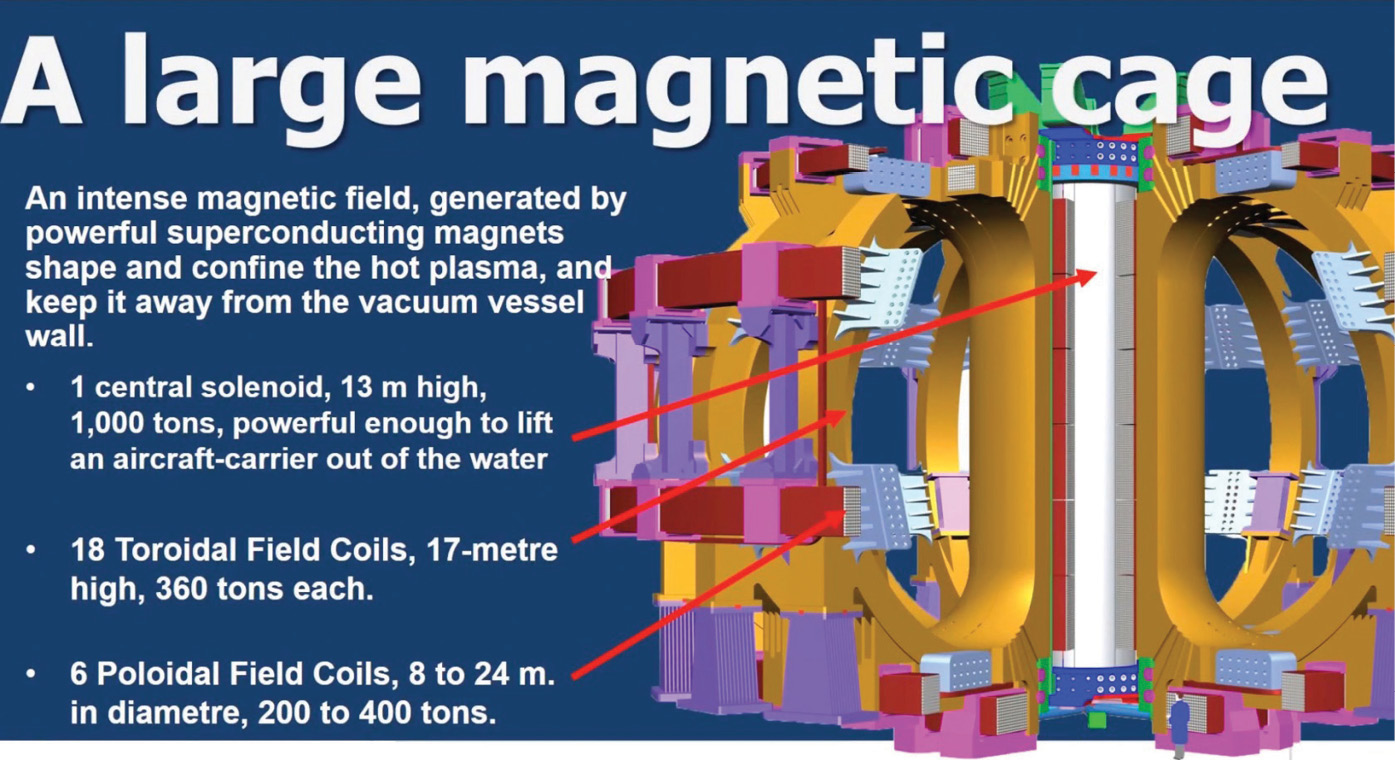 So this is why we have to assemble large magnetic cages. Figure 1 shows the size of these cages. With 18 vertical coils, 6 horizontal ones and the central solenoid, all of them nearly 20 meters wide and 20 meters high. We need a very high precision in order for the particles to circulate very efficiently on the circular magnetic field line. This is why we have to position the axis of the magnetic cages with a precision below a millimeter, compared with the axis of the vacuum vessel which we name the tokamak.

This is the reason for the size and the complexity of ITER, which has brought 35 countries to associate with seven major members. An initial agreement was reached on June 20, 2005 among the seven members to build ITER on the site proposed by Europe and the final ITER Agreement was signed in November 2006 in Paris. The seven major ITER members altogether, represent more than 50% of the world population and about 85% of global GDP.

Because all the members are really convinced that hydrogen fusion could be a breakthrough in the future for world energy supply, they have decided to produce “in kind,” the various components of the equipment. They are training the best of their industry to demonstrate the feasibility and capacity of the manufacturing of the large components such as the magnetic coils, the vacuum vessel and all the other equipment.

It is quite challenging to achieve the required qualities. That is why we needed long-term planning. In 2015, after a thorough review of the project, we decided to go on and create a schedule which should let us have the first plasma in 2025, after we receive in these precise years—2020, 2021, and 2022—all of the last components and have them assembled before the end of 2024. After that, after commissioning the equipment, we will produce our first plasma in 2025.

After that, we will have what we call a “staged approach” to full fusion power with our special brand of fuel, deuterium-tritium. We have planned a sequence for installing some complementary equipment to collect the energy; to heat the plasma more efficiently by adjusting the magnetic field; and to recycle the fuel that has been fusing in the tokamak.

The complexity of the management is related to the decision of this “in-kind” sharing of all the manufacturing of the components, and to the requirement that ITER members will share all intellectual property.

In the cutaway image of the tokamak, you can see the vacuum vessel, which is the torus, embedded in the magnetic cages, and all the different components that will be in what we call the “cryostat” because the temperature needs to be quite low for the superconductive coils: –270 degrees Celsius. In all of this work, big progress is now going on, with many manufactured components on their way:

• China has manufactured one of what we call the “poloidal field coils.” This coil is now complete and has been transported to the ITER site. It now has to be checked before final positioning within the tokamak.

• In India, the “top lid” of the tokamak is now complete and will be shipped to the ITER site. 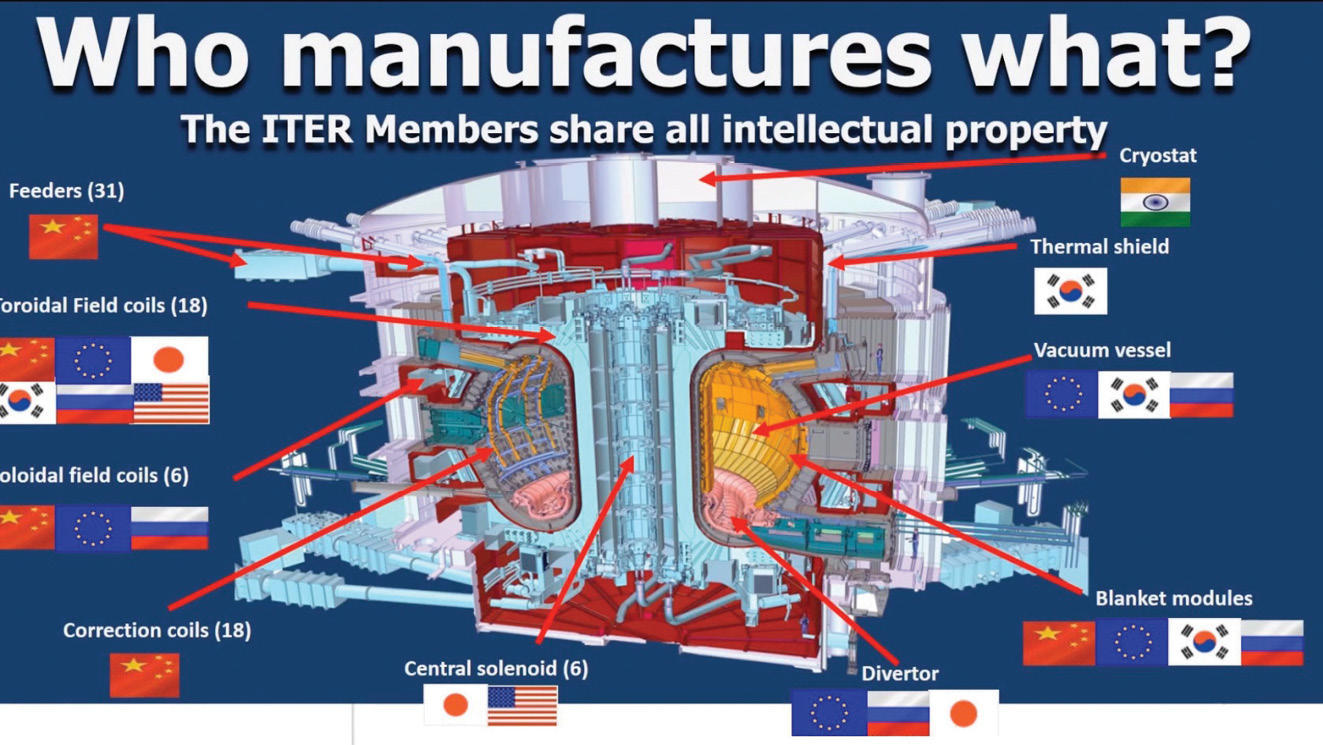 • Japan will also deliver the cage coils, the vertical field coils, toroidal coils that I mentioned before.

• Europe also is producing vacuum vessel pieces as well as Korea. And indeed we have the first vacuum vessel sectors. There are nine sectors. The first one has now arrived safely on site and is fully compliant with requirements.

• The U.S. and Russia are providing materials.

On the ITER site, the largest pieces, which couldn’t have been transported, are on their way to being completed. They are [four of] the “poloidal field coils.” The largest one is 24 meters in diameter. It was not considered viable to transport them from another country. So this is why we experienced during this last month the quite massive arrival of many components. Some coils and some equipment which is now on site and ready for assembly. We are now preparing all these different components, including these first poloidal field coils which have arrived on site, in order to be able to assemble them.

To do that, we have to have all the civil engineering works ready to accommodate the equipment. Many buildings are on their way to being completed and finished in order to accommodate the equipment. As of now, 70% of the total work, from design to first plasma, has been completed. And since we have been progressing quite well, during the last five months, reaching on the order of 70%, we feel that we are on track to achieve the challenging goal of first plasma in 2025. 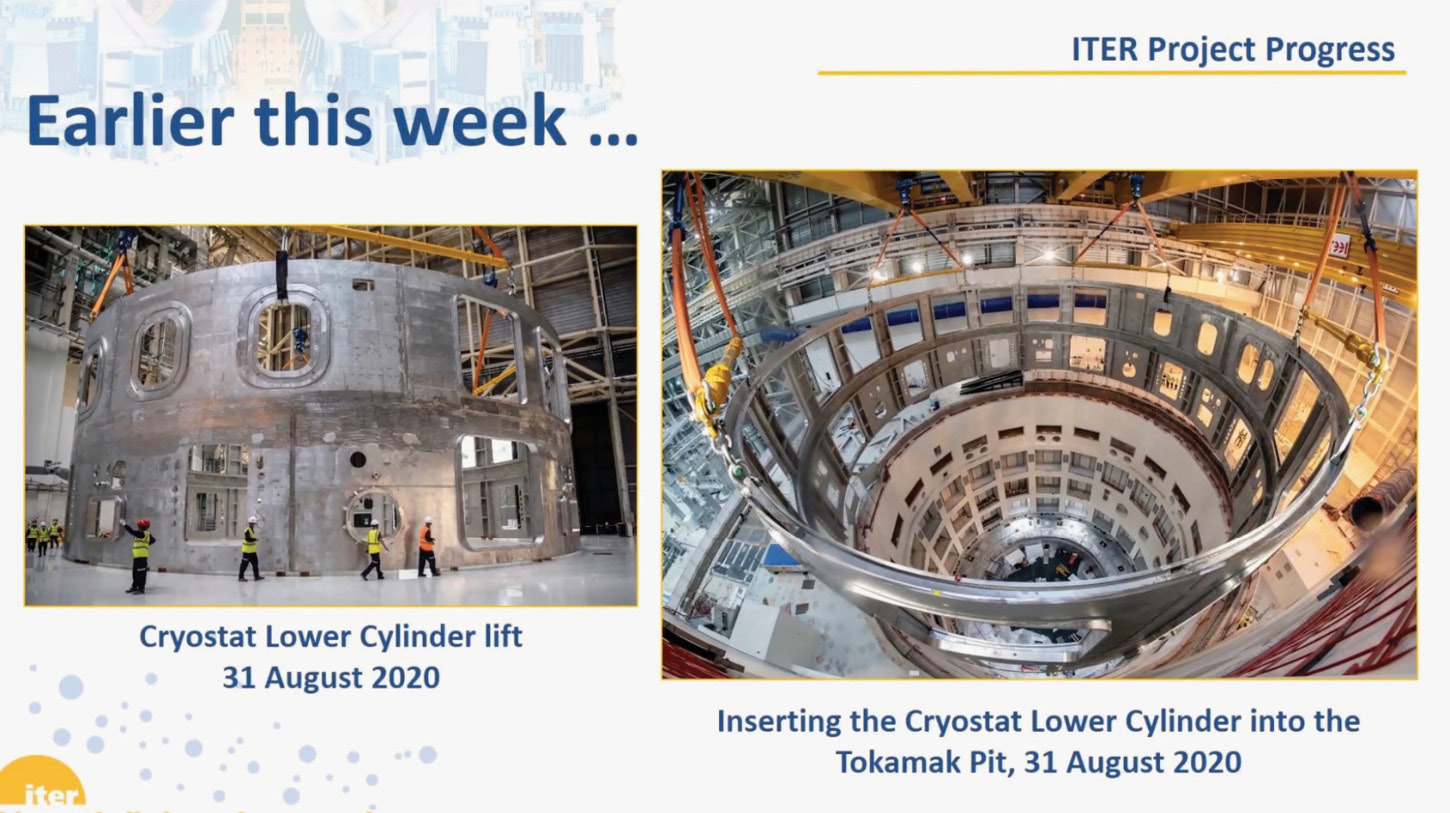 We are preparing now for machine assembly due to the fact that the civil works are so well advanced and the components being on site. This summer, we moved what we call the “cryostat base” as well as the lower and upper cylinder, which are large boxes of 30 meters diameter and 30 meters high, to the tokamak “pit,” i.e., the building where the plasma will be fusing. The large cryostat base, lifted nearly 50 meters above the ground. It has since been deposited on the tokamak base earlier this week (Aug. 31). Very impressive and a big challenge, because of its large size and the precision with which we have to position this equipment—a precision below 5 millimeters.

We are really ready to go now for the first pre-assembly, the pre-assembly of the vacuum vessel, on site, as well as the toroidal field coils with the assembly line and we are now commissioning all these different sequences to be sure it will be safe and of high quality.

I hope I have convinced you that hydrogen fusion is on its way to becoming an option for the world’s energy supply. There is a large benefit from it, but there are still a lot of challenges to be overcome in order to demonstrate it. We feel that it will be possible, after first plasma in 2025, to go on for full fusion power ten years later, in 2035, and by the year 2040-2050, to have made all the needed demonstrations such that the utilities could then consider using this technology and substitute it for their large consumption of fossil fuels to produce energy, to produce electricity in complementarity with renewable energies. Indeed these two technologies could complement each other very well. One is massive and fully predictable, and the other, as you all know, is diffuse and intermittent. So, we have an option for the future.