A Producers’ Initiative: Change the System!

This is the edited transcript of opening remarks by Robert Baker to the Schiller Institute conference’s farm and food presentations, which were part of Panel 4 of the two-day September 5-6, 2020 conference. 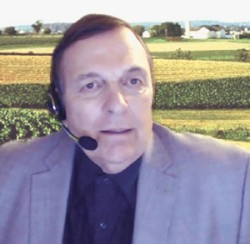 There are no physical economic limits to providing plenty of good food for every one of the seven and a half billion people on Earth, and the billions to come. We have a policy crisis.

Over a half century ago, right after World War II, there was a strong impulse to use science and good policy everywhere—to go out and rebuild from the war-torn rubble, and also to uplift everyone from the pre-war colonial oppression—especially the British colonies in Asia and Africa. The whole world was to grow in manufacturing, agriculture, infrastructure, and especially nuclear power. This meant not only energy, but nuclear science.

New institutions were crafted. The financial system was designed in 1944 in Bretton Woods, New Hampshire, and world figures came together. There were to be stable currency exchange, and credit for production. There were to be no globalist trade organizations, monopolies, over and above national sovereignty. Just a loose association of general agreements on tariffs and trade. All this is in the tradition of what, in the 1800s, was called the “American System” of economics.

The new international network for scientific research in crops and livestock was begun in Mexico, called the International Corn and Wheat Improvement Center. Henry Wallace, Franklin Roosevelt’s Vice President, set that up. Mexico became a grain surplus exporter, and because of that research, India became food self-sufficient in 1974. China became food self-sufficient in 1984. Centers like this were set up all around the world. We had rice research centers set up in the Philippines, potatoes in Peru, livestock in Kenya, and over 20 different areas of the world. This was a real “Green Revolution.”

But within a generation, this momentum for mankind was stopped. Currencies swung up and down. Food and farming were financialized. The Bretton Woods system was put out of business. You got credit only if you obeyed the terms of Wall Street and the City of London—the centers of monopolistic colonialism. Farmers and manufacturers tried to hold out, and ride the wave of generations before them, but they were undercut.

The public was told: You’ll get cheap food if Walmart takes over your county. Farmers were told: You have to compete, so get big, or get out. Government was told: Your food has to be outsourced, not just grown in your own country. Bring it in cheap. You are not allowed to support your farmers anymore.

Commodity control cartels grew like the world has never seen. All types of foods were forced under terrible control by a web of cartels. After the 1970s, cartels even changed the laws so that they got patent rights for developing new life forms, new genetic material!

Now, look at the U.S. Eighty percent of all cattle are slaughtered—and combined with meat from around the world in other countries—by four transnational mega-corporations. One of the four is JBS, a Brazilian-owned company. It is the world’s biggest meat company, operating from Germany to Australia, on five continents; it has 230,000 employees, gigantic packing houses, huge—and slave labor in Germany from Romania and Bulgaria. In the U.S., meat comes from Africa and Central America. And in Brazil, it comes from the poorest people with no other livelihood. The producers are systematically underpaid for their cattle, sheep, chickens.

This has become the norm. This is what we’re up against. I can show you the same thing with all the other cartel companies. When the COVID-19 virus hit, no wonder these plants shut down, and food chaos hit. Farmers and ranchers were then stuck with millions of cattle and pigs with nowhere to process them. They can’t withstand bad weather, a virus, or anything. This cartel system is for making money, and not food.

But there is momentum to change it. In the United States, for example, there are pushbacks, which President Donald Trump has responded to. In May, Trump ordered the Department of Justice to investigate the cartel price rigging. In July, the Senate has a two-party bill, to mandate that half of the purchases of cattle by the cartels must be from open cash markets, not rigged, contracted prices behind the scenes. There’s a petition to restore country-of-origin labelling, whereby imported meat must be labelled so people know where it’s from. Congress had gotten rid of this in 2015, but the petition now has over 500,000 signatures to reinstate it.

But we must change the system. President Trump is not going to go the whole way against this cartel system, with Wall Street still in his Cabinet. I myself recommend we commit to a “Producers’ initiative”: Wherever we live, everywhere in the world, and whatever we produce, to insist that we change the system.

We have examples all across the U.S., of producers trying to get food to the charities, feeding people who need it. Make this international. Cross all borders. Country and city people. Nation to nation. Jump the fence! Cross all boundaries. And we can restore morality to food.