We Cattle Ranchers Have a Heart

This is the edited transcription of Nicole Pfrang’s presentation to the Schiller Institute conference on September 6, 2020. A cattle rancher, Ms. Pfrang is Secretary-Treasurer of the Kansas Cattlemen’s Association and a recent Kansas State University graduate. Nicole is a leader in cattle country, while still in her mid-20s. 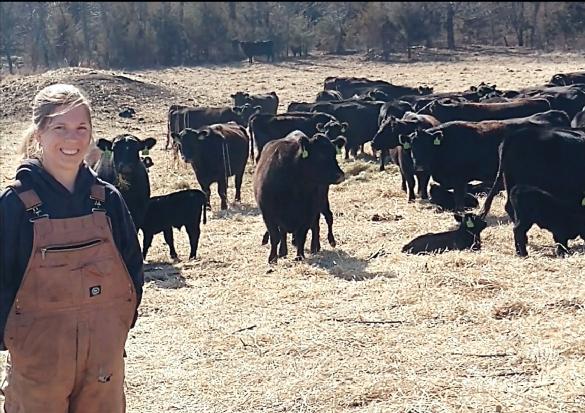 I’m a fifth-generation cattleman. I live in Kansas. Being a cattleman, we go through a lot with people doing labelling. A lot of people—especially with the World Wildlife Fund, animal rights people, and pretty much our own government—they’re saying, we’re the bad people. They say we don’t know what we’re doing; they say they need to take over.

Well, two years ago we had the worst winter I could ever think of. It was snow every other day, ice every other day, and we still had to get up and check our cows, because it was calving season—we have a fall and spring herd. I would wake up at 5:30 to check on the heifers, Mom would check on the cows. It was getting so bad that we would ask, “How many are dead?” We don’t do it because we’re heartless; we have a heart. Yes, it’s our income, but we take pride in taking care of these four-legged critters!

The year before, we lost 452 farmers and ranchers due to suicide. You won’t hear that. We are a proud, proud people. You have to feel it in your soul that you’re going to be a farmer, that you want to take care of somebody, you want to help feed the world. We lost 452. This year that number jumped up to 515. That’s not all of it. A lot of numbers weren’t counted, because everyone puts it down as “farm accident.” When you hear “farm accident,” that’s actually a farm suicide.

Then the packers, they don’t care: They dropped the prices. This last spring, we were selling our last load of fall calves, and it was $1.18—oh, that’s a good price. Then, one of the Tyson plants in Kansas, it was a storage unit, full of boxes, not even on the site, caught on fire, and they had to shut everything down. Do you think the packers would have said, “OK, we’re going to compete now”? No. They all went into a back room and said, we’re going to drop the prices. Instead of getting $1.18, we got $0.99.

Then COVID hit. That has nothing to do with the beef industry. And you know what happened there? I saw the prices went down to $0.84, and the last time it was $0.84 was back when my grandpa was young. These packers don’t care about us.

They started what is called the Beef Checkoff program, to supposedly help promote beef, so consumers would be able to eat it. Well, they’re using that money to go and buy seating at the World Wildlife Fund to be part of the extinction of us ranchers.

Consumers Get the Blunt End of the Stick

The consumers don’t even know where their food comes from. The packers are saying, “We’re going to import.” We import from 20 different countries, and all 20 different countries have different regulations. They can use products that are illegal in the United States. We’re constantly getting a bad rep, because we’re getting ground meat from Brazil coming over and it’s contaminating our meat. Consumers are told to blame us. Consumers want American products. The only way to sell the cheap foreign product is to stamp it “Product of USA.” That shoots the price down, and that even shoots the price down for the foreign countries.

Us Americans, we raise the safest meat in the whole world, and they don’t care about us. We know how to take care of it. They say [the issue is] “sustainability.” We’ve been sustainable for hundreds of years, thousands of years, and we keep getting more sustainable. We know how to take care of our livestock. But we’re the ones that are dying. My livelihood is dying, because we’re going bankrupt because we can’t afford all the damage that Mother Nature throws at us, and all the damage that the media put on us.

And the poor consumers are getting the blunt end of it, because they’re thinking they’re buying healthy, when they’re actually not. Just please, I want to do what’s right for the consumer. The consumer has the right to know where their meat comes from. The consumer has the right to know that it’s healthy. The consumer doesn’t need to live in fear and be forced to eat dog food. That’s what they’re going for now. They’re saying, “Oh, the Whopper burger is pretty much,—” Just look at the ingredients that are in that. It’s the ingredients of dog food: All they have to do is put water in with the dog food, mash it up, and find seasonings to make it smell like meat. Do you want to eat dog food? Just keep turning a blind eye.