A View of Relations Between China and Western Nations 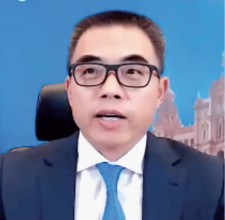 The following are edited excerpts from the opening remarks delivered by Yao Fei on October 21, 2020, to the conference, “China and the West Face to Face: Rivalry or Cooperation,” co-sponsored by the Schiller Institute and Spain’s Cátedra China think tank. Yao Fei is the Minister Counsellor of the Embassy of the People’s Republic of China in Spain.

It is my great pleasure to participate in this discussion, co-organized by Cátedra China and the Schiller Institute. Allow me to share my personal observations on how to view relations between China and Western nations, represented by the United States and the European Union.

I. Trade and cooperation which China carries out with the Western world is of mutual benefit and shared gain.

China established diplomatic relations with the European Economic Community in May of 1975, and with the U.S. in January of 1979. Currently, China, the U.S. and the EU, as important forces on the world scene, represent more than 60% of the world economy and share broad interests in common…. In 2018, trade in goods between China and the U.S. rose to $633.5 billion. Bilateral trade and economic relations support 2.6 million U.S. jobs and help each American family save $850 annually. Today there are more than 70,000 American companies that invest in China, of which 97% are profitable.

According to the survey which the U.S. Chamber of Commerce in China conducted in May of 2020, 84% of U.S. companies don’t want to leave China and 38% are inclined to maintain or increase their investments in the country. In terms of U.S.-China economic and commercial cooperation, China receives capital, technology and administrative experience from the U.S., while the latter is able to occupy the highest level of the world’s industrial and value chain, thanks to its access to the Chinese market and its cooperation with China.

In summary, the idea that the “U.S. loses” is contrary to reality, as both sides have been great beneficiaries. Economic and trade relations between China and the EU have similarly been of mutual benefit and “win, win.”

II. China is open to develop more cooperation with the Western world.

… The better life for 1.4 billion Chinese that China aspires to must necessarily involve an international environment of lasting peace and participation in international cooperation in the face of global challenges. In this area, China applies a peaceful and independent foreign policy, counting on a new path of inter-state relations characterized by dialogue and association instead of confrontation, an alliance based on friendship and cooperation with all. China defends multilateralism, advocates the building of a community of shared destiny for humanity, and proposes the joint construction of the Belt and Road. ...

III. It’s relevant that the West deal with the rise of China in a rational and objective form, seeking more cooperation and creating fewer problems.

Given China’s development over the past number of years, some U.S. and European leaders, high-level authorities, academics and media harbor very complicated feelings, with a mix of envy, frustration and discontent. China has reiterated that it follows a policy of peaceful development without the slightest interest in confronting the West. But despite our clarification, China continues to be defined as an adversary, and reality is distorted with speculation about China with such rhetoric as “trade with China is unfair,” “China is stealing intellectual property,” “militarizing the South China Sea,” “security problems with Huawei’s 5G,” “re-education camps in Xinjiang,” and “Hong Kong’s autonomy,” among other such. Worse, taking advantage of the pandemic, [these Western voices] flagrantly attack China, proposing to decouple from it. …

I would like to close by pointing out that it’s normal that China would differ from the West in history, culture, traditions and political and economic systems and that it should not be assumed that these differences are an obstacle to both parties jointly taking on global challenges to achieve their greatest development. I am convinced that as long as China and the West walk on the path of strengthening their cooperation, humanity’s future will be a better one.