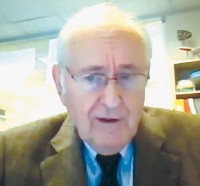 The following are edited excerpts from the opening remarks delivered by Jacques Cheminade on October 21, 2020, to the conference, “China and the West Face to Face: Rivalry or Cooperation,” co-sponsored by the Schiller Institute and Spain’s Cátedra China think tank. Mr. Cheminade is the Chairman of Solidarité et Progrès political party in France. Subheads have been added.

We have reached a decisive moment in world history where the ability of humanity to survive is being tested within each of us. It is a reason to be pessimistic only if we avoid facing the issue or keep thinking in the same way that has brought us to the situation where we are. Geopolitics is one of the four viruses that express this suicidal trend, together with the financial, Malthusian, and bureaucratic viruses, the four horsemen of the Apocalypse of our times, or, the four dragons threatening the world, to speak in terms used by Asian cultures.

The prevailing financial dictatorship, labelled ultra-liberalism, being unable to invest money for the physical future of humanity, is under the rule of an oligarchy committed to depopulation in a world of finite resources, its destructive world: Malthusianism. Malthusianism is organized by a sector of bureaucrats controlling the resources and manipulating opinion to keep its masters on top and maintain the rest of the population in a state of willing submission. You may call it “Deep State,” “permanent government,” “European Union,” “dwarfs of Zürich” or “London,” or “Our Crowd from New York”: all are the servants, historically, of an imperial oligarchy that mutates geographically and is now coming from an Anglo-American matrix. It forms a slime mold that tries to extend itself over the world, considering its interest against that of all the others.

The very word “geopolitics,” too often used by well-meaning fools, is what the oligarchy means by its pretense of a never-ending power exerted through a permanent state of war. It’s a world conceived as a geographical game-table where the winner expects to win all the bets, with the help of bureaucratic croupiers, dealing cards to the players provided by the oligarchical casino owner. Chips and cards meaning of course weapons in the real world, and casinos, what the megabanks have become. Around this great suicidal game develops a culture of death, because gambling addiction destroys our human creative power developed in a rational world.

Geopolitics is based on systems created by relations of power within areas, spaces, or geographical elements in a given order, defining a pseudoscientific theory of historical, geographic, and eventually ethnic determinisms. Its name is associated with such names as Halford Mackinder, Alfred Milner, Cecil Rhodes, Zbigniew Brzezinski, Henry Kissinger and figures in Germany (Karl Haushofer), Russia (Alexander Dugin), and France (Yves Lacoste, and today’s Aymeric Chauprade). It was originally the product of British imperial circles. Mackinder—honremos el fundador, honor the founder—wrote a paper in 1904, “The Geographical Pivot of History,” defining the need for the Empire to control the “geographical heartland” located in Central and Eastern Europe (with emphasis on Ukraine, Western Russia and Mitteleuropa.) His conclusion is:

Such a geopolitical conception was shared by the German Karl Haushofer, who founded in 1923 the German Journal of Geopolitics and developed the concept of, the need for Germany to control and eventually populate with Aryans the territories East of Berlin. The common denominator of all these figures, all from the British imperial matrix even if they are not British, is that the world is not a unity and should be ruled by your friends against your enemies, by all possible means, as stated by the lawyer of the German Nazi regime, Carl Schmitt, and by many British related to the foreign offices of the British Empire.

This creates a universe where you are justified in conquering other countries and extending your power against them all. If you are a smart British imperialist, you divide to rule, and you always try to pit against each other the continental powers of Europe: It started against France, when it was the main power in Europe, then against Germany, to create a big war to prevent unity in the Heartland, throwing Germany against Russia. If you are a barbaric Nazi, you run with all your forces against the red flag, as a stupid bull in the arena to conquer the lebensraum.

This has been the scheme of the main protagonists of the Great World Wars of the 20th century and the basis for all the murderous colonial adventures. In 1912, Homer Lea, in The Day of the Saxon, urged the Anglo-Saxon race to react by all means against a threat from the German (Teutons), the Russian (Slavs), and the Japanese expansion (the yellow peril), thus openly adding the racist component inherent to geopolitics …

Speaking at Chatham House (British Royal Institute of International Affairs) [in May 1982], Henry Kissinger first stressed that “fortunately Britain had a decisive role over America’s awakening to maturity” after World War II, and then admitted: “In my incarnation then” as National Security adviser, “I kept the British Foreign Office better informed and more closely engaged than I did the U.S. State Department.” The comment of historian Paul Kennedy at the 2004 centennial of Mackinder’s “Geographical Pivot of History” appears thus adequate:

Right now, with hundreds of thousands of U.S. troops in the Eurasian rimlands ... it looks like Washington is taking seriously Mackinder’s injunction to conserve control of the geographical pivot of history.

Later, President Barack Obama and his advisors elaborated, against the rising economic power of China, the concept of the Asian pivot—same word and same intention, this time in the Asian Heartland. Today, Mike Pompeo from the State Department and his West Point pal Mark Esper, Secretary of Defense, lead the same policy of China-bashing and technological warfare, together with their allies of the Five Eyes (Australia, Canada, New Zealand, the UK, and the U.S.) and the community of the Anglo-American intelligence services. As for Kissinger, in his NSSM 200 Memorandum, “Implications of Worldwide Population Growth for U.S. Security and Overseas Interests” (December 10, 1974), he stresses that less-developed countries should be forbidden to develop their industries and technologies, a development which could prevent the West from benefitting from the looting of their raw materials and minerals. He calls, as a consequence, for the reduction of the populations of such less-developed countries “which is a vital question for the national security of the U.S.”

Again, all these conceptions come, even for those who are not aware of it, from the British imperial model. For them, all the potential to counter such a model has to be eradicated.

If I had to say in one sentence what the oligarchy never forgives American economist and visionary Lyndon LaRouche for, it is having answered to the Club of Rome’s Limits to Growth that There Are No Limits to Growth—inspiring hope and optimism in the most creative scientific terms against the fear and pessimism spread by all enemies of humanity. And he continued until his last moments, from Earth’s Next Fifty Years to his last pages, to deepen his thinking by taking all decisive challenges in the most un-academic way, at a level above the terms in which they were raised.

Given the world situation, all forces opposing the Anglo-American geostrategic-Malthusian destructive policy should be supported. This means supporting economic coexistence, as a change of world direction and way of thinking. Charles de Gaulle used to call it “détente, entente et coopération”—disminucion de la tension, entendimiento y cooperación. Lyndon LaRouche and Helga Zepp-LaRouche use the idea of the coincidence of opposites, meaning a higher principle to solve apparent contradictions that exist at a lower level.

Let’s see what our thoughts could be about China. The great German philosopher Wilhelm Gottfried Leibniz, in his Novissima Sinica, expected, at the end of the 17th century, that very fruitful exchanges could take place. For him, China needed Western scientific missions to learn science and Western Europe needed Chinese missions to learn the Confucian art of social harmony. Russia, in the middle of the road, could have benefited from both—a very different way to understand Russia than that of a Heartland to be conquered and controlled. …

According to Confucian principles, the Chinese conception of absolutely inclusive relations among nations is tianxia. This system entirely meets the criteria of compatibility of Confucius and the norms of the “compossibility” of Leibniz. It is not an idealist fantasy, it is a system of relations to guarantee peace and security and excludes the strategies of competition and hostility, i.e., geopolitics. It aims at making unsuccessful any action aimed at destroying the other, so as to guarantee that coexistence becomes the condition of existence, defining a world order of existence whose principle is coexistence without uniformization. This is what President Xi Jinping calls a win-win system, for the common advantage of all participants. ...

It is by bringing people together for such a higher purpose, a common cause for China and Europe, together with the U.S., that we can overcome the status of rivalry stressed by the European Commission, and reach for the good of the other in a friendly partnership. If we treat Africa as our sister, we can build a human family.