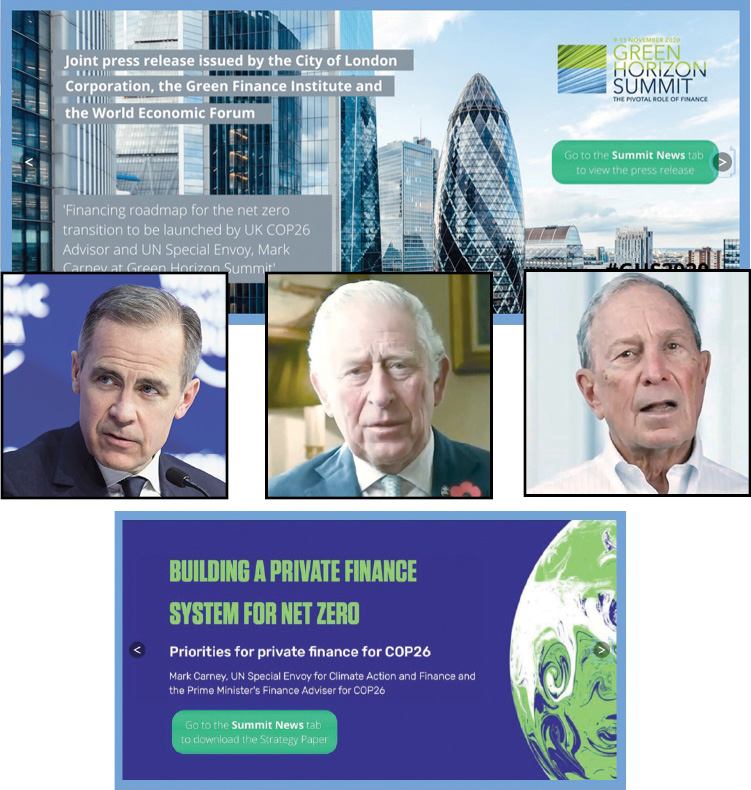 WEF
Among the luminaries speaking at the Green Horizon Summit were (middle row, left to right): Mark Carney, UN Envoy for Climate Action and Finance (former Governor of the Bank of England); HRH Charles, Prince of Wales; and Michael Bloomberg, former Mayor of New York City. Their goal: net-zero carbon emissions by 2050.

Nov. 14—A slew of the planet’s most prominent bankers, billionaires, and hangers-on met November 9-11 in London and on-line for the conference, “Green Horizon Summit—The Priority Role of Finance.” The event, hosted by the City of London Corporation, which is the core square mile of the financial neo-British Empire, was co-sponsored by the World Economic Forum (WEF) and the Green Finance Institute, itself funded by the City of London Corp., the British Treasury, and other UK government ministries. The conference was the latest and most extravagant yet of the “Great Reset” initiative to remake the world economy post-pandemic. This vainglorious project, effectively a plan to seize huge amounts of wealth from nations and their citizens worldwide, was launched in June by the WEF, and by the British crown, represented personally by His Royal Highness Charles, Prince of Wales.

This week’s gathering, and the power-grab process underlying it, signify a regime-change operation underway by the City of London and Wall Street, to displace governments and take over what should be nations’ sovereign authority over their economic and financial systems.

Among the more than 100 luminaries on the roster were Mark Carney, currently UN Envoy for Climate Action and Finance, and former Bank of England Governor (2013-2020); the heads of the International Monetary Fund, the European Central Bank, and the Bank of England; top officials from major banks and finance companies, e.g. BlackRock and KPMG, and others. UN Secretary-General António Guterres spoke. A host of the usual green ghoul personalities participated, from Prince Charles, to Sir Michael Bloomberg and Bill Gates. There were 10 sessions over three days. 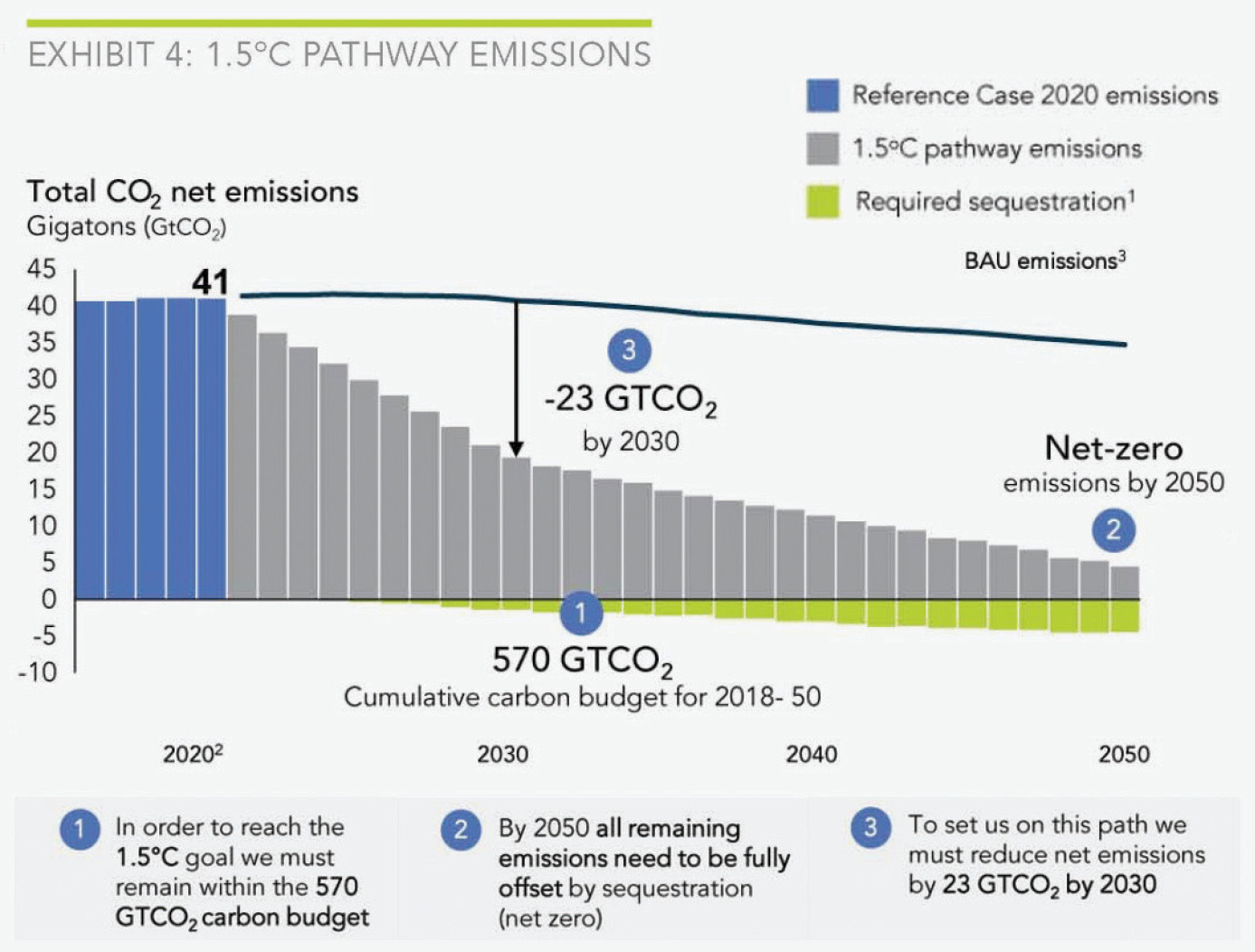 WEF
This chart from the Green Horizon Summit plots a pathway to net-zero carbon emissions by 2050. If allowed to succeed, this “Great Reset” will deindustrialize the world economy and massively reduce the human population.

The explicitly stated message, conveyed in various ways by the different speakers, is that carbon emissions must be reduced to net zero by 2050, and well on the way to that by 2030, or life on Earth will perish. Therefore, the transition must be thorough and fast to end fossil fuels and transform, i.e., downgrade, all other aspects of the economic base of existence accordingly. The method to do this, given that governments may be too slow, is to use “finance” to enforce the green transition. This means to selectively withhold credit to, and heavily tax, taboo emitters such as coal plants, cows, and too many people. Instead there must be measures to induce and coerce funds to go into approved “green” investments—solar and wind energy, plant-based diets, etc.

Mark Carney is a lead activist in this process, and spoke about it, along with Sir Michael Bloomberg and the many others. They were the ones, after the 2015 Paris Accord on Climate Change, who set in motion a network of new, and ramped-up agencies and initiatives with major central banks and huge private banks of London and Wall Street at their center. Their purpose was to set standards and rules to penalize investments and activities proscribed by Wall Street and the City of London, and to demand governments support whatever the green bankers wanted instead, from windmills, to ending meat-eating. (See the September 2019 EIR Special Report, ‘CO2 Reduction’ Is a Mass Murder Policy Designed by Wall Street and the City of London.)

The unstated message at this conference, and all along, especially since 2015, is twofold: big bucks can be made off a new Green Bubble, which Wall Street and the City of London need to continue their existence, given that their system is at the blow-out stage, after years of casino banking, not productive investment. And the second, and touchy part of the usually unspoken message, is that there are too many people on the planet anyway, and getting rid of a lot of them through downgrading their means of existence, is desirable.

In terms of these goals, this week’s conference is part of two overlapping campaigns. It figures in the countdown to the November 2021 COP26 world conference in Glasgow. Mark Carney is the official COP26 Finance Adviser on this to Prime Minister Boris Johnson. (For a thorough profile of Mark Carney, see Paul Gallagher’s EIR article, “Mark Carney: The Prince (Charles) of Central Bankers.) And on a parallel track, the Green Horizon finance event is part of the series of conferences on various themes—energy, transportation, agriculture, health care and more—of the Great Reset initiative launched June 3, by HRH Charles and the World Economic Forum.

The Prince: Pandemic a ‘Great Opportunity’

An especially odious point was made at the launch of the Great Reset June 3, stressed by Charles, a co-sponsor with the WEF, who said that the pandemic has provided a great “opportunity” for zero carbon emissions. Since the economy is suffering, when it is built back, it can be green. Then this week he said:

The current pandemic has brought unimaginable devastation to people’s lives, livelihoods, and national economies. At the same time, the green recovery represents an unprecedented opportunity to rethink and reset the ways in which we live and do business. I have long believed we need a shift in our economic mode, that places nature and the world’s transition to net zero [emissions] at the heart of how we operate, prioritizing the pursuit of the sustainable … growth in the decades to come.

Charles unveiled a ten-point action plan, which he calls his “Marshall Plan,” revolving around carbon pricing, carbon taxes, carbon market exchanges, shutting down fossil fuels, and establishing large-scale green financing in hundreds of trillions of dollars. (The “Marshall Plan” tag is apt for the British; unlike other European countries, they used their Marshall Plan aid after World War II solely to pay their otherwise unpayable debt. Now they are trying to do it again on a far vaster scale, over the opposition of the American President Trump.)

The Prince said that the need is to “proactively mobilize investment in sustainable infrastructure with a focus on carving out a global asset class for sustainable project financing to unlock capital currently invested elsewhere.” How many are ready to have their capital “unlocked” by this thief? Charles and his City of London allies have built up to this green fascism over five decades. Now, they have accelerated.

WEF CEO Klaus Schwab speaks in the same language as Charles about the pandemic being a benefit for a green economy to come. Schwab, as stated on the WEF website for its “COVID Action Platform,” says, “The pandemic represents a rare but narrow window of opportunity to reflect, re-imagine, and reset our world.” On the last day of the Green Horizon Summit, KPMG official Michael Hayes said that COVID-19 has been, “nothing more than a dress rehearsal for climate change,” so it is time to act fast.

Speaking at the opening of the Summit, Carney stressed the commercial benefits of “going green.” This theme is carried through in two reports released this month. The first is by Carney, in his official capacity for the UN and as Prime Minister Johnson’s Finance Adviser for COP26. Titled, “Building a Private Finance System for Net Zero,” the 30-page document has as its premise, that financial networks are to rule the world, so investors—including governments, must comply with the green terms that are being set for them now.

A second report out this month, titled, “Taskforce on Scaling Voluntary Carbon Markets,” results from an effort led by Mark Carney, involving the Institute of International Finance, McKinsey Management, and Bloomberg Philanthropies. The 100-page document focusses on how to cadge businesses to participate in green markets, which, states the report, have to increase 15 times over by 2030.

Chairman of the Taskforce, Bill Winters, CEO of Standard Chartered Group, spoke at the Green Horizon Summit on how the current compliance of business in decarbonization is too small, and not “consistently credible.” So, he says, the proposed “voluntary carbon market fills that gap.” HRH Charles did his part for this drive by setting up the Sustainable Markets Initiative in September 2019, in league with the World Economic Forum.

Certain notable green finance events occurred in Britain during the time of the conference. Chancellor of the Exchequer Rishi Sunak told the Commons on November 9 that in 2021 the UK will issue its first green gilt—a government bond that will be floated on the financial markets, whose funding will go to carbon-reducing projects. He also announced his government’s commitment to phase in mandatory green rules. Sunak, who also addressed the summit the same day, said, “We’ve announced the UK’s intention to mandate climate disclosures by large companies and financial institutes across our economy by 2025 … [making Britain] the first G20 country to do so.” Bank of England Governor Andrew Bailey told the conference that the UK government’s goal is “supportive of the transition to a net-zero economy. In the aftermath of the financial crisis, we took far-reaching action to make the financial system more resilient against crises—COVID is the first real test of those changes.”

Thus, what the City of London Corporation’s Green Horizon Summit said in its title, “The Priority Role of Finance,” it meant. The event was a conclave on how sovereign governments must be made subservient to the new “green finance” control networks. This is the meaning of the Great Reset: The Great Regime Change. The Summit was closed by William Russell, the Lord Mayor of the City of London, who blithely promised that there will be more details to come on the necessary post-pandemic, green “transition” to COP26. Carney menacingly warned that, “leaders and laggers on the road to Glasgow” will be under watch.