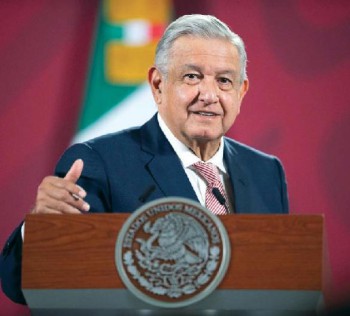 “What is this … in the country of freedoms, of the free press, all of a sudden they censor the President? That is no small thing. That had not been seen, the media censoring.”

Nov. 14—When the U.S. media usurped U.S. law and declared Biden-Harris the victors of the U.S. election, Mexican President Andrés Manuel López Obrador informed reporters that Mexico would not congratulate Joe Biden or Donald Trump as the winner “until the electoral process is over…. We want to wait until the election in the United States is legally settled.”

López Obrador (often called AMLO) argues that it is not Mexico’s place to decide for U.S. citizens who won their election, while vote tallies are being challenged in U.S. courts. Such “pile-ons” of international “recognitions” were used against AMLO’s own presidential bid in 2006, while he and his supporters were mobilizing against the flagrant vote fraud used to impose his opponent, Felipe Calderón, in the Presidency.

Despite threats that if Joe Biden should become the next U.S. President, Mexico will face “reprisals” for this defense of United States’ sovereignty by López Obrador, he has refused to yield, as a matter of principle. In response to the threats, he instructed Mexican officials to not even accept calls from the Biden transition team, because it has not been legally certified as the next government.

AMLO, almost uniquely among world leaders, has dared to speak out publicly against the monstrous threat to the sovereignty of all nations represented by this Establishment stampede to use the media as a weapon to impose a Biden victory. Speaking to reporters on November 9, the Mexican President warned in particular of the implications of the media censoring Donald Trump’s November 5 address to the nation.

What is this… in the country of freedoms, of the free press, all of a sudden they censor the President? That is no small thing. That had not been seen, the media censoring. I am talking about the United States, because in Mexico, we are already used to how they censor us, we don’t exist, this is nothing new. But in the United States what happened is unique, in the internet or in social media networks and then the big news media…. And the freedoms? ...

We all have the right to speak out. There is a classic phrase … “I disapprove of what you say, but I will defend to the death your right to say it.” … There are times in which it is necessary to go back to the beginning, to return to the past, because that temptation to silence, to censor, should be driven away.

López Obrador has been clear that his government will work with whomever finally wins the U.S. Presidential election, and fully expects that relations will be friendly. At the same time, it is clear there is no love lost between Mexican nationalists and the Democratic Party of Obama-Biden. AMLO has gone out of his way more than once since the election to warn Biden and his team that should they win, his government will not tolerate the flagrant violation of Mexican sovereignty carried out by the Obama-Biden government’s covert “Fast and Furious” operation, which channeled top-grade military weapons to the drug cartels operating in Mexico.

Left: Government of Mexico; right: UN
Mexican President Andrés Manuel López Obrador (left) says no to “recognizing” a U.S. election winner until it is certified; he himself was defrauded of the Mexican Presidency in 2006 in favor of Felipe Calderón (right).

While Mexico’s Establishment media and ancien regime politicians are outraged that López Obrador dares speak of the great battle taking place in the United States, many of his supporters are closely and enthusiastically following the ins and outs of President Trump’s battle to expose the clear vote fraud used against his country. Large social media programs associated with the AMLO camp are discussing the vote fraud as a continuation of the “coup” against President Trump and as a threat to Mexico.

Several have turned to the LaRouche movement for an evaluation of the strategic terms of this battle. Notably, EIR’s Mexico City correspondent, Gerardo Castilleja, has become a regular on Mexico’s Sin Censura YouTube program which broadcasts from Chicago.

Given that the international media have censored in great part what the Mexican President has actually said, EIR publishes here excerpts of his remarks.

AMLO was asked to further explain his position in his November 9 daily morning press conference:

I want to inform the people of Mexico that the position of the government which I represent on the elections in the United States is to wait for the U.S. authorities responsible for the electoral process to decide on the winner of the Presidency. ...

I have the power and at the same time the obligation to conform to the very clear Constitutional mandate as to foreign policy. Article 89 of our Constitution, Subsection 10a, establishes that foreign policy must be guided by the principles of non-intervention and the self-determination of people. … We cannot get involved in the politics of other nations. …

Why this position? Because we do not want there to be foreign interference in our affairs. Mexico is an independent, free and sovereign country.

This business of our passing judgement, is as if we were electoral judges, when our Constitution establishes that we should be respectful and not intervene until the Americans resolve their affairs. … They are going to finish the state counting, and if there are challenges, there are legal authorities which are going to decide. It could come to—I’m not saying this is going to happen—but the [Supreme] Court could resolve this; it did that at one point. So, is the electoral matter already over? Are there no challenges pending? ...

A journalist asked AMLO if his government feared a Democratic victory, citing his statements on different occasions that more Mexican migrants were deported under Obama.

No. … Should it be decided that Mr. Biden won, there won’t be any problem, because we have already defined a policy of respect. What is the case, is that we would not allow the introduction of weapons which President Calderón [2006-2012] allowed under the “Fast and Furious” secret operation.

But I am sure that they are not even going to dare to propose that to me should Mr. Biden be given the victory. So there is not going to be any problem.

The following day, a Mexican journalist cited reports that the Biden team had requested that AMLO’s government accept a phone call to start coordinating future relations, even if it had not yet formally recognized his victory. López Obrador recommended the bullying stop.

We have already clarified this matter sufficiently, and there is confusion—or people do not want to understand. … We cannot recognize in any way a government that is not yet legally and legitimately constituted. …

We are not against or in favor of anyone. Simply: we will wait for their processes to finish. … There are more than 140 million voters, one part voted for one party; another part voted for another. Where do we come off becoming the judge? Who authorized us to do that, to go and get involved in an internal process? We have to respect the citizens of other countries. …

If we don’t recognize them, there are going to be reprisals? No, there is no reason for reprisals, because we are sticking to our policy of principles. … Moreover, we are not a colony. We’re a free, independent, sovereign country. The Mexican government is not a patsy for any foreign government.

December 12-13Save the Date and Register Today!

The World after the U.S. Election:Creating a World Based on Reason

The unprecedented battle over the recent U.S. election is not only a domestic American event, but an event of the highest international strategic importance. The world must understand: This battle is the choice between World War III or peace. The two days of dialogue and deliberation will include these panel discussions:

Panel I. “Hang Together, or Hang Separately”: Free and Sovereign Republics, or Digital Dictatorship?

Panel II. Escaping the Danger of World War III: A Strategic Order Based on the Common Aims of Mankind.

Panel III. Overcoming the World Health Crisis and the Hunger Pandemic: Thinking on the Level of the Coincidentia Oppositorum.

Panel IV. A Human Future for Youth: A Beethoven-Driven Renaissance of Classical Culture.