This editorial appears in the December 11, 2020 issue of Executive Intelligence Review.

by Ramasimong Phillip TsokolibaneLeader of the LaRouche movement in South Africa 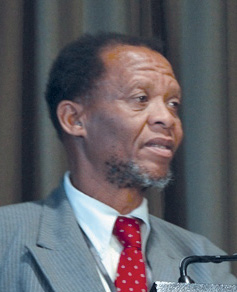 Dec. 5—Today, I write not as a representative of my country, but on behalf of all Africans, especially those who are dying or are about to die in the millions from the twin killer scourges of COVID-19 and the equally terrible killer, starvation.

Nearly two months ago, I appealed to the American President, Donald Trump, that he mobilize the full resources of his powerful nation, including the great power that is the American military, to bring the necessary aid to Africa to deal with the onrushing mass deaths that these twin crises are bringing to my continent. Only that type of mobilization, led by the American Presidency, and joined by the other great nations of this planet, including President Putin’s Russia and President Xi’s China, has the potential to reverse the greatest threat of genocide faced by Africa in this century.

Already, then, the unreported and under-reported deaths from the virus were mounting, as could be expected on a continent suffering from decades of under-development imposed by the Anglo-American global financial elites and their murderous allies among the African leadership.

The ultimate salvation of Africa lies in the adoption of the plans and programs for development proposed by the greatest man of the recent century, the late physical economist Lyndon LaRouche, and his wife and chairman of the Schiller Institute, Helga Zepp-LaRouche—programs that will finally bring an end to the decadent imperium of the Brutish Empire, and its City of London and Wall Street satrapy.

In repeating the warnings of the Executive Director of the World Food Program (WFP) and Trump friend, Mr. David Beasley—that unless food were brought to people who needed it, as many as 300,000 a people a day would soon be dying—I was indeed trying to shock people into sanity, out of their often narrow-minded concerns of their personal present, to impel them to act and to support bold action by President Trump.

South Sudan is one example of the hunger in Africa. There, 6 million of the 11 million people are hungry. But it’s much worse than that. Twenty-three percent of children under 5 are suffering from acute malnutrition. Many of them will die unless they can be reached with food. Many of the survivors may still suffer permanent mental impairment. But all of the major roads in a large part of South Sudan are highly insecure and are currently closed. There are only 280 km of paved roads to begin with, in this country the size of France. So an extraordinary logistical capability is called for.

There are many other hunger crisis areas in Africa—northern Ethiopia, the Democratic Republic of the Congo, northeastern Nigeria, a part of North Sudan, Zimbabwe, and southern Angola, to mention a few.

So far, my appeal, although repeated at the end of October, and despite the strong support of Mrs. Zepp-LaRouche and her newly-formed international Committee for the Coincidence of Opposites, has gone unanswered by the powers who must act, most notably President Trump.

While I understand Mr. Trump’s necessary focus on the recently conducted fraudulent election, which the global elites have used to anoint their chosen empty suit, Joe Biden, as the President-elect, President Trump must act decisively on these matters, if millions of Africans are not to die.

The President is still the President, no matter what the fake-news media and the murderous establishment says.

• President Trump has the power to declare an emergency, and to give America’s farmers the mission of raising the food that Africa needs.

• President Trump, as Commander-in-Chief, has the power to order the U.S. military, whose civilian command he recently seized from the proponents of perpetual war and death, to use its resources in concert with the WFP and allied agencies to get the food to where it is needed, even in remote areas, where the starvation conditions are already acute.

• President Trump can also make available as rapidly as possible supplies of vaccines and antivirals to Africa, at no cost.

• President Trump can order the U.S. military to assist in the distribution of anti-COVID medicine and related medical equipment and supplies, and call up an army of American volunteers, especially young people who can be trained to help.

• President Trump can show that black lives matter, not just in American cities and in the face of police violence, but also in Africa, where millions face death already and millions more will.

Mr. President: We need you to act as President right now. Time is running out. Hear my appeal and call on Presidents Putin and Xi to help solve this greatest humanitarian crisis of all time. You are the only hope for people on my continent whose cries for help have fallen on deaf ears. Greatness beckons you.