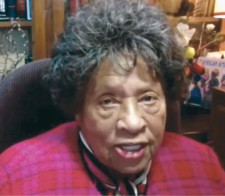 Dr. Elders is a physician, former Professor of Pediatrics, and the former Surgeon General of the United States. The following is her text as prepared for presentation to Schiller Institute International Conference on December 13, 2020.

At the end of 2020, we are in a turning point in our battle, not only with COVID-19, but with ourselves. We have to grow up and realize that the world’s nations must each have a reliable health response system, a prevention system, and an emergency warning system, in order to prevent the spread of pandemic. Old ideas of division in a situation of such a public health emergency, are even more lethal now than the disease itself. Luckily, though we now have more infections, we also have more information. Though we have more hospitalizations, we also have more knowledge of effective treatment. Though we have more deaths, we have the embryo of a solution in the form of vaccines, now being developed, tested, and applied.

Thanks to the success of initiatives, including Operation Warp Speed, the world is now poised to launch a life-saving mobilization in depth. We cannot be successful, however, without a corresponding mobilization of trust. Each community has to be informed, consulted, and then requested to participate. We have to also note that the psychological effects of the disease are every bit as devastating as the physical effects. We need a mobilization of hope.

Carving a Stone of Hope out of aMountain of Despair

Dr. Martin Luther King once talked about carving a stone of hope out of a mountain of despair. To do that, to carve hope out of the present situation, requires scientific knowledge, medical discovery, and disciplined, rigorous crafting of the tools for the delivery, use, and improvement of the antidotes, treatments and medicines. In addition, this needs to be done worldwide, precisely in order to note negative reactions to vaccines, as well as the potential for transmutations of the disease, or even the emergence of a new disease, even as we fight the old one. If that kind of collaboration had pre-existed the eruption of COVID-19, before COVID-19, we would not be facing millions of deaths worldwide now.

We of this committee are fully agreed on one principle: there must be a worldwide mobilization in depth, involving collaboration among different communities. Military capabilities, medical capabilities, and scientific research and development, at all levels, and from all nations. In a sense, all persons that are susceptible to the disease have now become accidental draftees in a war for public health.

David Beasley of the United Nations World Food Program has just informed the United Nations that as many as 270 million people may be facing death by starvation—not by COVID—over the next six months or more. This does not change the focus of our health initiative. Rather, it underscores the magnitude of the immediate emergency, in that generally unhealthy people are likely to spread the disease even more rapidly. Hence, today, at this conference, we have assembled a cross-section of persons from military, medical, agriculture and governmental fields to speak to the world, and particularly to youth of the world. We need everyone, and the ingenuity of everyone, to invent a new coincidence of opposites among nations, civilizations, and societies, each of which at least agrees on the necessity of surviving. This dialogue will carve a stone of hope out of a mountain of despair.

This dialogue involves the creation of an international public health response. This kind of idea was being discussed at the end of the Second World War. The time is come to create it. This does not mean a “one world” public health system; it means that each nation, participating especially through brigades of youth, is engaged in ensuring that any breakthrough made by one, can be made available to all. About the United States, I said in September:

A public health workforce can do far more to maintain our health, than 100 surgeons. Public health workers in these public health care systems are not doctors or nurses. Giving out masks, taking temperatures, and even contact tracing and some diagnostics, does not require one to have a medical degree, or to go to school for 12 years.

This would be a public health corps that could be interfaced with the Army Corps of Engineers, and many other agencies throughout the government. We need millions of public health workers in the United States, and the world needs tens of millions.

That’s what I said in September, and it’s even more true in December. It will be even more true in February, March, April, or May. So we don’t need to wait to get started, to talk about this during these six months, and say, “You know what? You were right about what you said.” We know we are right. Now, we have to do what is right.