Col. Black served in the Virginia State Senate (2012-2020) and House (1998-2006) and was the former chief of the Criminal Law Division, Office of the Judge Advocate General, the Pentagon. This is his prepared text for delivery on Panel 2 of the December 12-13 Schiller Institute conference. 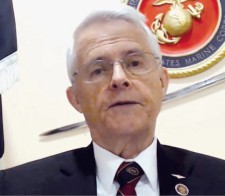 I come at this as a conservative Republican, elected to 16 years in the Virginia House and Senate. I served 32 years in the U.S. Marines and in the Army. I bled for this country and risked my life hundreds of times in battle. I was wounded and my radiomen died fighting beside me, rescuing a surrounded Marine outpost. Helicopters that I piloted were hit by ground fire four times. But I am well-versed in military and foreign affairs, and I am deeply disturbed by U.S. involvement with NATO.

Today, NATO poses a grave threat to world peace. It is the centerpiece of the deep state.

In 1949, NATO was formed to defend against perceived threats from the Soviet Union, which was a nuclear powerhouse. The Soviets responded to NATO by forming the Warsaw defense pact in 1955. By the grace of God, war was avoided. When the Cold War ended in 1991, the Soviet Union dissolved, and communism was discredited forever. The Warsaw Pact dissolved that same year. By 1991, NATO had no further purpose and should have been dissolved.

The prospects for permanent peace were bright. The distance between Germany and Russia was more than 3,000 miles. That was a huge buffer against accidental missile launch or hostile military action. That buffer would have made the risk of World War III extremely remote.

In 1990, President George H.W. Bush and top NATO leaders promised Soviet President Mikhail Gorbachev that if he would not interfere with the reunification of Germany, NATO would not move its troops one inch further east.

But they lied, and they lied massively. Instead, NATO rapidly advanced until their troops are now within 20 miles of the Russian border. NATO’s aggressive advance was roughly the distance from the U.S. east coast to the west coast. Instead of dissolving, NATO grew from 16 members to 30 members and the list is still growing. It is rapidly increasing its military expenditures even though it faces utterly no threat from Russia. NATO did this by falsely portraying Russia as a reincarnation of the Soviet Union. But Russia’s population is half that of the U.S., and its economy the size of Italy’s. Germany considered the threat of Russian invasion so remote that it slashed its Cold War arsenal of tanks from 5,000 down to 200 today—almost nothing.

Donald Trump campaigned on withdrawing from NATO, which he considered obsolete. His pledge to normalize relations with Russia and Syria would have destroyed the raison d’être, the very reason, for NATO and the deep state to exist. That was the principal reason he faced a continuing coup, followed by massive election fraud to deny him a second term in office. The Russia hoax forced Trump’s back to the wall. He was forced to modify his anti-NATO stance to merely demanding that NATO buy more weapons. And that, of course, only exacerbated the arms race.

NATO, the military-industrial complex, and the entire deep state employ millions of influential bureaucrats. Their livelihoods depend on public perceptions of nonexistent threats. Today, millions of defense-related jobs depend on creating a public perception of danger from abroad. Americans are taught to hate at least one-fifth of the world’s population—people who present no realistic threat to America.

Except for minor border skirmishes with Mexico, America has not been invaded since the War of 1812, when we were a small and weak nation. Today, we are a global behemoth. The U.S. defense budget is $732 billion—more than the defense budgets of the 10 next largest militaries combined. It is three times China’s, fifteen times Russia’s, and 40 times Iran’s.

The U.S. Navy has three times the naval tonnage of either Russia or China, plus enormous geographic advantages. The U.S. Navy operates 11 large, modern aircraft carrier groups that project global power. Meanwhile, Russian ships are Cold War relics, and they have only one modest aircraft carrier. The Chinese Navy is second largest, but it also has just one aircraft carrier. Marine troops are a measure of a nation’s power to project military force and to invade other countries from the sea. The U.S. has 15 times as many naval troops as Russia and 18 times as many as China.

As the leader of NATO, the U.S. routinely initiates reckless, provocative actions against Russia in order to deliberately heighten tensions. We repeatedly fly nuclear-capable B-1 and B-52 jets on attack vectors aimed at Russia. In August of 2020 alone, Russian jets were forced to scramble 27 times to intercept NATO warplanes near Russian waters. In August and September, B-52s flew close to Russian borders near Crimea and Kaliningrad, practicing nuclear cruise missile launches toward Russia from the Black Sea and Estonia.

The provocations became so militant and risky that in 2019, President Putin was forced to reveal his hitherto secret development of hypersonic nuclear missiles, just to deter possible offensive action toward Russia. In 2020, he announced that Russian warships and submarines would also be armed with hypersonic missiles. With virtually no buffer between NATO and Russia, these missiles—which cannot be intercepted—can reach New York City or Washington, D.C. from Russia in about an hour. Submarine-launched hypersonic missiles can incinerate those cities in just minutes.

Russia does not want war, and it most certainly does not want a nuclear war. But it cannot fight us conventionally, so it may be forced to employ its vast nuclear arsenal in self-defense. Yet the U.S. continues to eliminate remaining buffers against war. We have dismantled nuclear disarmament treaties that were painfully negotiated over decades. And now, we are developing small yield weapons whose only purpose is to make nuclear war a practical reality.

As of 2020, there were over 13,000 nuclear weapons, with thousands on hair-trigger alert. The less buffer between NATO and Russia, the greater the likelihood that a miscalculation will trigger a rapidly escalating nuclear exchange.

NATO, which once defended Europe, has expanded to fighting wars of aggression in the Middle East. It has engaged in Afghanistan for 19 years. NATO is now considering expanding to confront China too. These expansions provide justification for NATO to live on and expand. But they also raise the specter of nuclear war. If World War III breaks out, it will kill vast numbers of Americans, and NATO will be to blame. The death toll will exceed any war ever fought, many times over. It would poison the earth with radiation and cause the breakdown of trade, transportation, and food production. It may end civilization altogether.

We do not need to maintain this hyper-aggressive military posture. The oceans defend America as no other developed nation is protected. Unless we threaten others, we have no genuine fear of war. And ordinary Americans gain nothing from the endless push for war that kills and cripples our troops, bleeds our treasury, and soils our moral reputation across the globe.

When the nuclear balloon goes up, top government officials and global oligarchs will shelter in underground cities. But the rest of us will be incinerated by their folly. We will have NATO and the deep state to thank for our demise.