China and the United States: Rivalry, Confrontation, or Cooperation

Marcelo Muñoz is the founder and president of Cátedra China. This is the edited text of the English translation of his remarks delivered in Spanish on Panel 2 of the December 12-13 Schiller Institute Conference. Subheads have been added. 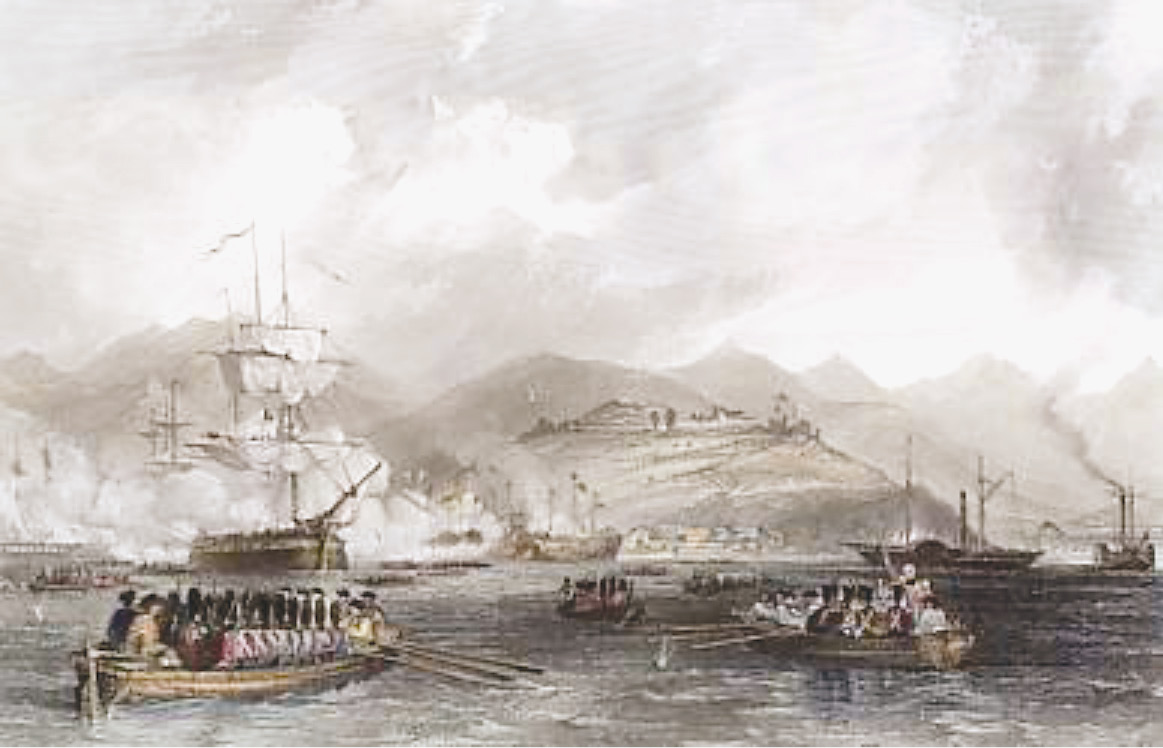 Sketch by Lt. White, Royal Marines, 1843
Today, the United States has a choice to make in its relations with China: It can either try to subdue the rising power, as the British Empire did in the mid-19th century, or work with China on an equal footing for shared progress. Shown, the British capture of Ting-hai (Dinghai), on the island of Chusan (Zhoushan), China in the First Opium War, July 5, 1840.

Two empires, representing two different worlds, very different, that have been meeting or confronting each other over the last two centuries.

Not the United States, but the British Empire, its white, Protestant and Anglo-Saxon counterpart, confronted China in 1840 with the “opium wars” to impose “free trade” in opium and occupy and colonially subdue much of its territory by force, to the point of eliminating China’s role in the international community.

The United States did intervene in China beginning in the second half of the 20th century, in the Chinese civil war that lasted 20 years, supporting the nationalist party against the communist party with economic support, credits, weapons, military advisers, and political support. The nationalist leader was the dictator Chang Kai-Shek. His wife Soon Mai Ling, of recognized beauty, a good public speaker and his brother-in-law, a financier, who channeled American economic aid—part of it diverted to his own fortune—led the nationalist lobby: she, traveling all over America, creating nuclei of political and economic support, at the time when McCarthyism was fashionable.

Mao’s victory surprised the world and the United States, which was occupied in World War II on the European front, in which Roosevelt got the United States involved, and on the Asian front, in which Japanese supremacist militarism, an ally of Nazism, had militarily occupied much of Asia and China. Chang Kai-shek with what was left of his army took refuge in Taiwan and established a secessionist government in 1949, which, for the United States, was an “unsinkable aircraft carrier,” in the words of Douglas MacArthur, by then viceroy of Japan and strategist against Chinese communism.

And that is what Taiwan has remained—a bulwark against China, with the economic, military. and political support of the United States, to maintain China’s territorial division, contrary to United Nations resolutions accepted by the international community and by the United States itself, resolutions that recognize only one China and Taiwan as part of China.

We start from this historical introduction, because history, well understood, is “life’s teacher” and, in this case, rivalry, confrontation, or cooperation between the United States and China cannot be understood without having analyzed in some detail the relationship between these two countries, two Empires, Chinese and Western, over the last two centuries.

The domination of the British Empire over much of the world, from the middle of the 19th century to the beginning of the 20th century, coincides, and was, to a large extent, the cause of the collapse of the Chinese Empire until its disappearance.

The emergence of the American Empire and its power joined other Western countries, after the Second World War, to organize the international community according to its values and rules, politically, economically, commercially, and so on, through the Bretton Woods agreement, and later by the Washington Consensus, through institutions such as the World Bank, the International Monetary Fund, international courts, etc.

China ended up very much in second place in this power structure, and outside it, except for its position in the United Nations Security Council. China, in that period, had no weight in the international community, being the 120th power in terms of GDP; moreover, it was marginalized by the West for being a communist country.

But since 1978, China began to emerge, to become the second world power, even though the power structures of the international community, dominated by the United States, have not allowed China to have its due place in those structures of international power. This is a great imbalance that the United States is trying in every way to make permanent, above all, with its strategy of “containing” China, of preventing or stopping its emergence. Hence the trade wars with tariffs; technological warfare, with the fight against Huawei and its 5G; political war with the interference of the United States in Chinese sovereign affairs, such as Hong Kong’s statutes, the recognition of Taiwan as part of the Chinese territory according to the United Nations, etc.

In a word, China has returned to its position as a first-rate world power, as it was for two thousand years, and the United States, the new power that emerged in the 20th century, won’t let it in, it does not accept it. This is not a problem that has arisen with the Trump Administration. It has been a problem with all previous Administrations, and it will continue to be, I am afraid, with the Biden Administration, although the appearance may be softened.

What is the way out of this new situation: rivalry, confrontation, or cooperation?

I do not agree with Graham T. Allison’s thesis, as brilliant as it is Anglo-Saxon, of the Thucydides trap, that is, the confrontation between the United States and China as a way out. I have very solid reasons to think that.

In the first place, China does not want confrontation, because that would go against its entire Confucian philosophy, which promotes harmony—a synthesis between opposites. In international politics, these principles mean respect for the autonomy of countries, non-interference in their internal affairs, and negotiation in order to reach agreements.

Second, China does not aspire to be a superpower, which its leaders constantly declare in international forums. The Chinese dream is not individual triumph over others—not on a personal level, nor in terms of a country. Confucian philosophy—again the voice of philosophy—defends the recognition of the individual in society, and views national or international society as the coordinator of the collective good. China, therefore, only demands recognition of its reality and that its due position in the world and in the international community be accepted.

This Confucian philosophy excludes, in principle, rivalry and confrontation, which are justified only in legitimate self-defense. Chinese dynasties were overthrown, at various times in its millennial history, for their inefficiency in defending the collective good.

For China, then, for all these reasons, the only acceptable policy to solve the existing problem in relation to the United States, the only valid strategy is that of cooperation, through dialogue. And this strategy obviously requires that both powers accept the reality of the other on an equal footing, renouncing all pedestals of superiority, whether ethnic, ideological, political, or economic.

But cooperation and dialogue need to find, previously, points of rapprochement based on the differences between two countries that belong to two different worlds. These are points of possible rapprochement or dialogue that can be found, once again, calling upon philosophy to find them, ideologically, politically, and economically. We will not reach agreements based on coincidences, but on divergences, on differences between these two worlds and by the possibilities of rapprochement, understanding or complementarity.

Ideologically, the differences are great. The United States, and the West in general, base their principles on a deistic philosophy, with references to God even in their money, the dollar, and subject to precepts and norms that issue from the divinity. Confucian philosophy is non-deistic and is subject only to norms that issue from society organized in the polis. On this ideological terrain, the differences between these two worlds can only be resolved through mutual respect for the other’s philosophy. With a possible added value for global governance that they both pursue. In this globalized world the majority of the most serious conflicts are related to different religions and the diverse way of understanding or practicing them. China can contribute to this global governance its philosophy of respect for the absolute sovereignty of the individual in society, as the ethical basis of all civilizations.

Politically, the differences are also great, between democracy and meritocracy, or between the various concepts of human rights. But dialogue will always be the great instrument of rapprochement. There can be a great consensus on social and economic human rights, even a healthy competition to fulfill them better. For example, this year China met the goal of eradicating extreme poverty. Regarding political rights, there is a great divergence, but with a wide field open for dialogue, if any superiority complex and attempts to impose on the other one’s own way of understanding them is eliminated.

Economically, the differences are due, to a large extent, to prejudices or stereotypes. On the part of the United States, McCarthyite and visceral anti-communism still prevails to a large extent, ignoring the fact that China is an advanced capitalist society, with its own socialist structures and with very positive results. On the Chinese side, its rejection of economic neoliberalism does not exclude the possibility of dialogue and discussion.

If the relationship between China and the United States is based on these philosophical principles, the risk of confrontation is eliminated. This is my thesis, and I look forward to discussing it with you. Thank you.