Planning Without Numbers,But with Quality and Structure

by Ulf Sandmark, President of the Schiller Institute in Sweden

Dec. 26—The Chinese Five Year Planning method of lining up a set of physical targets, is a planning system that has elements close to the ideas of the late American physical economist, Lyndon H. LaRouche, Jr., who invented the world’s most successful economic forecasting and planning model. LaRouche always denounced the linear thinking of bookkeepers which has dominated planning systems throughout history. Instead, he analyzed the economy for each period as a self-subsisting whole, identifying the crucial characteristics for growth in physical-economic terms. In this way, LaRouche superseded a linear metric in earlier development conceptions, projecting the economy based on the higher technological efficiency levels being discovered and implemented, and the cultural aspects of society.

LaRouche’s “boundary conditions” are not any kind of planning objectives. The concept (like others of LaRouche) is based on fluid dynamics. (Fluids = gases and liquids) The example LaRouche often used was the shockwave encountered in flight at higher and higher speeds. Familiar designs of aircraft were such that the plane would disintegrate when that shockwave was encountered. This called for new geometries for the aircraft. One could identify other boundary conditions, such as a lower bound for the survival for most forms of life in terms of temperature. Thus a boundary condition is not a goal. It is a boundary imposed by nature. LaRouche famously transferred this concept to the realm of economics. Population of an area must grow to a certain density before the lower bound is reached for a continuous rate of technical innovation. 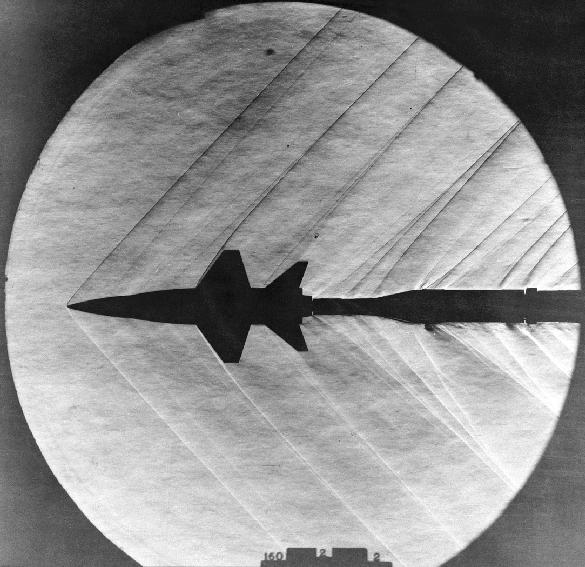 NASA
Just as the shockwaves encountered in flight (the “sound barrier”) called for new geometries in aircraft, a human population must grow to a certain density before a continuous rate of technological innovation can be achieved. Shown: shock waves generated by an X-15 model being tested in the NASA/Langley Research Center’s Supersonic Pressure Tunnel in 1962.

When using fewer numbers, planning relies more on qualitative objectives to guide a nation, especially for those parts of society necessary for a productive economy, but whose effects are not quantifiable. LaRouche’s economic planning recognizes “boundary conditions.” One such qualitative boundary condition, is the cited objective for advancing the cultural development of the population. Yet, any quantitative calculation of such an effect on production would be misleading.

Similarly, the objective of emphasizing innovation can only be incorporated into the plan with the knowledge of boundary conditions, which must be superseded, with a certain share of total production, or labor power, allocated to investments in science, research, and development. In calculating the effect of innovation with all its nonlinear effects, using quantifications based on the geometry of the former period, rapidly becomes irrelevant and is accordingly always wrong.

To be able to more rigorously guide qualitative decisions for innovation and technological improvements, LaRouche introduced the concept of “increasing energy-flux density,” signifying man’s relationship to nature, making discoveries that allow us to increase our productive powers and create new resources. This is in keeping with evolution in nature, with the evolution of more efficient forms of life, increasing the total efficiency of the biosphere, as discovered by the Russian geobiophysicist Vladimir Vernadsky.

In a planning system for “high-quality development,” it is absolutely correct, as Secretary Xin Xiangyang said at the briefing discussed in “China’s 14th Five Year Plan: Science-Driver and Culture—Not Money—Ignite Progress,” by Richard Black, in this issue of EIR, to “focus on optimizing structure” in what could be called harmonic or beautiful relations. Here, the Chinese planning for National Economic and Social Development is on track with LaRouche’s most advanced economic forecasting and planning system. 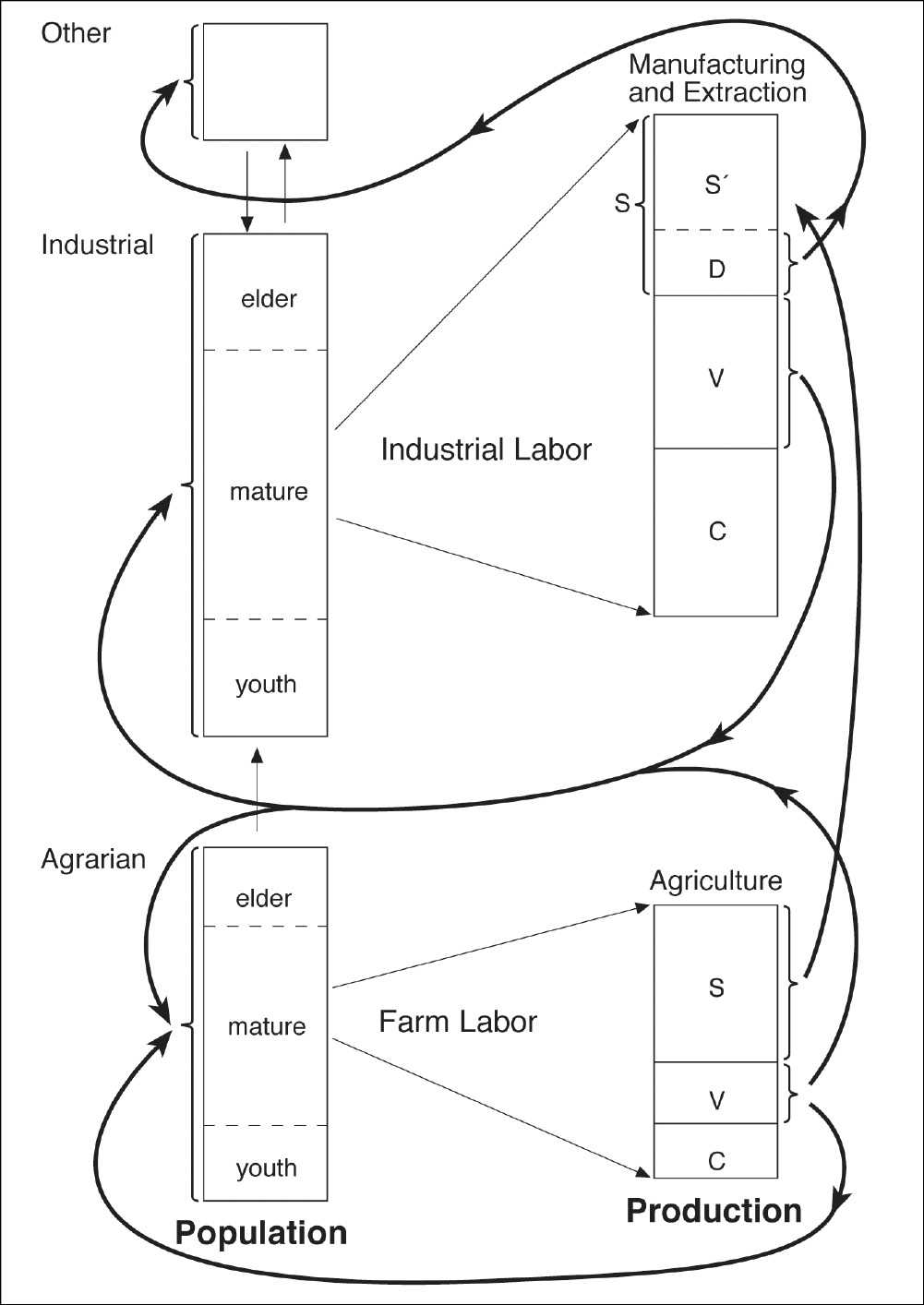 EIR
The vertical bars on the left represent the total population of households; total physical goods output is on the right. V is the portion of total physical-goods output required by productive households, including goods and infrastructure. C the total of capital goods/infrastructure required for producing physical goods. C+V is the energy of the system, consumed by operatives and industry in one economic cycle. S is surplus productive output beyond C+V. From S, must be deducted D, the overhead cost of supporting productive households. D includes medical personnel, teachers, administration, etc. Unconsumed physical output is free energy, S′/V, which must grow over time in quantity and quality. As V grows, the ratio C/V, capital intensity, must also grow—providing technological and productive power in and over nature. As C/V grows, the ratio S/(C+V), productivity, must also grow. As capital intensity grows, non-wasteful overhead expenses, D/(C+V), will grow, due to the longer periods of education required for more skilled work.

As with Li Keqiang’s physical-economic indicators, LaRouche limited his analysis to physical goods production rather than the usual GDP monetary valuations of all economic activities. He considered this most relevant as all economic activities, innovation, and culture prove their value in the advancement of physical goods production. Summarily, the LaRouche system can be described as analyzing the economy as a single physical-energy process, in which the energy of the system is measured in: (1) labor power in physical goods production, (2) machines and improvements of nature (infrastructure, land cultivation). The net surplus production is the free energy of the total economy available for investments for the next productive cycle. The ultimate objective is to increase the net surplus in relation to (1) and (2) more rapidly than in the previous cycles, which is the correlative of increasing the ratio of the free energy to the energy of the system.

In order to create the conditions for the future increase of this function, a political choice has to be made on how to invest the net surplus in labor, machinery, infrastructure, science, education, and cultural affairs, as well as other not directly productive, but necessary, activities.

This function makes it possible to compare the economic performance between the cycles, to discover the optimal (most beautiful) structure for improving the outcome of the economy and what LaRouche calls relative potential population density. Each cycle is quantified solely from its own internal geometry rather than any previous technological level.

It is the innovative changes that create mathematical discontinuities which make any linear projection erroneous. To handle that, LaRouche employed the metrics of Bernard Riemann, Professor of Mathematics in Göttingen, Germany (1826-1866), so that the different cycles could be analyzed independently as Riemannian manifolds. The economic model is thus called the LaRouche-Riemann model. (See Chapter 3 in the economic textbook by Lyndon H. LaRouche Jr. So, You Wish to Learn All About Economics? A Text on Elementary Mathematical Economics. A digital copy of the book may be purchased here.)