This article appears in the January 8, 2021 issue of Executive Intelligence Review.

Jan. 3—Members of the Schiller Institute NYC Chorus and the Bayonne, New Jersey Fire Department held a memorial ceremony on the morning of December 28, 2020 for the 64 members of Russia’s Alexandrov Ensemble—and all 18 crew members and passengers, including journalists and the beloved relief doctor, Elisaveta Glinka—who perished on December 25, 2016, when their plane crashed into the Black Sea. The accident occurred shortly after the plane took off from Sochi, Russia en route to Syria. 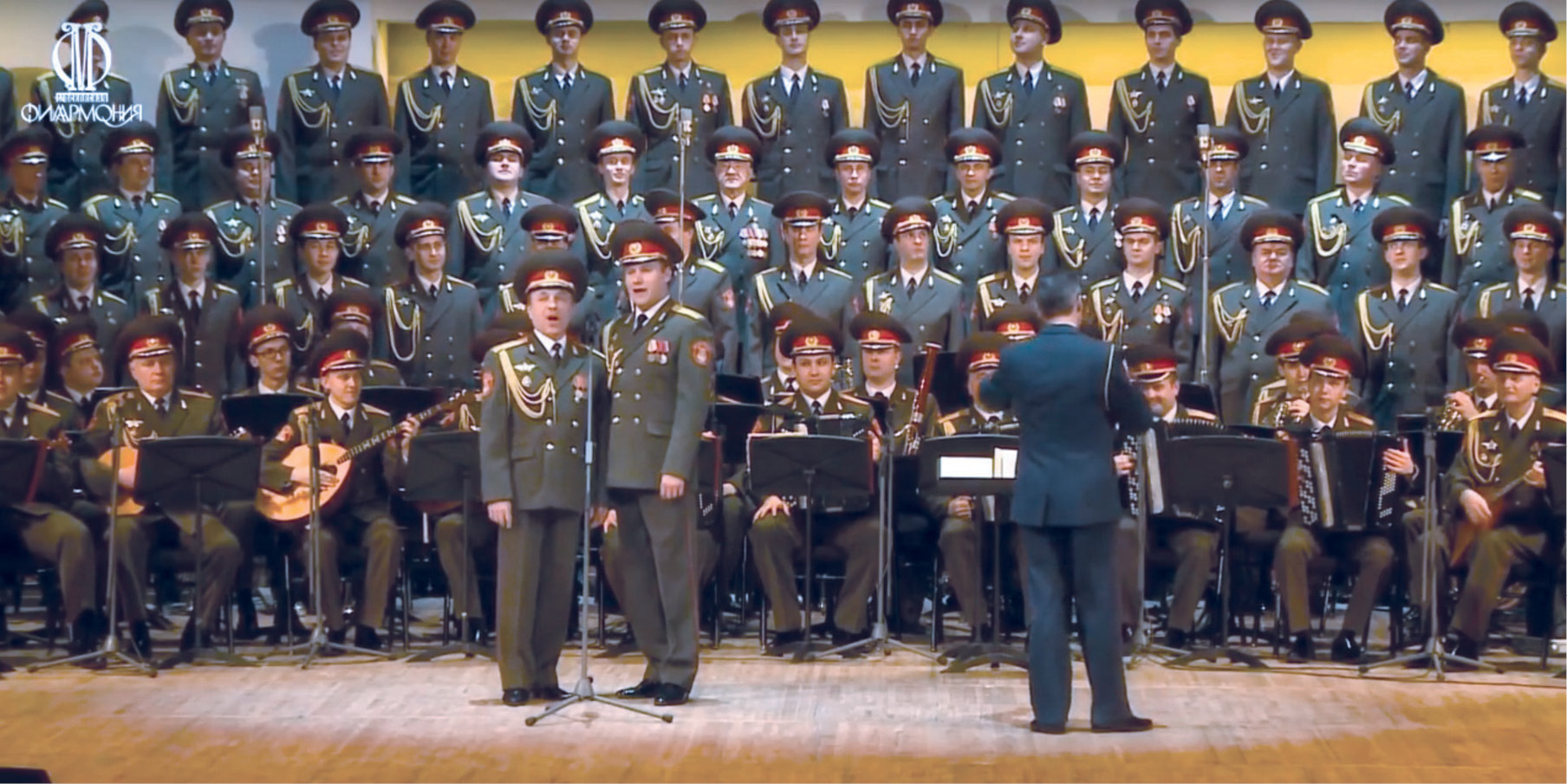 Captain Donald Haiber of the Bayonne Fire Department presided over the remembrance, which included a Department honor guard, and the singing of the national anthems of the United States and Russia by an eight-voice choir from the Schiller Institute NYC Chorus. The Alexandrov Ensemble choir, the official choir of the Russian armed forces, was formed in 1928; after the terrible loss in 2016, it was reconstituted within only months.

Because of COVID-19 restrictions, participation on December 28 was limited to only 24 people, but the ceremony took place—as have all the others since January 2017—in New Jersey’s Harbor View 9/11 Memorial Park, at the Teardrop Memorial, given to the United States by Russia as a memorial to victims of the September 11, 2001 terrorist attack. Titled, “To the Struggle Against World Terrorism,” the 10-story bronze monument is the work of sculptor Zurab Tsereteli, President of the Russian Academy of Arts. Russian President Vladimir Putin attended its groundbreaking in 2005.

After receiving the colors, Captain Haiber welcomed people to the monument, now adorned with a wreath, and spoke about 9/11. He stressed how much Russia’s gift of the Teardrop Memorial meant to the American people in that dark hour. He then introduced the three speakers, whose presentations are given here in full. 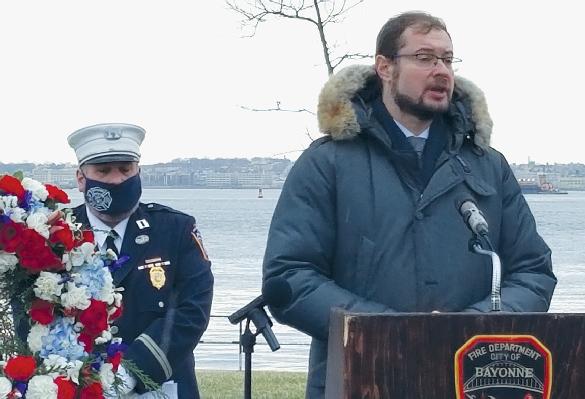 EIRNS/Suzanne Klebe
Dimitry Chumakov, Deputy Permanent Representative of the Permanent Mission of the Russian Federation to the United Nations (above), and John Sigerson, Vice President of the Schiller Institute, USA (below), speaking at the wreath-laying ceremony honoring the Alexandrov Ensemble at the Teardrop Memorial, December 28, 2020. 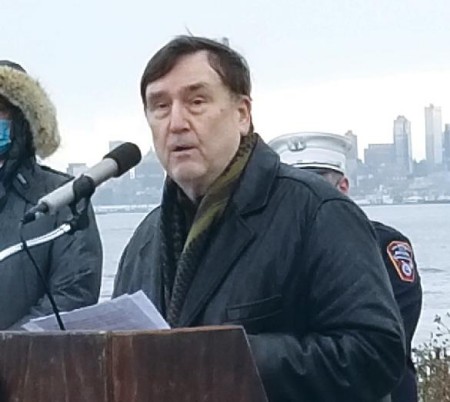 Remarks at the Memorial Wreath-Laying Ceremony in Honor of the Alexandrov Ensemble and Other Victims Who Perished at Christmas, 2016

Today is the fourth time we get together to honor the memory of the victims of a plane crash that took place in the skies over Sochi on 25 December 2016. Back then we lost almost all members of the Alexandrov Ensemble; Ms. Elizaveta Glinka, a renowned philanthropist and humanitarian worker; as well as journalists from Russia’s leading media outlets.

I would like to express our deep appreciation to the Schiller Institute and the Fire Department of Bayonne. Annual meetings like this one have become our good tradition, which makes them all the more significant. We commend the efforts of the American community to preserve the memory of those outstanding Russian musicians and luminaries in the United States. This year even the coronavirus pandemic could not stop us from gathering here.

Solidarity and mutual help are especially needed today, when humanity has faced an unprecedented threat—the COVID-19 pandemic. For the sake of our common future, peoples and states of the world need to erase all dividing lines, and channel their creative forces to articulating a joint response to this global challenge.

Russia and the United States, as two Permanent Members of the [United Nations] Security Council, bear special responsibility for sustaining global peace and security. In this context, it is of principal importance that the people of our two countries maintain most the cordial relations and promote inter-state ties at the civil society level.

This is why it widely resonates in our hearts that American people empathize with our loss and grieve along with us.

May the memory of the deceased heroes live forever. The hope and the light that they conveyed to the world will perpetuate in the souls of those who admired their talent and dedication, both in Russia and in the United States. Thank you.

‘The Best of All Possible Worlds’

by John SigersonVice-President of the Schiller Institute, USA

As we gather here today, four short, tumultuous years after the tragic loss of the gifted musicians of the Alexandrov Ensemble, along with journalists, military people, a beloved relief doctor, and crew—92 in all—on their way on a mission of mercy and assistance to the people of Syria, I’m reminded of how thankful we should be that indeed, we live in the best of all possible worlds!

But how can anyone possibly assert that we’re in the best of all possible worlds, in the face of the man-made disasters that have befallen us, especially since the horrors of September 11, 2001, which this teardrop memorializes, and since the terrible ensuing geopolitical wars, based on lies and deceit, which not only engulfed those wonderful musicians, but have thrown entire nations into chaos and misery? How can we assert this now, at the end of this annus horribilis, this awful year, bringing with it a deadly pandemic, along with starvation now threatening to snuff out the lives of 270 million of our fellow men, women, and children?

Yes, we can assert this, if we consider the following: Imagine a world where the deaths of 92 human beings, or even of 270 millions, is a good thing, something to be desired. And imagine a world where memorials such as this one, remembering and honoring those who perished, are of no consequence. Imagine a world in which friendship among nations is a fool’s errand, and where mutual suspicion and hostility is the most desirable condition among men, and among nations. 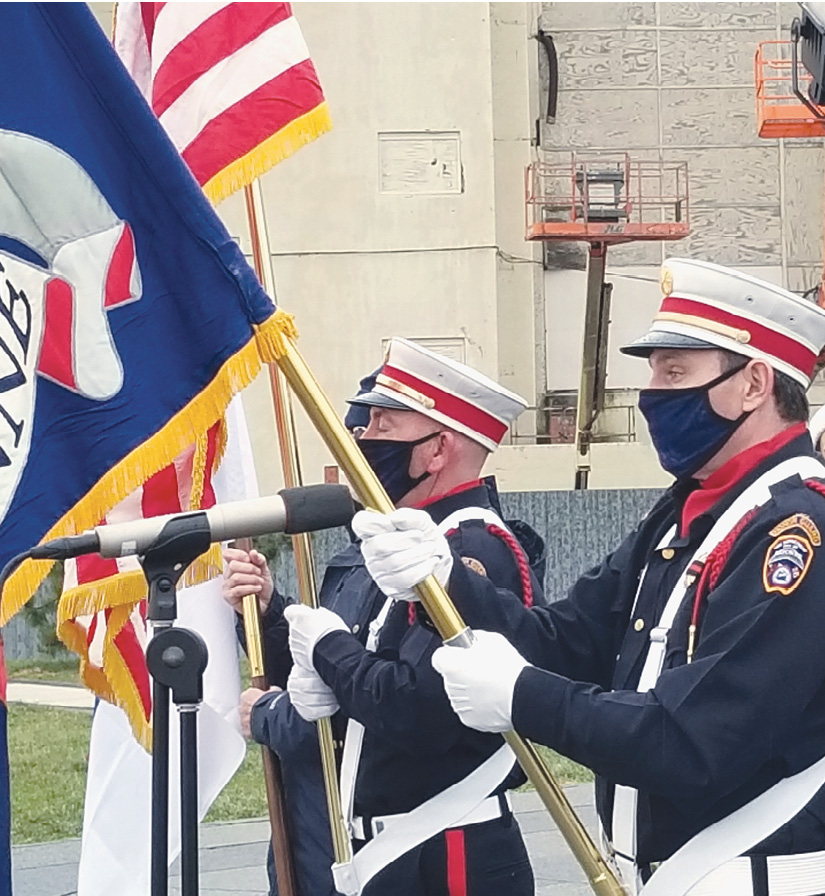 EIRNS/Suzanne Klebe
The color guard of the Bayonne, New Jersey Fire Department participated in the ceremony at the Teardrop Memorial.

Now, such a world may exist in the crippled imaginations of some misguided individuals and institutions on our planet; it is, however, scientifically, demonstrably the case, that it is not the real world. Their world is an imaginary, dead world, a bestial world; whereas the real Universe is characterized by life, by development, and by what the American Founding Fathers termed “the pursuit of happiness.” Ours is a Universe which joyfully responds whenever we have discovered a new, wonderful principle of its operations. It is also a just world, where we can be confident that meanness and ugliness will, in the grand course of history, inevitably go down to oblivion, as the German poet Friedrich Schiller wrote in his poem Nänie, set to music so beautifully by Johannes Brahms, which the Schiller Institute NYC Chorus performed at Carnegie Hall just one year ago.

Let us therefore rejoice, with all solemnity, that our tribute here to the 92 souls, and to all kindred souls who are now walking among the stars, will help to strengthen bonds of friendship, trust, and mutual assistance, not only between our two nations, Russia and the United States, but among all men and all nations of goodwill. For as Schiller also said in that same poem, even a song of lament on the lips of the beloved, is truly great and magnificent.

by Helga Zepp-LaRouchePresident of the International Schiller Institute

The world must never forget the 92 plane passengers, including the 64 heroic members of the Alexandrov Ensemble, whose tragic death occurred in a plane crash four years ago, as they were on their way to Syria to support the Russian Army, which itself was on a mission to undo the consequences of an interventionist war. Because it is the message of beauty and solidarity which the Alexandrov Ensemble stands for, which gives hope that the awful relationship which presently exists among too many nations in the world can be replaced by a better one.

The four years which have passed since the tragedy occurred, have seen an avalanche of accusations against Russia, including several years of “Russiagate,” designed only to prevent a decent relationship between the U.S. and Russia, all of which were based on lies, intrigues and manipulations. While not a shred of evidence could be produced, and many of these allegations have disappeared without any ado, that is not preventing the same circles from trying to defame Russia again and again. What is the aim of all of this?

It is high time that we use the words of the Ninth Symphony of Beethoven: “O Freunde, nicht diese Töne, laßt uns angenehmere anstimmen, und freudenvollere!”— “O friends, no more these sounds!! Let us sing more cheerful songs, more full of joy!”

Let us work in the still ongoing Beethoven Year, which has now been extended due to the COVID-19 pandemic, to elevate the relationship between the U.S. and Russia to the spirit of the memory of the Alexandrov Memorial and of that symphony, and proceed with the intention of Schiller and Beethoven expressed in the Ode to Joy: “Alle Menschen werden Brüder”—“All Men Become Brethren,” and find a way to address the common aims of mankind.