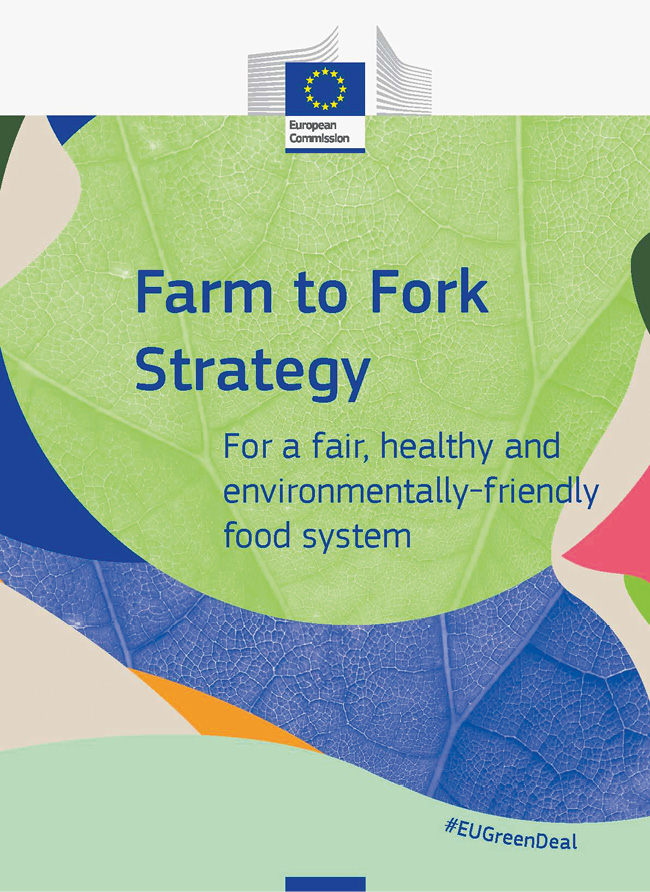 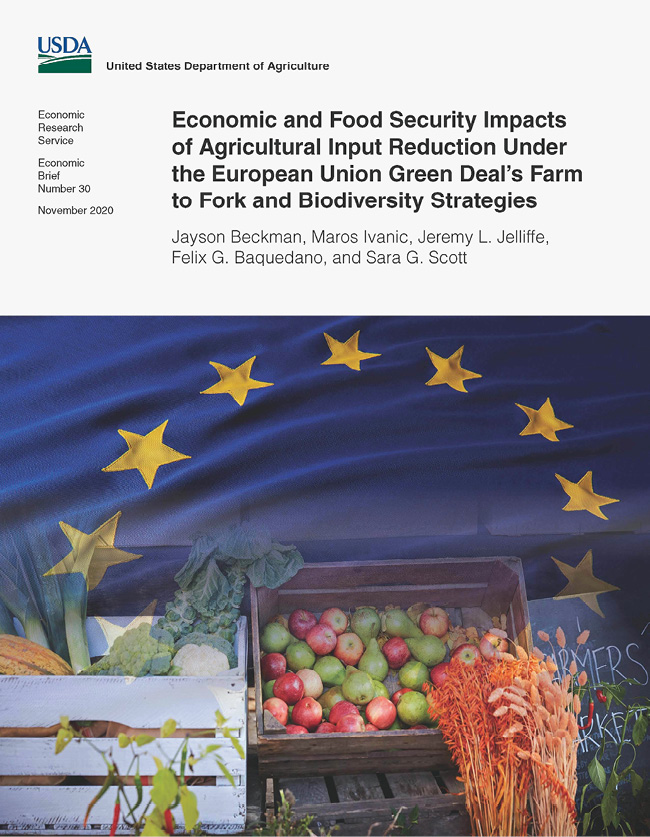 Jan. 10—The European Commission (EC), executive arm of the European Union, released its “Farm to Fork and Biodiversity Strategies” in May 2020. Those so-called strategies are the core part of its new EU Green Deal, whose consequences will directly result in significantly less food output, and more hunger and hardship for millions of people. Farmers have taken to the streets with their tractors over 2019-2020 in Germany, the Netherlands, and elsewhere to oppose the EU dictates, which technically are to be imposed nation by nation over the next 10 years, with an EC review session scheduled for 2023.

The gist of the new approach is simple: First, farmers are ordered to use less land for crops and livestock, less fertilizer, less crop-protection chemicals, and so on. This guarantees less food output. Second, for the first time ever, the purpose of agriculture laws will be changed from food production, to so-called environmental enhancement, and lessening carbon emissions. The stated EC goal is “to reconcile our food system with the needs of the planet”—not the human population! The EC set out a timeline for action, including revamping the EU-wide Common Agriculture Policy (the farm/food support law, begun in 1962), and starting up a “carbon farming initiative” in 2021.

In November, the U.S. Department of Agriculture’s Economic Research Service published a devastating analysis of the impact of the Green Deal’s Farm to Fork/Biodiversities Strategies, coming on top of the pandemic.

The USDA estimates that 185 million people would be thrown into food insecurity (lack of reliable and/or sufficient food) over 10 years—in addition to the baseline food-insecure numbers already anticipated—if these Farm to Fork/Biodiversity measures are implemented by the EU, by its trade partners, and major nations worldwide. The USDA’s methods and quantifications are reported below.

London Leads in Race to the Bottom

It goes without saying that with the pandemic now raging, international collaboration is urgent to support and expand food production, not reduce it. We are faced with a hunger pandemic as well as a virus crisis. As of year-end 2020, there are 270 million people heading into acute hunger, and another 600 million food insecure, according to the UN World Food Program. Emergency funding can save these lives, by making best use of world food stocks. At the same time, we can act to end hunger entirely. Production, and capacity to produce, must be expanded, even doubled, but certainly not cut. 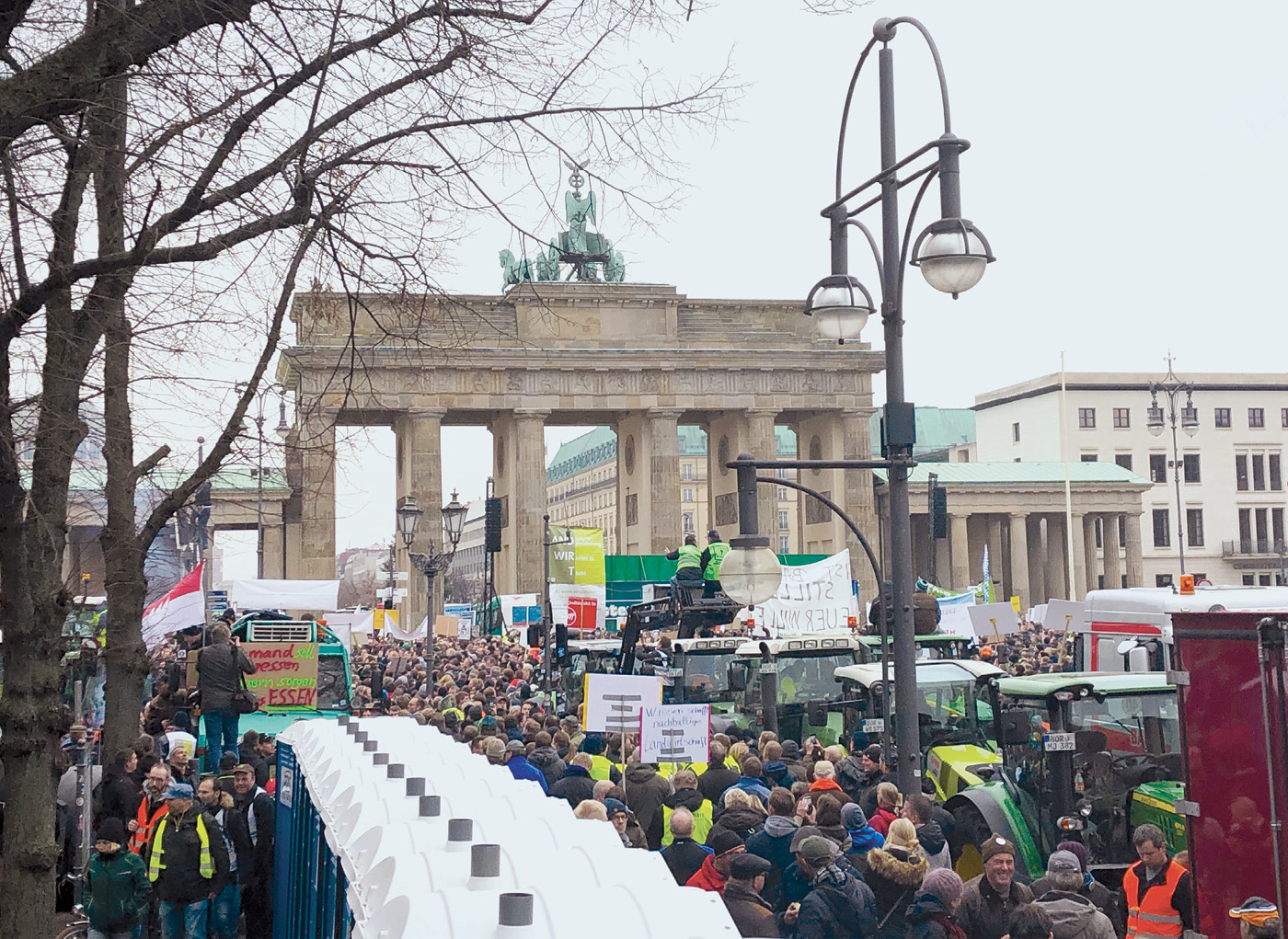 Despite this reality, and the obvious hunger implications of the EU Green Deal, Britain has taken the lead to implement the EU Farm to Fork/Biodiversity concepts, by enacting its new 7-year national “Agriculture Law” in November 2020. The law offers financial inducements to farmers, to put the environment above food. This is an historic, and terrible shift. The UK government states that “farmers and land managers in England will be rewarded in the future with public money for ‘public goods’—such as better air and water quality, thriving wildlife….” to aid in achieving “net zero emissions by 2050.”

BREXIT technically may have put the UK out of the EU, but over and above both of them, and above almost everywhere except China and Russia, economic policies are still run by the London/Wall Street-centered world monetarist system of mega-banks and mega-transnationals, which are now pushing “green finance” to enforce downgrades in farming, food consumption, energy, and all necessities of life. Their goal is to siphon off whatever they can into their chosen control networks, to prop up their otherwise collapsing system.

These figures and agencies are not “confused.” They know full well that green finance, and their fake save-the-environment movement, means mass depopulation. The World Economic Forum will officially roll out its “Great Reset” master plan for green finance and killer economic policies, and for replacing sovereign governments with mega-bankers’ “governance” at their week-long event January 25-29, titled, “The Davos Agenda.”

USDA: Farm Inputs Will Be Cut

The title of the U.S. Department of Agriculture’s Economic Research Service report is, “Economic and Food Security Impacts of the European Union Green Deal’s Farm to Fork and Biodiversity Strategies.” It is 52 pages long, with full-page, detailed data tables provided, as well as charts.

As reported by the USDA, the agricultural input reductions called for in the EC Farm to Fork/Biodiveristy Strategies—called “Strategies” in their report and in this article—are: Land in agriculture, cut by 10%. Fertilizer use, cut by 20%. Pesticide use, cut by 50%. Anti-microbials—meaning anti-biotics and other medications—cut for livestock by 50%.

The justification for these cuts is given in various ways in the EC “Strategies” plan, which calls for a more “sustainable” way to produce food, that provides “stewardship of the environment.” The false premise here is that technology and scientific advance ruin the environment. Growth and population must be limited. This is a see-through rehash of the old Parson Malthus (1766-1834) claim that occasional depopulation is necessary to balance “nature” and people; Malthus worked for the British East India Company.

The EC speaks of achieving by 2030, a “fair, healthy, and environmentally friendly food system.” Whatever the rhetoric, major agro-food cartels (Unilever, Nestlé, Walmart, Cargill, JBS, etc.) are already in motion against governments and farmers in many nations, consolidating extreme control, and issuing decrees—green or not—about production. In India, for example, thousands of farmers have been protesting in the capital for two months.

Theoretically, the implied declines in food production from implementing the Strategies could be offset by other factors, such as higher-yielding seeds, adding more labor, or cushioning the impact of lowered output by decreasing waste in the food chain. These mitigating factors were not included in the USDA study, as they are not spelled out in the EU Strategies plans. 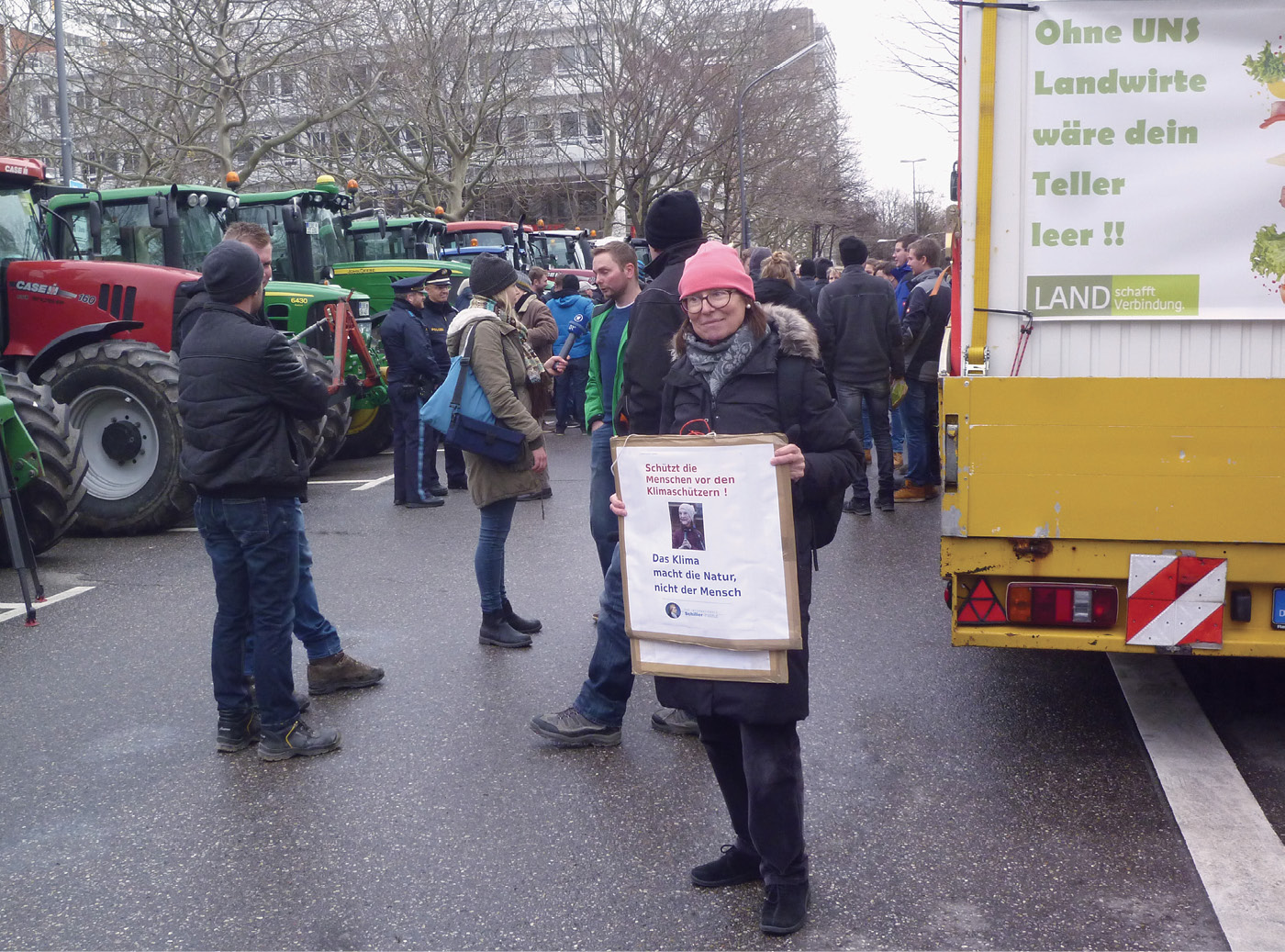 Schiller Institute/Werner Zuse
A demonstration sponsored by Land schafft Verbindung at the Ecology Ministry of Bavaria in Munich, Germany on March 5, 2020. The Schiller Institute organizer’s sign reads: “Protect the people from the climate protectors!” and “Climate makes nature, not people.”

The USDA identified 20 food commodities (grains, oil seeds, meats, dairy, vegetables, fruits, nuts, etc.), whose EU production would be lowered by the proposed cuts in inputs, and cranked through the results, which showed the size of decreases. Adding to this picture, the analysis took into account what effect the reduced EU output would have outside of the EU, among close trading partners, and in the world at large.

For example, in some cases, nations exporting to the EU would be induced to produce more corn. In other cases, nations importing wheat from the EU, would be expected to shift to other source nations for their imports. These inter-contingent changes for other parts of the world were estimated by the USDA, which has an in-depth database.

Finally, in the design of this comprehensive analysis, the USDA took into account: What if more of the world adopted the Green Deal Farm-to-Fork/Biodiversity Strategies’ cuts to inputs, beyond the EU itself? The study set up three geographic scenarios: (1) EU-Only Scenario, already described. (2) Middle Scenario, comprising the EU and the nations which depend on farm commodity exports to the EU. This scenario presumes that the EU could put trade restrictions on any country refusing to adopt its Green Deal Strategies. (3) Global Scenario. This last category does not have all world nations, but it has the 76 major nations in terms of population and food consumption and trade, for which the USDA has a thorough data set.

These three scenarios are realistic because the European Commission has stated its intent to spread its Green Deal, saying it will “support the global transition to sustainable agri-food systems through its trade policies and international cooperation instruments.”

The results of the EU Green Deal for agriculture are a disaster. The report gives detailed data on the rise in prices to consumers, the lack of a price benefit to farmers, and the huge declines and shocks in changes of production that the mandatory input restrictions mean. In the EU itself, under the EU-Only Scenario, agriculture output drops 12% over all; and worldwide production drops 1%. Other nations make up somewhat for the EU cuts. By category, EU oilseed production drops by 61%, wheat by 49%, and certain other crops by 44% (including all kinds, from herbs to cut flowers). The impact on each crop varies. With wheat, for example, land area and fertilizer account for a large proportion of output, so cutting these inputs will have a big impact.

These kinds of details and many others are provided for the other two scenarios, and the report features data tables for countries, food items, and impacts. But the import of the analysis is conveyed in the simple point that millions of people are not supposed to have food in this Green Deal madness. 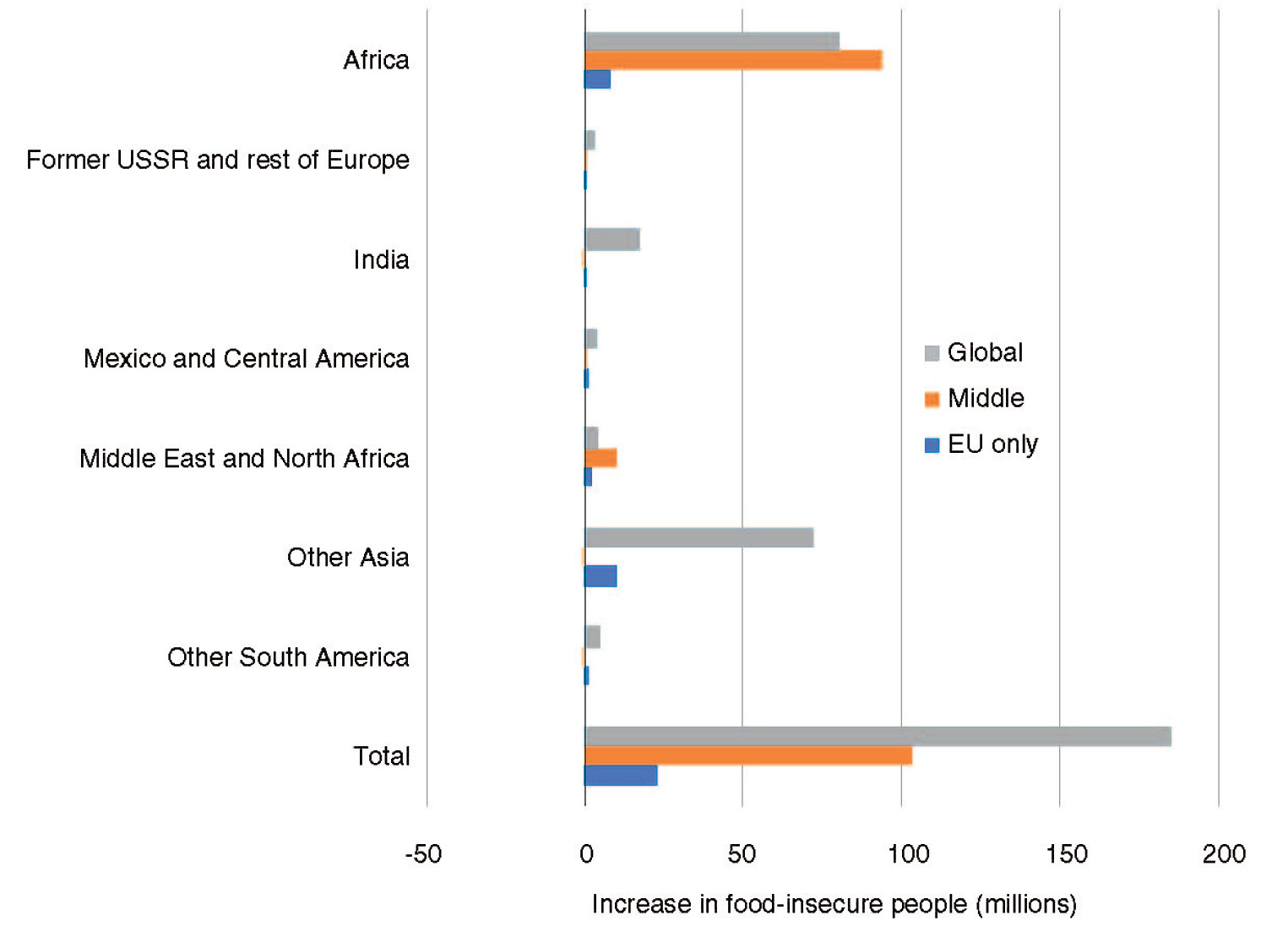 Note: EU-only is defined as only the European Union (EU) implementing the Strategies; in the middle scenario, trade partners who depend on food and agricultural exports to the EU also adopt the Strategies; and global is defined as all regions adopting the Strategies.
Source: USDA, Economic Research Service calculations using the International Food Security Assessment Model.
Shown are the net millions of additional food insecure people which would result from implementing the EC Green Deal Farm-to-Fork/Biodiversity Strategies to limit agriculture inputs by 2030, in three scenarios for which the U.S. Department of Agriculture’s Economic Research Service did simulations. (1) in the EU-only scenario (blue) the net number of people made food insecure worldwide is 22 million, mostly in Africa and Asia; (2) in the Middle scenario, if the Green Deal prevails in the EU and its major trading partners (orange), the net number of people made food insecure worldwide is 103 million; (3) in the Global scenario (grey), a net increase of 185 million people would be made food insecure (80 million in Africa, 72 million in Asia, and 33 million elsewhere), if the Green Deal is imposed in the EU and 76 other major nations.

The chart reproduced here from the study (see Figure 1), focuses on the net increase in food-insecure people by 2030—over and above a baseline otherwise projected—for the three scenarios. Moreover, keep in mind, this is a very linear, understated picture, without any more human or animal epidemics, plant diseases, weather disasters, or major crop failures, etc. Under the EU-only Scenario, the cutbacks in agriculture inputs and production result in a likelihood of 22 million more food insecure people worldwide than otherwise expected. This includes 8 million in Africa and 10 million in Asia. Under the Middle Scenario, the number of additional food insecure people climbs to 103 million, who are mostly in Africa and Southwest Asia.

On the Global Scenario, the USDA report states, “When the Strategies are adopted at the global level, the number of food insecure people increases to 185 million…. The increase in food insecurity is spread across all regions, but Africa (80 million) and other Asia (72 million) continue to be the most impacted. This is because they could experience the largest increase in commodity prices and the largest GDP declines.”