An Interview with Dr. Luo Delong,Director for ITER China The following interview was conducted on February 27, 2018, at the Big Science Business Forum 2018 in Copenhagen, by Michelle Rasmussen of EIR Copenhagen. It was published in Europe at that time, but never published in the United States. The video of the interview can be seen here, and an interview with the Communications Director of Fusion For Energy, the European section of ITER, can be seen here.

EIR: Hello. We’re reporting from the Big Science Business Forum 2018 in Copenhagen, Denmark. I’m very happy that Dr. Luo Delong, who is China’s director for the International Thermonuclear Experimental Reactor (ITER China), has been kind enough to speak to us about the Chinese fusion energy program. ORNL
ITER, the world’s largest experimental fusion machine, under construction in Cadarache, France, as of December 28, 2018.

Luo: Yes, and I am very pleased to be here, and to talk about the Chinese program on fusion, and also, in the long term, to try to bring fusion into energy production. This is our ultimate goal. Currently, we are participating in ITER. This is a very important international project, we believe. This is why we are here, to participate in these kinds of mega-science programs all over the world, particularly in Europe. And ITER is beyond that, since it is a larger cooperation, among the Asian countries, the European countries and also the North American countries. It’s a very crucial step for fusion energy—to really be commercially used in the future. This is the kind of test reactor which is trying to determine the feasibility, in terms of science and engineering, and also trying to make it possible to test a burning plasma, as well as the deuterium and tritium fuel. This is a very important step for the realization of fusion energy in the future.

China is one of the seven partners in the ITER program. We are providing 10% of the contributions, mainly in-kind contributions, and also some cash contributions, as is common to all parties in the ITER organization. We are very much involved especially in the magnets part, and also the inner wall—the first wall, the shield blanket—which is within the tokamak, in the plasma-facing components. It’s the inner part of the tokamak. We are also heavily involved in the power supply, because the magnets need very strong power to make a strong magnet. These are the main components we are providing from China. We also have smaller ones, like the gas injection, and also, glow discharge cleaning, and the diagnostics.

EIR: What is gas injection?

Luo: Gas injection is for the fuel, because we need to input fuel into the tokamak. The gas injection inputs the tritium, as well as other important gases, which we need for the plasma. This is the fuel cycle system, which we are involved in.

The Importance of Fusion to China’s Future

EIR: Why does China think that fusion is so important to be involved in—financing and providing materials to? How does fusion fit into the idea of the energy future of China?

Luo: In China, we have very big energy needs for today, tomorrow, and even for the future tomorrows. We have very, very, fast growing energy needs, because of the fast development of the economy. Currently, we already import energy. We don’t have enough now, and I think it is very important that we develop new technologies. Currently, we are trying to use sustainable energy as much as possible, because we have been using coal as the main fuel for energy. But, in the long run, we also need to develop new technologies like wind, like solar energy. But nuclear energy is one of the important sectors, which we believe will contribute much to the energy market in China. Currently, we have fission reactor power plants, and we are also trying to increase the percentage of nuclear fission energy in our energy profile. But, in the meantime, we need to go beyond that to fusion. The nuclear energy strategy for China is currently the current generation of power plants, and then we go to the fourth generation as the second step, and then, the third step is fusion energy.

We believe that will be a kind of final solution for energy, because there is abundant fuel. We get deuterium from seawater, and there are very abundant resources. We also try to produce tritium from the fusion reaction, and then we have all the fuel available for a very, very, long time into the future.

And third, it is environment friendly. Fusion does not produce any greenhouse gases, no dust pollution, and the only thing going out is helium, so it’s also safe. As for radioactivity, there is no high radioactive waste. Countering pollution, and these three major features, make us believe, that fusion would be the optimal energy source in the future. The Chinese government believes that we have big energy needs, and we think that safe and abundant energy would it be a very good solution. That’s fusion. Fusion as a Science Driver

EIR: The other thing is that your President, Xi Jinping, has been especially emphasizing innovation as a driver for the economy, and for the society. In our organization, we have also spoken about a science driver, that if you produce five watts of energy with inefficient energy, like a solar panel, or if you produce five watts with a fusion process, because you’re at a higher technological level, that enables you to do many more things. You’re raising the whole platform, technological and scientific platform, of the whole economy, and the skill level of the population.

Luo: Yes. I’m not really in a position to blame solar energy, but I believe fusion energy will produce much abundant energy, with limited fuel, because the fuel is very light, and a small quantity of fuel can produce a big quantity of energy. That kind of efficiency would be a good argument for fusion. And this is why, at the beginning of the century, we joined ITER, in 2003. At that time, the economy of China was still at a much lower level than what we have today. But still, China chose to join ITER, a very expensive project, but, we believe this is important for the long-run energy solution. And also this—you’re right—that we are trying to promote innovation. I think this is one of the ways for the Chinese scientists to be innovative, and to join the international innovation projects. I think it’s another reason to work on the science and technology development and innovation development in China.

EIR: We were speaking before this interview that China is going to be graduating, over a period of time, about 2,000 fusion scientists, which is, I think, larger than most other nations.

Luo: Yes, and because in the past—we started fusion research very early, around the 50s and the 60s in the last century, but over a period of time, because this is a very expensive, very long objective, China, more or less, stopped government financing of the fusion studies for a while. So, the team had been dismissed, and then it’s really difficult to gather them back. Only when we joined ITER, people saw new opportunities, because this is a big project. At this time, we needed a lot of new people. Because of the stop of around ten years, I think, we did not have enough scientists and engineers in this field, so we needed to train new young people. On the one side, for the current project, and also, because this is a long-term project. We need the young and future generations to maintain the developments in the future.

The young people come, and we have the kind of expertise in the universities, and the research institutes, to provide training for these young people. Gradually, we have a bigger and bigger team in this area. Why 2,000 people? Because we believe that we need the people from China for ITER on the one side, and also, we need to develop our own programs locally. This is why we need a big team. 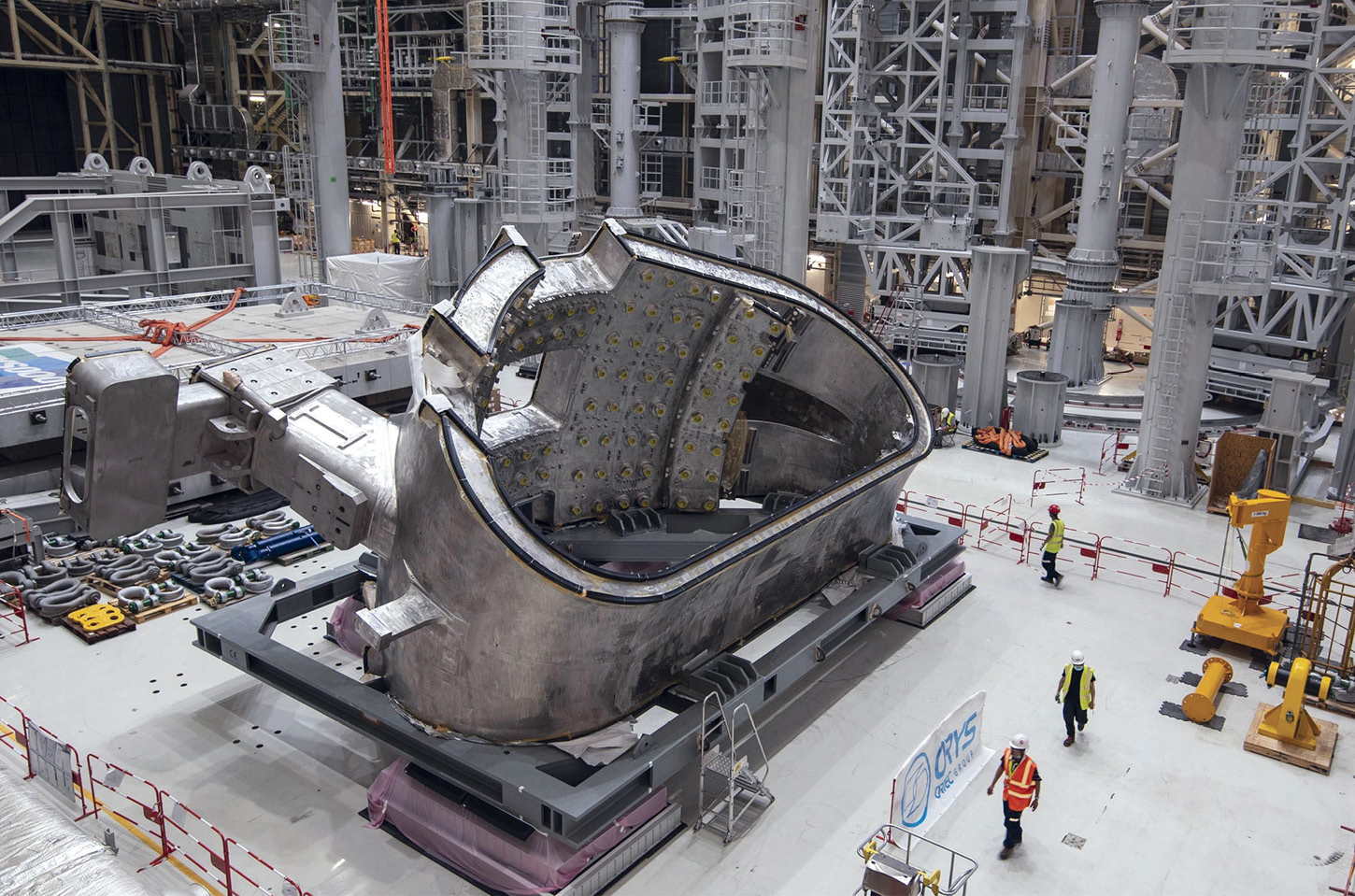 ITER
One of ITER’s nine toroidal plasma chamber units, shown on arrival at the assembly hall in September 2020. The fusion plasma will be magnetically confined in the assembled chamber.

EIR: One of the local programs, maybe you can comment on it, is the idea of a hybrid fission-fusion reactor?

Luo: Yes. Currently, the mainstream research and the development activities are concentrated on pure fusion. Because the fusion people believe that if we adopt a hybrid reactor we will not avoid the adverse side of the fission, because fission has some safety issues we all know about in Japan, in Russia, and if we use hybrid, we can probably hardly prevent those kinds of events or accidents.

The current hybrid concept is trying to avoid the problems of fission. It’s also another development, but that is still at a very early stage. It’s not really developed as much as what ITER has been doing now—already at the stage of a test reactor at the experimental reactor stage. So, some development is still going on for hybrid, I know, in Russia, and also in China, but that’s not the mainstream for fusion energy development, as I understand it.

EIR: There is a Chinese tokamak.

EIR: Just this last question. How do you see the beneficial effect of the cooperation between big science and the domestic Chinese industries—that you have industries that are suppliers to this big science effort, which has been the theme of this conference? How is that working in China?

Luo: I think that this is very important. It’s a kind of win-win situation, because the big science circle needs very strong support from industry, especially during the construction phase. We are pioneering in the field, and lots of components are frontier type technology. So all those technologies will really finally need industrial production, to enable the facilities to be erected. Otherwise, the scientists cannot really make all those components, but they have the ideas, and they produce innovative ideas, and are trying to use the cutting-edge technologies, and then, the industries will realize those. So this is one way, that the scientists will get the facilities.

In the meantime, the industries, from such kind of innovation, themselves grow. They operate their technology, and also, they are more involved in the cutting edge area, which is helping them to really upgrade their competitiveness in their own fields, and in the market, as well. So, I think it’s really important, and I think Chinese industry also got good benefits from the cooperation with the mega-science project, particularly ITER. Some of the industries develop new technologies, which were really not readily available in China before. So, it’s good for the industry, and also good for the country. This is a good argument, not only for the scientists, but also for the government to provide the funding for the mega-science projects. EIR: Is there anything else you would like to say?

EIR: What is that?

Luo: European XFEL is here at the Big Science Business Forum. They have experts here, and they gave a report during the presentation this morning. It’s very strong, very brilliant actually, for scientific research. Very, very important facilities for very pure science research. So, it’s another project I, myself, am currently involved in. [European XFEL is an X-ray research laser facility recently inaugurated in Hamburg, Germany.]

EIR: I thank you very much Luo Delong. It’s been very informative.

Luo: Thank you very much, Michelle.