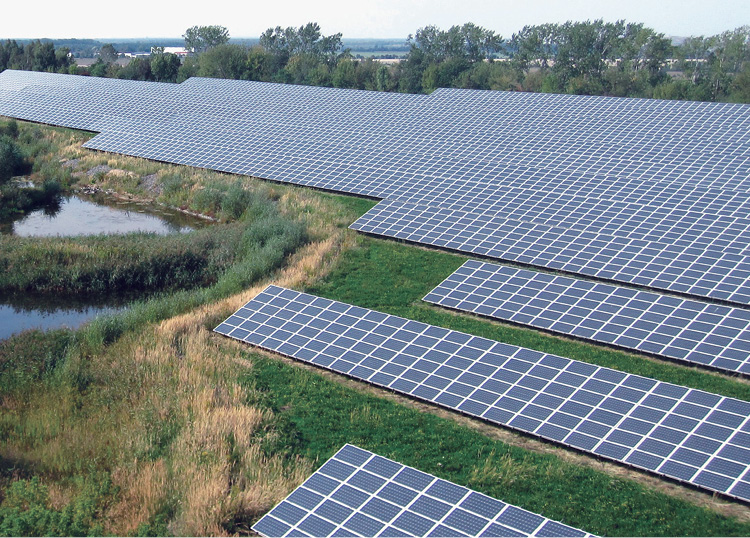 Jan. 17—On Friday, January 8, all of Europe received a wakeup call at 2:05 p.m., when its power grid barely escaped a general blackout. An imminent catastrophe was avoided because the all-European energy distribution system reacted promptly, by bridging emerging gaps with surplus electricity tapped from several other European countries, as well as by temporarily switching off the power supply (contracted load shedding) to Italy and France. Those actions prevented the frequency of the current, designed to be 50 cycles per second (hertz), from dropping below the critical mark of 49.8 hertz, which would have forced a large part of the system and the electricity supply to tens of millions of households to be switched off.

Such an event had happened last on November 4, 2006, affecting 10 million households. This time, the trigger for the near-blackout was said to have been Romania, where the power input to the grid fell short substantially. The next time it happens, the trigger will most likely be Germany, whose government is obsessed with walking out of all fossil energy sources, and out of nuclear power, and making the entire country and its economy dependent on “renewables” like solar and wind power and biomass. The German government had already reached half of its target last year, when “renewables” had for the first time a share of more than 50% of the national power supply. The final target of 100% is to be reached in 2040.

The German march into the era of solar, wind, and biomass has repeatedly caused problems in the calculability of power supplies: Whenever there is not enough input provided by wind or sun, reserve capacities in the oil, gas, and coal sector are tapped to bridge the gap; whenever there is a surplus provided by wind and sun, capacities in the three fossil energy sectors are switched off. And, whenever the gap is too large to be bridged within a short time, Germany imports power from its neighbors. Ironically, these are usually imports which Germany considers “dirty” electricity, because it is produced from coal (Poland, Czechia) and nuclear (France, Czechia) in most cases.

Experts warn that this system of imports is fragile, because Germany’s neighbors will not be able to guarantee sufficient power volumes to Germany, the needs of which will massively increase after its final exit from nuclear power at the end of 2022. Already this year Germany plans to shut down three out of the remaining six nuclear reactors—that alone will take 6% of the national power capacity off the grid. And that will not only cause problems for Germany; because Germany’s industrial economy is the biggest in Europe, it will hit all of Europe with rising imbalances in the continental distribution system. 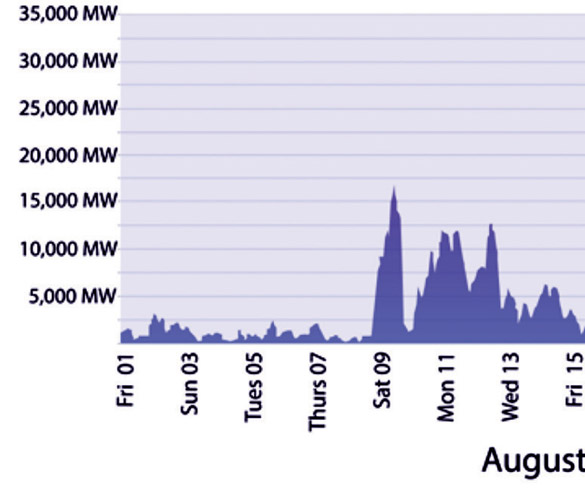 Image adapted from that used by Wolfgang Müller at the 2015 International Conference on Climate Change.

A September 2015 EIR Special Report, “ ‘Global Warming’ Scare Is Population Reduction, Not Science,” demonstrated how the vastly increased frequency of irregular starts and stops of “renewable” power units, and of the reliable natural gas and nuclear power units which have to back up the “renewables,” created problems for an electrical delivery grid which depends upon reliable supplies of power. The gross fluctuations of “renewable” power sources were shown in a chart of wind power electricity generation, day-to-day, in August 2014. (See Figure 1.)

The report showed that, Image adapted from that used by Wolfgang Müller at the 2015 International Conference on Climate Change.

The system has so far prevented bigger catastrophes in the energy supply of Europe, but it is not stable. For instance, Germany is no longer able to contribute its national share to the system: Its own electricity exports fell by 11.6% in 2020, while at the same time Germany had to import 38.8% more from European neighbors than in 2019. During summer 2020, France was unable to export enough surplus electricity to its neighbor Germany—the biggest traditional foreign client of the French nuclear power sector—but was itself forced to import from Spain, which again had to import from Morocco. This shows that there are definite limits to what the other European nations can do to keep Germany’s industry going.

Visions of a Green Finance Bubble

It is just striking that German “renewables” radicals are proposing to build giant solar panel parks in Morocco to generate power to be imported by Germany. Such proposals send extra adrenaline into the veins of Green Finance fanatics who are getting euphoric about the several hundred billion euros to be invested in the Moroccan scheme, which would create even worse disasters than the present policies of Germany.

The present policy is a disaster already: After all, 2020 was the year that saw CO2 emissions in Germany drop by 15%—but that was owing to the shutdown of large parts of industry affected by the pandemic, not to the fact that 2020 was the first year in which renewables generated more than the three fossil sources—oil, coal and gas—combined: 183 terawatts against 178 terawatts respectively. As has been mentioned above, 2020 also was the year in which Germany had to import more power than ever before.

No doubts can remain that the transformation of the German power supply into a “green” one is a failure. It is an expensive failure, because the funding of these green energy sources, which was €27.5 billion in 2019, increased to €30.9 billion last year. The funding comes under the EEG (the Renewable Energy Sources Act), which reimburses the producers of solar and wind power not only for production costs but also for losses caused by not finding enough clients.

Even though the electricity generated in Germany by solar, wind, and biomass was 4% greater in 2020 than in 2019, income generated by production of electricity from renewables in 2020 was €6.4 billion lower than in 2019. The pandemic-related shutdown of industry caused lower effective demand for power, and since electricity cannot be stored, when renewables are producing excess, either it must be exported to Germany’s neighbors or, if those neighbors cannot use it, the generators have to trip off, or other grid interventions made, for which German providers have to pay. In 2020, the cost was €579 million.

The absurdities of the German energy policy, exacerbated by the European Commission’s “Green Deal,” cannot be tolerated by the other nations of Europe which have their own national interests. Many of Germany’s neighbors are opting for increased use of nuclear power; six of them even forced the European Commission to recognize the atom as a low-emission energy source in its overall green energy agenda passed at the end of 2020. Germany’s eastern neighbor Poland wants to build up to 11 nuclear reactors by 2040. In its program for the early national elections in the country this spring, the governing VVD party of the Netherlands will call for the construction of 10 nuclear reactors to be built over the next two decades. Czechia, Slovakia, Romania, Hungary, Bulgaria, and Finland are committed to build new reactors.

Even France, which was host to the 2015 global Climate Agreement of Paris, and unfortunately wants to reduce the generation of power produced from nuclear reactors from 75% of the national output today, to 50% by 2040, remains committed to nuclear power, in principle. President Emmanuel Macron, who inherited this reduction target from the previous presidency, reiterated in remarks December 12 that nuclear power is indispensable for France and will have a strong future there. And 110 Polish scientists and energy activists have published an open letter calling on the German government to drop its “nuclear exit” target and let the remaining six reactors run for the time being beyond the end of 2022.

There is still time, though not much, for Germany to reverse its march into the “green energy” quagmire and secure the power supply for its industry and population. This requires not only keeping the remaining nuclear fission reactors running, but building new ones and entering the era of nuclear fusion.

The LaRouche movement’s BüSo party will promote this program in the national parliamentary election campaign in September 2021. The BüSo campaign will spark a national debate on a re-entry to nuclear power in Germany.