The following is an edited transcript of the presentation by Madison Hirst to Panel 4, “A Human Future for Youth: A Beethoven-Driven Renaissance of Classical Culture,” of the Schiller Institute’s December 12-13 conference, “The World After the U.S. Election: Creating a World Based on Reason.” 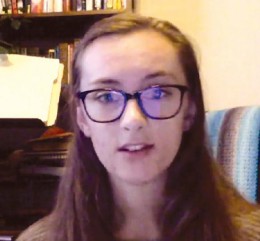 Firms that align their business models to the transition to a net zero world [no carbon fuels or chemicals] will be rewarded handsomely. Those that fail to adapt will cease to exist.

What a do-or-die statement Mark Carney made in the 2019 Climate Action Summit in New York! One may wonder though, how would the then Governor of the Bank of England come off making such demands on a global scale?

That had been made possible a month before in Jackson Hole, Wyoming at the Federal Reserve Symposium, where 120 bankers, economists, and other elitists, cooked up a grand scheme: financial regime change. It’s not a particularly new idea, but many people still fall for the same tricks, so why change? Our world sees too much regime change through other methods, but how would a regime change take place with the use of finances? And used to what end? The key to said elitists’ problem of control, was a rather tiny thing that had the potential to balloon into a messy problem: digital currency. Specifically, digital currency to replace the dollar as the world’s reserve currency.

It hardly seems such a problem at first glance. Don’t most people use Apple Pay or some variant nowadays? But those are far and away different, for those kinds of electronic transactions, they are still using the dollar. Imagine for a moment that there was a second currency, used on a global scale, and this currency had no physical attachments. Again, at first glance this doesn’t seem like much of a problem. A main problem is that it eliminates the usage of a commercial bank.

Most people—and many bankers—couldn’t tell you the purpose of a commercial bank versus an investment bank. But as the 1933 Glass-Steagall Act will tell you, the difference lies in where the banks are allowed to invest their depositors’ money. For the investment banks, they are allowed to go into the Wall Street speculatives and derivatives, and since the deregulation, at the expense of the people. The opposite is true of the commercial banks. They are barred from dealing in Wall Street gambling, and must invest the money entrusted to them into the productive economy locally. 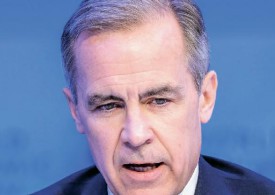 WEF
Mark Carney, former Governor of the Bank of England: Businesses that fail to adapt to net zero carbon emissions will cease to exist.

Terms tend to lose their meaning when most of the population has not been educated even in the basics of real economics (instead of what many today would tell you is “economics”). When one speaks of the productive economy, what they are talking about is the jobs and services that make the country run. This is things like manufacturing, agriculture, R&D, etc., versus things like, ever-changing clothing styles or entertainment. Not that those things are bad per se, just that they are too prominent in today’s society.

While an investment bank would not necessarily be investing depositors’ money into Wall Street or funneling it into a hedge fund, it would probably not go into the businesses or local enterprises, either. The ability of a commercial bank to invest in the local economy is termed by the investment banks and others who wish to get rid of them, “fractional reserve banking.” (Which makes everything more clear and unambiguous.)

There are very compelling reasons for central banks to issue their own digital currencies…. Most importantly, if you take the physical cash out of the system, you can enforce negative interest rates.

Negative interest rates—the sure fire way to ruin any economy.

All throughout this explanation, some may have had the sneaking itch, “What is this currency’s value created by?” The whim of some bigwig in a three-piece suit? What if said suit starts to think that the value of the currency should be less or more—and remember, this is a global currency we are talking about—what restrictions would they have from say, raising it exponentially just in time for themselves or an associate to purchase an exponentially expensive enterprise, or lower it to dirt cheap, funnel some amount into a hedge fund, and raise it again. The point being made is that having a currency that has no physical attachments would mean that anyone they want could have a blank check.

CC/AG Gymnasium Melle
Burkhard Balz, a member of the German central bank’s committee on Central Bank Digital Currencies, has suggested that holders of proposed digital euros must either spend them or lose them.

What does this mean for a nation whose people are being issued money in a state of “emergency” (how broad its definition, is not stated)—money that has the variable of changing its value at the flip of a coin, and they have no control over how it is regulated. And not to mention, as Burkhard Balz—a member of the German central bank’s committee on CBCDs (Central Bank Digital Currencies)— suggested on October 20:

We might need to consider introducing tools to ensure that a potential digital euro would be mainly used as a means of payment but not as a store value. [I.e., think again of trying to save in this currency.] One option to be investigated would be to allow users to hold digital euros only up to a threshold at any given time.

That is, use it in a certain period, or watch it go up in smoke.

The answer is that having a currency such as this is a tool for control. To what end? That had also been decided at the Jackson Hole Symposium. Pushing the Green Agenda, as Mark Carney so put it at the beginning. No fossil fuels by 2030 or be eliminated. All industries that use high heat are out—too much greenhouse gases. All power that is not wind, solar, or maybe (if you’re lucky) hydro—too much carbon. (But nuclear is bad for other reasons.) Meat is also out because cows fart too much and that is way too much methane.

But who needs a replacement technology when austerity is telling you that the few things that make your country function, are killing the planet? And that if you were to get rid of them in the time-frame they are demanding would mean an even worse situation than the one we face today. But who cares about the lives of people, when a banker on Wall Street can make a dime betting that it’s going to rain tomorrow?

The severity of the situation may not need to be stated. The Green Fascism that lingers on the horizon, slowly is taking root—while many choose to look away, or others ignorantly push policy that would lead to the death of billions. Famine, Disease … for many in America we knew what these words meant, but had never dreamed that we would face these challenges in our lifetimes, that the current period will be the deciding factor in whether Imperialism will reign as not seen since notably the American revolution, but [especially since] the end of World War II, with all of the horrors that entailed.