What Is To Become of Our Republic? Jan. 18—With the American republic in its most aggravated state of social division in many decades, and in both a viral pandemic and underlying economic decline, the Schiller Institute held an event today on the holiday honoring Dr. King, entitled “A More Perfect Union through the Coincidence of Opposites: Martin Luther King and the Presidency.” Its purpose was defined by Americans having “not understood how to use Martin Luther King” to bring about unity and justice in such crises, but rather wanting to handle every problem by some form of aggression.

The more than 3-hour-long webcast succeeded in showing that both Americans of very different political persuasions, and leaders from other nations, can agree that the 2020 Presidential election was a corrupt one; “big tech” censorship is impermissible and unconstitutional; and on some measures that must be taken. But more fundamental problems of economic development and healthcare have to be solved, and the level of thinking of Americans raised very much, to do it. At the conclusion of the meeting, Schiller Institute President Helga Zepp-LaRouche observed that the problem facing Americans is “not to fix one thing; but to have a cultural renaissance and by that strength, fix the republic”—and thereby to “keep it,” according to Ben Franklin’s so-famous counsel. Moderator Dennis Speed had opened the event with a video showing Marian Anderson’s beautiful voice and soul promising such a “more perfect union” when singing “My Country, ’Tis of Thee” to 75,000 rapt listeners gathered at the Lincoln Memorial in 1939, and the National Anthem at inaugurations of Presidents Dwight Eisenhower and John Kennedy and the 1963 March on Washington. 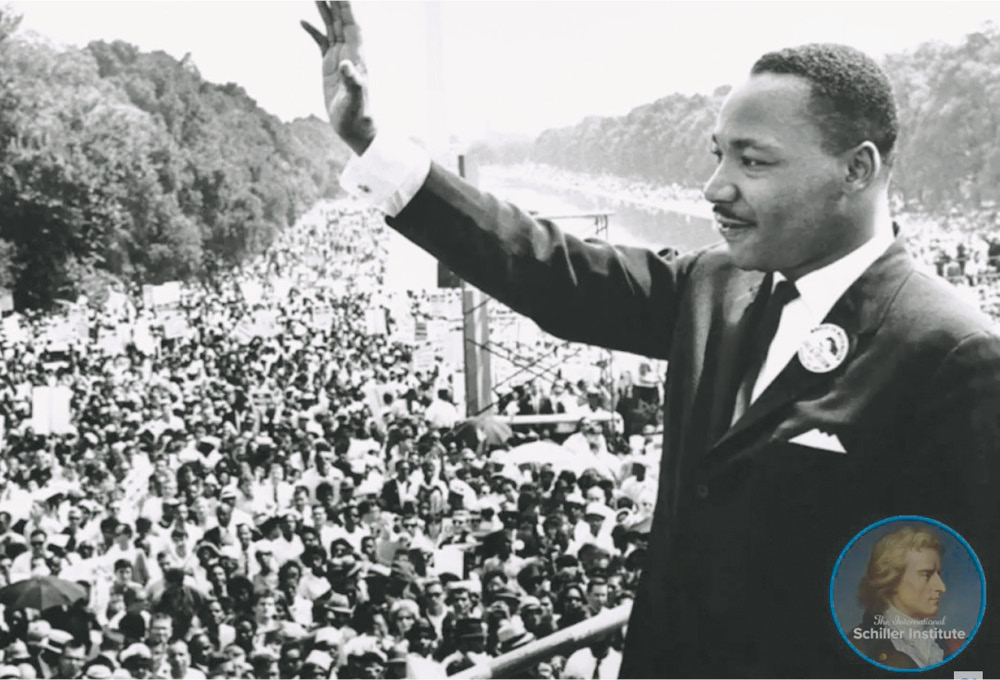 Public domain
Martin Luther King delivers his “I Have a Dream” speech, August 28, 1963, to the participants in the March on Washington from the steps of the Lincoln Memorial.

A fine performance of Schubert’s setting of Schiller’s poem “Sehnsucht” (Longing) by tenor John Sigerson conveyed how much courage is necessary actually to implement a great or beautiful idea. A very arresting interlude was the story, presented in interviews from TV shows and LaRouche movement conferences, of how Oklahoma NAACP leader Rev. Wade Watts used his wits and his love to “convert” his opposite, once Oklahoma Klan Grand Dragon, John Clary.

Helga LaRouche began the event noting that 25,000 troops will be guarding the inauguration and the Capital city during the week: “That is one-and-a-half divisions, half as many as the entire German army.” She asked the question prompted by recent remarks of certain leading U.S. generals: Are U.S. officers now starting to look at Americans as insurgents to be suppressed, and the troops’ deployment as if it were in Afghanistan? She immediately fingered the deeper cause:

There are massive efforts to impose a “Green Deal” on the United States and Europe, and to pull Russia and China into it. You can only impose this with a huge drop in living standards. With only “green” energy, you are reducing the energy flux-density of the productive process. No industrial economy can be maintained.

U.S. deindustrialization—now actually in process for 50 years and threatened with a “Green Deal” adoption of primitive energy and agriculture—does in fact underlie the increasing distemper of Americans. But Zepp-LaRouche added the Internet games such as “Q,” leading people away from reality, and the tech billionaires’ move to then block leaders from even communicating with the people. But it was striking that both she, and an “outside observer”—Argentine attorney Juan Francisco Soto, part of an international commission investigating the 2020 U.S. election—proposed economic development as one crucial solution. Helga LaRouche said the United States could immediately start cooperating with other major nations to help build modern health systems in every country against the pandemic; impose Glass-Steagall to break up Wall Street banks; and national banking to reindustrialize, and to industrialize underdeveloped nations. Soto urged a “pan-American congress of railroads,” “corridors of development from Alaska to Tierra del Fuego.” He spoke of a “new chapter of Americans for the New Silk Road,” so that “the Darien Gap can unite us!” 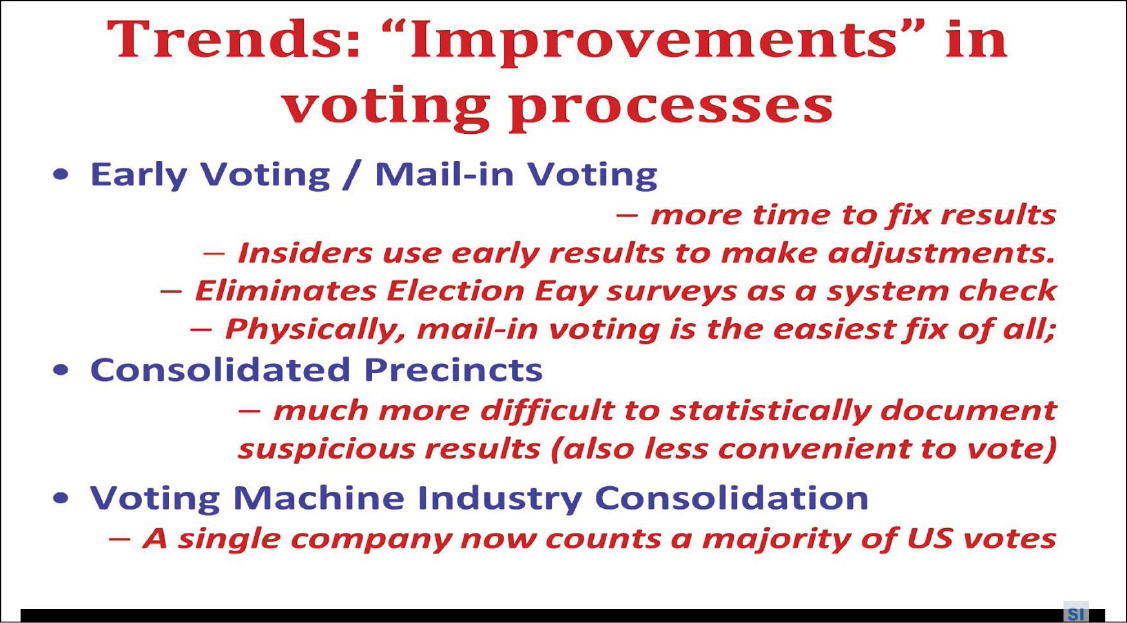 Courtesy of Steven Freeman
“Thousands of instances suggesting fraud” in the 2020 Presidential election.

The “Truth in Elections” panel’s section of the event demonstrated both the potential of unity in stamping out pervasive dishonesty in U.S. elections, and the difficulty in breaking through on this. As Helga LaRouche commented here, “Trying to do something about a beautiful idea, means being emotionally secure for a real battle, and continuing to develop one’s mind.”

Very diverse panelists clearly showed how the 2020 ballot-counting process was corrupt, unfair, and invited fraud—conclusions which now cannot be stated on social or national media! It was clear that veteran election expert Steven Freeman and the Election Integrity Forum, which has brought state frauds to court since the 2002 national election and fought on behalf of John Kerry in 2004, are just as certain of, in his words, “thousands of instances suggesting fraud” in the 2020 Presidential, as are the state legislators, officials, and activists from Pennsylvania and Georgia on the panel who support President Trump. So is Mr. Soto, the Argentine investigator. But blocked out and blacked out—including in Europe, Freeman said in answer to Helga LaRouche’s question—what can be done? Freeman’s organization has basic and simple answers which amount to running ballot-casting and ballot-counting in America as it is run in “most democracies in the world”—transparently at each step. Pennsylvania committeewoman and Trump elector Leah Hoopes urged people, besides working with the Schiller Institute, to get involved in local elections, work for unity and civil discourse, hold state legislators responsible (as the Constitution says they are), and “keep moving forward.” Pennsylvania State Rep. Russ Diamond said, “It is never too late to right a wrong,” either in that state or in the U.S. Supreme Court.

Zepp-LaRouche wanted to see Americans like them reach out and invite elected officials and experts from other countries, like Mr. Soto, “to at least look and think, what can be done?”

Most important, though, is this. The Schiller Institute has held meeting after conference after event since October, attacking the growing crisis around the election and then the protests and impeachment; each event has broadened out in both the now-numerous activists and officials involved, and the ideas presented to get truth and justice. This one was also the deepest. Dennis Speed came back finally to the Guard troops massing in the Capital, and the memorial of Martin Luther King standing there among them on the Mall, perhaps in dialogue with Abraham Lincoln: What is to become of our republic?