The British Malthusian oligarchy—controlling Mark Carney, former governor of the Bank of England, and others of the world’s main central bankers, and some of the most powerful asset managers, and bringing in political leaders like Joe Biden to push the “green new deal”—this oligarchy has now the most lethal weapon in its hands to impose massive austerity and reduce world population. It can shut down all financial flows going to life-sustaining fossil fuels and nuclear power.

On the front lines of these financial hatchet men is BlackRock, Inc., the world’s largest wealth management firm with more than $8 trillion dollars under its control.

Mike Billington tracks the methods used by BlackRock to force companies in the developing and advanced sectors to abandon fossil fuels and move to “renewables.” Karel Vereycken describes the rise to power of this mega-asset manager and its infiltration of the new Biden administration.

Jan. 30—Under the guise of “anthropogenic climate change”—the Big Lie that industrial and agricultural carbon emissions are the cause of global warming—BlackRock is leading the way in forcing companies and nations to shut down fossil fuel energy production, especially coal. As most poor nations and many advanced nations depend primarily on coal for electricity generation—and given the current pandemic, and the famine threatening Africa and other areas of the world—these actions to force the shut-down of coal-fired plants constitute an important aspect of the deadly Malthusian effort to reduce the world’s population—i.e., it is an act of genocide.

BlackRock CEO Larry Fink announced in January 2020 that the firm would divest itself of any company which generated more than 25% of revenue from coal, along with other measures to force the closure of fossil fuel companies, and prevent the construction of coal-fired power plants, as it did in forcing Peabody Coal in the United States back into bankruptcy. BlackRock threatened not only to disinvest, but that it might use its considerable influence to fire executives and members of boards of directors who would not follow such orders. 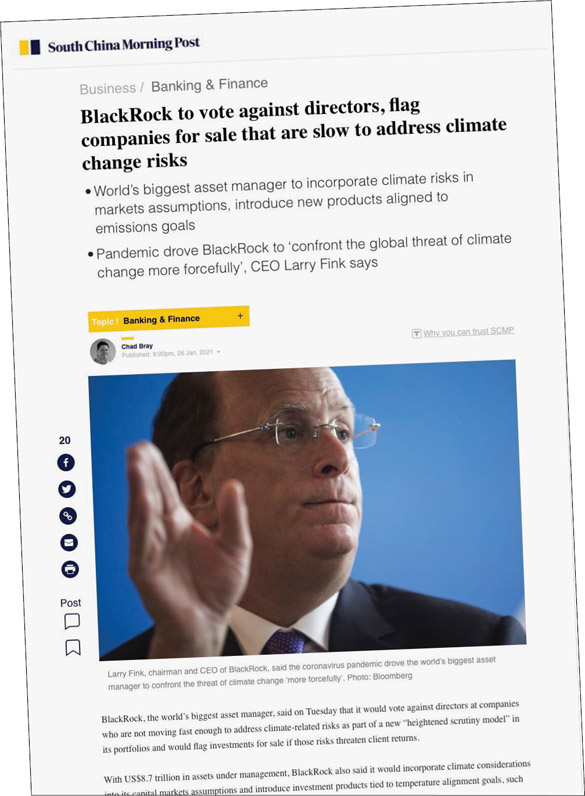 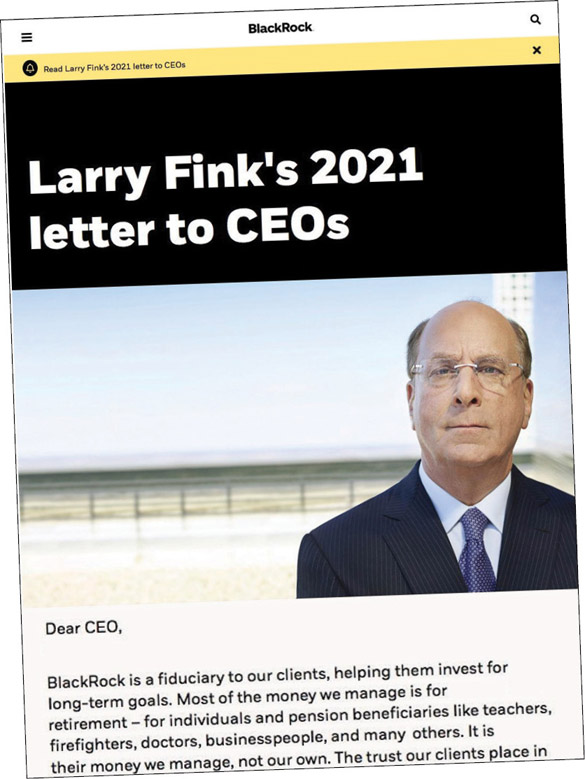 Fink’s 2021 annual letter to CEOs made this evil destruction of energy generation, in rich and poor countries alike, appear to be its “responsibility” as fiduciaries to the richest of the rich (BlackRock’s clients), to maximize financial returns, arguing that fossil fuel companies and other industries which have a large “carbon footprint” were losing equity value due to the supposedly popular belief that they are harmful to society. The question of which is the cause and which is the effect is obvious, as the rest of this Special Report makes clear.

In May 2020, BlackRock informed KEPCO, the very large Korea Electric Power Corporation, majority-owned by the South Korean government, that it must stop construction of coal-fired plants in Vietnam and Indonesia, or be punished financially. KEPCO has invested in power projects in 27 countries, with about 80% being fossil-fuel powered facilities, and it is also building nuclear power plants abroad. The BlackRock letter to KEPCO was co-signed by several other financial institutions—including the Church of England!

BlackRock soon added demands that KEPCO must cancel the contracted production of a 1,000 MW coal-fired plant in the Philippines, called Sual 2. Sual 2 was intended to replace Sual 1, which was built in the 1990s and was scheduled to be decommissioned in 2024. Even the U.S.-based Mongabay, a rabid greenie news site, while praising the shutdown of the Sual 2 project, admitted that Sual 1 “is credited by many with powering the town’s [Sual’s] development over the past two decades, boosting its annual average revenue to 380 million pesos ($7.85 million) in 2017 from 75 million pesos ($1.5 million) in 2001.” Such progress and improved standards of living are clearly not to be allowed by the Malthusians.

The announcement from KEPCO ending the contract to build Sual 2 came on October 16, 2020—an example of the power of BlackRock over nation-states. On October 28, just days later, the Secretary of Energy of the Philippines, Alfonso Cusi, announced that the government was declaring a moratorium on all new greenfield coal-fired plants. “We are pushing for the transition from fossil fuel-based technology utilization to cleaner energy sources to ensure more sustainable growth for the country.” “Sustainable growth” as used here is a euphemism for massively declining electricity availability and higher electricity prices. The Philippines already has rolling blackouts and the highest electricity price in Asia.

This is the same Secretary Cusi who four years ago supported the plan for reopening the mothballed Bataan Nuclear Power Plant in the Philippines, after learning about the plan from Philippine LaRouche Society chairman Butch Valdes, who had presented it at a regional meeting of the IAEA (International Atomic Energy Agency) in September 2016. But Cusi backed away from that pledge—most likely under pressure from the anti-nuclear Malthusians, as he has now succumbed to the BlackRock Malthusians.

KEPCO also announced, under pressure from BlackRock, that it was cancelling a $1 billion contract to build part of the 630 MW Thabametsi coal-fired plant in South Africa. As in the Philippines, South Africa has experienced rolling blackouts, as several major coal-fired power plants were shut down by greenies who successfully brought legal cases against them regarding water resources and other environmental issues. The World Bank has declared that 32 of the 48 nations of Africa are experiencing an energy crisis, while huge regions of the African continent have no electricity at all. Stopping all new coal-fired plants, while also shutting down existing plants, will drastically increase the death rate from disease and hunger. It will actually destroy the natural habitat the greenies claim to be defending, as trees are cut down for fuel.

Although KEPCO has declared that it will continue with the partially completed coal-fired plants in Vietnam and Indonesia, despite the BlackRock threats, it has capitulated to its command to launch no new coal-fired plants anywhere in the world.

It is not only developing nations which the Malthusians are attempting to destroy. The bankruptcy of the U.S. coal giant Peabody was precipitated by BlackRock and other funds divesting millions of dollars from the company. Michael Bloomberg has played a major role in this destruction of the American economy, pumping more than $500 million into his anti-coal campaign, called “Beyond Carbon.” At Peabody’s annual meeting, BlackRock voted against the re-election of the firm’s health and safety chair. It claimed “insufficient progress” in regard to setting targets for reductions in carbon emissions in keeping with the Task Force on Climate Related Financial Disclosures (TCFD, set up by the Financial Stability Board under the direction of then Bank of England head Mark Carney) and the Sustainability Accounting Standards Board (set up in 2011 to promote “ESG” criteria—environment, social, and good governance—on the financing of companies).

In Australia, BlackRock added its weight to a greenie attack on the nation’s largest electricity producer, AGL Energy. At an October 2020 shareholder meeting, BlackRock joined the demand that AGL move the scheduled date for closure of its huge 3,280 MW Loy Yang coal-fired power plant—the largest in Australia—by 12 years, from 2048 to 2036. The Financial Times described this as “the world’s biggest asset manager showing its teeth over climate concerns in the country.” Loy Yang produces 50% of the electricity for the state of Victoria. BlackRock is also targeting AGL’s 2640 MW Bayswater coal-fired plant in New South Wales.

South Korea’s KEPCO is also under fire in Australia, where regulators of the green persuasion are attempting to block the development of a coal mine in New South Wales, in which the company has invested more than $462 million over the past nine years.

According to a report in GreenTechMedia on September 8, 2020, “in the first half of 2020, more than 50 companies felt BlackRock’s disapproval over their lack of progress on climate change—including Chevron, ExxonMobil and German utility Uniper.” The report adds that a spokesperson for BlackRock reported that another 191 companies had “been put on watch,” to expect BlackRock to use its weight in their boardrooms in 2021.

In regard to Shell’s pledge to reach net-zero carbon emissions by 2050, BlackRock wrote: “We will hold the management and board directors to account for lack of progress on their delivery through future voting on director elections.”

Meanwhile, BlackRock is shifting billions of dollars into companies producing wind and solar operations all over the world—again raising the issue of whether BlackRock and its fellow Green Finance companies are driving energy prices up to create a new green bubble, under the cover of their pretended claim of “fiduciary responsibility” to invest profitably for their clients. There is no such thing as “fair market value” when you are talking about an $8 trillion market player.

BlackRock’s intention is to impose a “post-industrial society” while maintaining the ultimate power of the Empire’s financial oligarchy centered in the City of London and Wall Street, despite the bankruptcy of that banking Empire. Create a green bubble for speculation, and divert all credit from long-term development into such speculative activity. It is a Malthusian script for depopulation.