British Crown Think-Tank:We Intend To Take Away Your Food 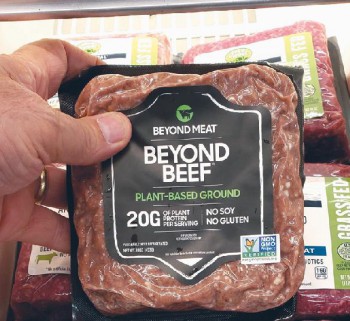 Feb. 5—The lead story on the website of Her Majesty’s Royal Institute of International Affairs (RIIA) since February 3, is a “research paper” laying out a strategy to systematically reduce food production and consumption worldwide. It proposes doing so by using methods similar to those being employed now to drive down energy use by banning fossil fuels—all in the name of defending “Nature.”

This document from the RIIA, “Food System Impacts on Biodiversity Loss: Three Levers for Food System Transformation in Support of Nature,” baldly admits that the intent of the monarchy’s policy is to raise the cost of food worldwide, and forcibly reduce world food production permanently. To propose doing so at a time when famine threatens hundreds of millions of lives, and an even greater number of families are going hungry in “rich” and poor countries alike, makes it undeniably clear that this is a plan for depopulation.

The five authors who wrote the paper are all veterans of the “climate crisis” mafia, starting with lead author Tim Benton, who heads the Energy, Environment and Resources Program at Chatham House (as the RIIA is known). Benton was one of the authors of the Intergovernmental Panel on Climate Change’s “Special Report on Climate Change and Land,” and the “UK Climate Change Risk Assessment 2017.”

The premise of the RIAA study is that “the production of food is the primary cause of biodiversity loss globally,” on land, and in freshwater and the seas. “The area of land occupied by agriculture has increased by around 5.5 times since 1600 and is still increasing,” it says. “Currently, cropping and animal husbandry occupy about 50% of the world’s habitable land.” Production of food is harmful for “degrading or destroying natural habitats and contributing to species extinction.”

They object that for decades—

Policies and economic structures have aimed to produce ever more food at ever lower cost. Intensified agricultural production degrades soils and ecosystems, driving down the productive capacity of land and necessitating even more intensive food production to keep pace with demand. Growing global consumption of cheaper calories and resource-intensive foods aggravates these pressures. Current food production depends heavily on the use of inputs such as fertilizer, pesticides, energy, land and water.

First: “Change dietary patterns to reduce food demand…. Continued growth in food demand exerts ever-growing pressure on land resources.” How? The most “crucial element … to bring food system emissions in line with the temperature goals of the Paris Agreement on climate change,” say they, is to downshift humanity away from high-value meat protein diets into predominantly plant-based diets—and to lower plant food consumption too, by reducing “overconsumption of calories.” Americans are singled out. The Royals calculate that “a switch from beef to beans in the diets of the entire U.S. population could free up … 42% of U.S. cropland—for other uses such as ecosystem restoration or more nature-friendly farming.” 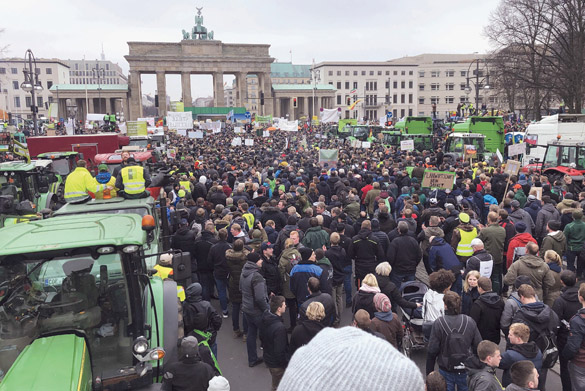 Deutscher Bauernverband
The RIIA admits the monarchy’s intent is to raise the cost of food worldwide, and forcibly reduce world food production permanently, “in support of Nature.” Shown is a large farmer protest in Berlin on November 26, 2019.

Second: Land must be taken out of farming, “protected and set aside for Nature.” Not on any small scale, either:

This will typically require significant areas of land to be left or managed for nature, primarily because the extinction risk for any species grows as its population size shrinks, and because many large animals require a large area of habitat to sustain an adequate population.

Third: Farming must be transformed; there must be a forced reduction of the inputs used in modern farming, including of the machinery which has freed men and women from backbreaking labor in the fields.

No one “lever” will work without the others, they repeat, but “dietary change”—reducing “food demand”—is “essential in order to preserve existing native ecosystems and restore those that have been removed or degraded.”

Since most of humanity will never voluntarily accept such policies, “global guidelines in policy areas such as responsible investment, dietary change and nature-based climate change mitigation solutions” are required. “Incentives” and “responsible investment”—cutting credit to modern farming, as also to modern forms of energy—will be necessary. Such are the proposed measures of the RIIA to the series of international conferences and summits scheduled for 2021 on “food systems and biodiversity,” and the first “UN Food Systems Summit” later in the year.