UK Goes Back to Wood-Burning 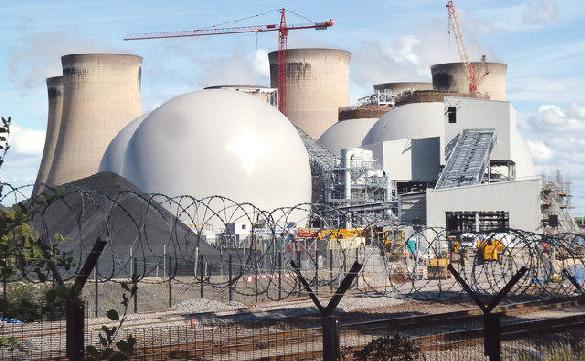 Feb. 4—Nothing gets at the genocidal intent of “renewable” energies like “biomass.” Certainly burning food in the form of biofuels is insane, but burning wood pellets in converted coal power plants quickly shows the Malthusian intent of green technology—particularly when considered from the standpoint of Lyndon LaRouche’s “potential relative population-density.” Burning wood, which of course produces large amounts of CO2, is actually a good thing to a climate change fundamentalist, since it will be reabsorbed by trees, and is therefore “carbon neutral” and can be classified as “renewable” energy. To appreciate this insane outlook, we will look at the curious case of the UK’s big Drax Power Station.

The Drax facility in the North Yorkshire countryside is the largest power station in the UK, providing 6% of UK electricity. Drax Power Station consists of six 660 MW power units, giving a total capacity of 3.96 GW. In 2012, Drax began to move for a full conversion of its coal burning power units to burn wood pellets, imported from forests around the world. Four of the six units that now burn wood pellets, at a capacity of 2.6 GW, “would require an annual supply in 2017 of 1.2 million hectares (4,600 sq. mi, or 12,000 sq. km),” according to the Bloomberg article, “Biggest English Polluter Spends $1 Billion to Burn Wood.”

Assuming those numbers are correct, or at least in the ballpark, consider the issue of energy-flux density and its relationship to potential relative population density from this standpoint. According to the UN Food and Agricultural Organization’s Global Forest Resources Assessment 2020 report, the world’s total forest area is 4.06 billion hectares (31% of total land area). In a generation, Drax alone would burn up 1% of the world’s forests. Powering all of the UK that way would consume more than 15%.

According to various reports about the Drax Power Station, willow is one of their top choices of wood to burn. Given that the average time for a willow tree to grow to maturity is 15 years, it can be estimated that this technology, if it became the source of electricity for the human race, would support about 600 million people. Isn’t that what the genocidal lunatics of the House of Windsor have been promoting for decades—that optimal population for the peasant class would be somewhere between 500 million and a billion?

Japan Needs Its Reactors Back, and More

Feb. 4—Japan’s Energy Minister Hiroshi Kajiyama told the Financial Times on February 3 that power shortages last month, due to heavy snowfall, showed Japan needs to go nuclear again. Kajiyama said: “Personally, I think nuclear power will be indispensable.” He described Japan’s electricity supply as “touch-and-go” during the snowfall last month, resulting in high electricity prices and tight supplies in some areas of the country. “Solar wasn’t generating. Wind wasn’t generating. I’m trying to persuade everybody that in the end we need nuclear power.”

Prior to the March 2011 accident at the Fukushima Daiichi plant, Japan’s nuclear generating capacity had provided about 30% of the nation’s electricity. Within 14 months of the powerful tsunami and the accident, the country’s nuclear generation had been brought to a standstill pending regulatory change. So far, nine of Japan’s 39 operable reactors have cleared inspections confirming they meet the new regulatory safety standards, and have resumed operation. Another 18 reactors have applied to restart.

In 2019, nuclear energy provided just 7.5% of the country’s electricity. Japan’s Basic Energy Plan, set in 2018 and due for revision this year, targets 22-24% of its energy to come from renewables by 2030, along with 20-22% from nuclear power and 56% from fossil fuels. But the nation can start building new third- and fourth-generation nuclear reactors, and not keep suffering “Solar wasn’t generating. Wind wasn’t generating.”