Feb. 1—The World Economic Forum (WEF), dominated in its recent conferences by Prince Charles, Mark Carney and Klaus Schwab, is the leading motivator of a new coalition of business and institutional powers which is now aiming to break down the very building blocks of human economy. The emergence of this coalition, aimed directly to target the primary elements of industrial production as “carbon polluters,” illustrates how these oligarchical forces work.

Launched January 27 directly from the WEF’s five-day conference for the so-called “Great Reset,” the Mission Possible Partnership has set its sights on “decarbonizing” the cement, steel, aluminum and chemical industries, “as well as the ships, planes, and trucks that move them.” 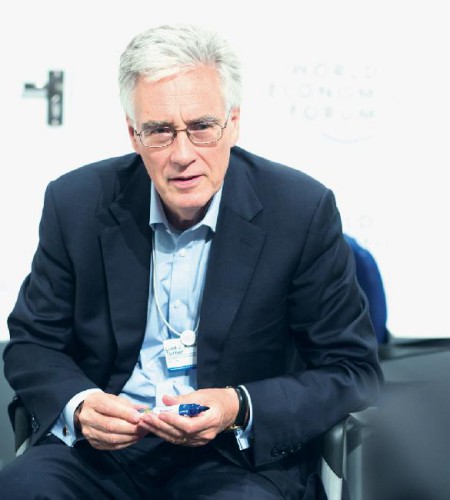 WEF/Sikarin Fon Thanachaiary
Lord Adair Turner of Ecchinswell, Co-Chair, Energy Transitions Commission: “Our goal is to … decarbonize industry and transport in this decade.”

Joining the WEF in this triage of humanity is its executive arm, the Energy Transitions Commission, led by Lord Adair Turner of Ecchinswell, with 50 “commissioners” from the largest financial and multi-national institutions of Western society; the Rocky Mountain Institute, founded in 2004 and “globalized” through merger with Richard Branson’s Carbon War Room in 2014; and the We Mean Business coalition of globalized companies.

“If business continues as usual, by 2030 these global industries will exceed the total amount of carbon the world can emit this century based on a 1.5°C carbon budget,” these oligarchs pronounce. Therefore,

Our goal is to propel a committed community of CEOs from carbon-intensive industries, together with their financiers, customers and suppliers, to agree—and more importantly, to act—on the essential decisions required for decarbonizing industry and transport in this decade. We are orchestrating high-ambition disruption through net-zero industry platforms for seven of the world’s most carbon-intensive sectors.” [Emphasis added.]

Clearly these vital industrial sectors will have nowhere near their productive value if they are drastically “decarbonized.” As noted in this white paper, a chapter on the future of steel, written for the WEF by the think-tank SYSTEMIQ, forecasts a dramatic worldwide drop in steel production over the rest of this century, associated with the suppression of carbon fuel burning in steelmaking.

According to its launch statement on the WEF website:

The Mission Possible Partnership will be the delivery mechanism for Race to Zero Breakthroughs in hard-to-abate sectors. These are specific near-term tipping points for each sector of the global economy in the race to net zero emissions, being launched by COP26 President Alok Sharma and U.S. Special Presidential Envoy for Climate John Kerry as part of the Davos Agenda. In late 2021, the Partnership will aim to showcase net-zero agreement breakthroughs in shipping, aviation, and steel. Within three years, it plans to help companies complete climate action agreements in these sectors as well as trucking, chemicals, cement, and aluminum.

So it is not “only” electric power generation, fossil fuel heating, and chemical fertilizers in agriculture which are under the “Great Reset” attack; it is the entire range of the most important industries of modern developed economies. This is hard-core Malthusianism of the oligarchical thinkers and agents directly around Prince Charles and City of London financiers. The Mission Possible Partnership claims to have over 300 multinational corporations already “on board,” whatever that currently means. From the tenor of the launch, those who don’t join (or step aside) will be destroyed through “defunding” or other options available to global oligarchs.