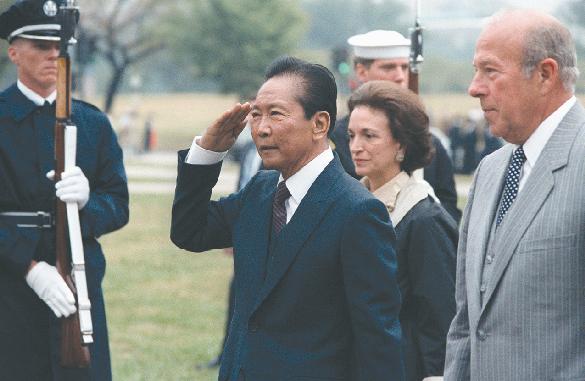 Feb. 13—In the late 1970s and early 1980s, the Philippines was being rapidly transformed into the leading scientific, industrial, agricultural and medical nation in Southeast Asia, under the nationalist leader Ferdinand Marcos. The first nuclear power plant, eleven major industrial development projects, a drive for self-sufficiency in rice and other agricultural goods, the Philippine Heart Center available to all the citizens of southeast Asia, and more. Marcos made friends with his Chinese neighbor, as well as with other countries demonized by their former colonial lords in Washington. This was a casus belli for George Shultz, then the Secretary of State to President Ronald Reagan. Since Reagan had great admiration for what Marcos was doing on behalf of his nation and his neighbors, and was a close friend of the Philippine President, Shultz and his deputy, neocon Paul Wolfowitz (a leading architect of the disastrous Iraq war 20 years later) went to work behind Reagan’s back to launch a “color revolution” (yellow, in this case) to overthrow Marcos. (Orchestration of the coup was described more fully in EIR of Dec. 24, 2004.)

The oil crisis and the Volcker interest rate spike created a major crisis in developing countries like the Philippines. Shultz, working with Police General Fidel Ramos and the well-named Cardinal Sin, orchestrated the discontent in the capital city of Manila, forced Marcos to call a snap election, and, with help from vote-fraud expert Lord Mark Malloch Brown, declared the election results to be fraudulent. (Marcos had easily won the election due to his overwhelming support from the population in the rural areas.) In February 1986, Shultz mobilized Cardinal Sin to call for the people of Manila to come out on the streets, while Gen. Ramos orchestrated a military coup, forcing Marcos to leave the country.

While this was heralded internationally as a “People’s Power” victory, the country was immediately raped by the international financial cartels represented by Shultz. The nuclear plant (fully completed and ready to go) was mothballed, and still is. The industrial projects were shut down, the country was forced to give up food self-sufficiency, while debt payment (including for the unused nuclear power plant) was made the first priority, ahead of all spending on the nation’s economy and its people.

The country which was admired throughout Asia as a model for development—even South Korea at that time looked to the Philippines as a model for industrialization—rapidly became the “poor boy of Asia,” as it was called. Mass poverty, terrorist uprisings, and a horrible drug crisis have plagued the nation ever since.

The current President Rodrigo Duterte has offered a valiant effort to return to the development policies of Marcos, and turned to China for development projects, but the imbedded oligarchy (and the pandemic) has undermined that effort to a great extent. Shultz will not be missed by the Philippine nation.