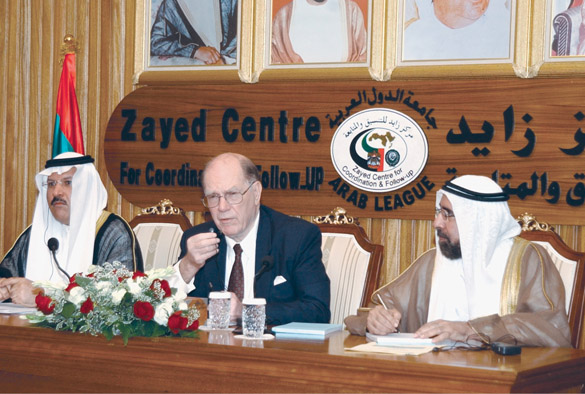 Feb. 12—The successful mission to insert a Mars spacecraft developed and built by the United Arab Emirates (UAE) into orbit around the red planet, has kindled hope for the future among young people in Southwest Asia. The UAE has been congratulated by space agency and political leaders around the world. One step in the building of the UAE’s scientific and economic development strategy over recent decades, was the important presentation of the late statesman and economist Lyndon LaRouche at a major conference in Abu Dhabi in 2002.

The keynote of the June 2-3 conference in the United Arab Emirates on “The Role of Oil and Gas in World Politics” was given, not by an Arab, but by Lyndon LaRouche, candidate for the 2004 Democratic nomination for U.S. President. In the UAE’s capital, Abu Dhabi, leading personalities from Arab oil-producing nations gathered at the Arab League’s Zayed Centre for Coordination and Follow-Up. They heard LaRouche speak on “The Mideast as a Strategic Crossroad.” [See below for that presentation.]

The Zayed Centre had emphasized in publicizing the event that it “does not want this dialogue to be an Arab-to-Arab dialogue, but … an Arab dialogue with all parties in the world that are interested in the issues and future of the Arab world.” Thus, “the major American politician and Presidential candidate” was invited “as an appreciation of the positive stances expressed by LaRouche toward the causes of the Arab nation and just causes in all parts of the world in general.”

UAE’s founder, Sheikh Zayed bin Sultan Al-Nahyan, recognized that “money is meaningless if not mobilized for the good of man,” the country’s oil wealth “valueless without national human resources qualified for and capable of building up the country” through science and industry. It was that understanding that led the far-sighted leaders of the UAE to invite physical economist LaRouche to deliver the keynote, and to develop both nuclear power and space programs.

Coinciding Visions of the Future

We have to invest oil revenues in the public services projects…. We should build our country with knowledge and culture, and should educate the new generation, as education is a wealth in itself…. Oil wealth is utilized in yielding various sources of wealth. The first is culture and science, the second is agriculture, the third is industry.

This was a similar view to the one presented in detail by LaRouche in his 2002 conference keynote, and the path was set for the emergence of a young generation capable of aiming its arrows of knowledge and optimism into space and out to the planets. 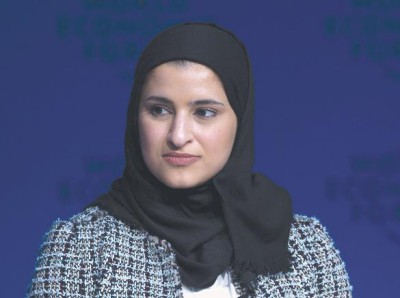 In 2017, the UAE Space Agency chair and Minister for Advanced Sciences Sarah Al-Amiri, then barely past 30 years of age, gave an extraordinary TED Talk, “A Mars Mission of HOPE,” in which she said that the purpose of the UAE space program should be “stimulating a lot of change within the UAE’s economy, that today more than ever should have a solid foundation in science.” She referred to the wars in Southwest Asia:

Today our region, the Middle East, is filled with turmoil. It is a region that is going through a few of its darkest hours. And what we are doing at the Hope Emirates Mars Mission is providing a message. The Middle East is made up of over 50% youth. This project Hope is being run by a team that is under 35, a team that is made up of 34% women. The average age is 27. An entire nation is putting its hope on a team of youth, and presenting a message to the region.

This mission is also called Hope because we are contributing to the global understanding of a planet’s data. We are going above and beyond the turmoil that is now defining our region, and becoming positive contributors to science. Science to me is the most international form of collaboration. It is limitless. It is borderless.

And it’s run by passions of individuals for the benefit of human understanding. 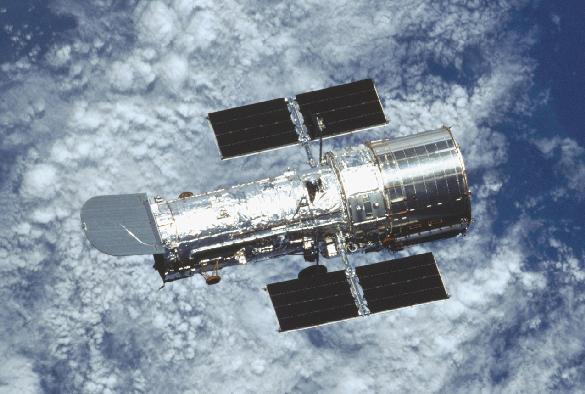 NASA
The Hubble Space Telescope has established in the past 30 years that there are more than a trillion galaxies in the visible universe. Each has vast numbers of stars, some of which have planets suitable for life.

Today, I’d like you all to do something with me. I want everyone to lift up their finger and cover a region of the sky. Look up at your finger—the region of your fingertip that is blocking the sky. The Hubble Space Telescope was pointed at a region that small, and it came up with this image. This image, the dots of light that you see—they’re not stars. They’re galaxies. There are hundreds of billions of stars in each one of those dots in that small region of sky that we look at. Each [of] hundreds of billions of galaxies contains billions of stars. Each star,—imagine how many Goldilocks zones [where water can exist on a planet—ed.] exist around them. How many planets could possibly exist around those? And how many possibilities of life that could possibly exist in this small portion of the sky?

Sarah Al-Amiri now bears lead responsibility for the Hope Mars orbiter of the UAE, developed in cooperation with several other spacefaring nations and launched from Earth on a Japanese rocket. This was the vision of Sheikh Zayed bin Sultan Al-Nahyan, and of Lyndon LaRouche. 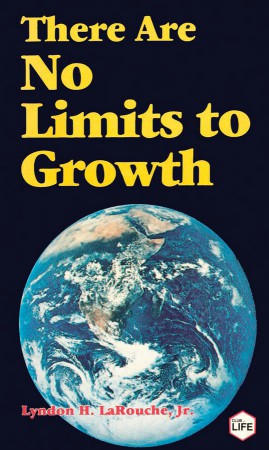 No Limits to Growth at Mars

Two decades earlier than LaRouche’s Abu Dhabi speech, and now nearly 40 years ago, he had published his book, There Are No Limits to Growth, in answer to the dangerous folly—later discredited and acknowledged false—of the Club of Rome’s infamous 1972 Malthusian revival, Limits to Growth. One extraordinary chapter was titled, “The Forests and Cities of Mars.”

Imagine Mars, [LaRouche wrote,] fifty or sixty years from now [into the 2030s—ed.] and so imagine yourself seeing a square kilometer thickly planted with young trees, each grown already to approximately a meter in height. Is this “science fiction”? Unless we destroy civilization with thermonuclear warfare, or, alternatively, famines and pandemics caused by neo-Malthusian policies, between A.D. 2030 and 2040, there should be a significant beginning of large-scale colonization of Mars by mankind. The U.S.A.’s NASA already possessed knowledge of much of the technology needed to begin manned exploration of Mars before the end of the 1960s. Today, we have either solved, or are within less than ten years of solving, two of the greatest obstacles to Mars Colonization. The first of these two problems is the need for improved sources of energy to power space flight, and also to provide sufficiently abundant energy per capita to sustain an Earth-like artificial environment on that nearby planet, or, much closer, the Moon….

The first steps toward colonization of Mars should begin approximately AD 2025–2035, or perhaps earlier if progress of science and economy permits this. With the fusion beam technology, and biophysical technology of the years 2025–2030, the preparations of Mars’ colonization will present vastly less difficulty than did the pre-colonization of the Moon thirty or so years earlier. For one thing, Mars already has an atmosphere, a thin atmosphere by Earth standards, but some raw material for our colonizing engineers to begin with. In due course, we shall probably work to build up Mars’ atmosphere, but we shall probably begin with artificial environments in bubble-covered agro-industrial complexes, with our agriculture largely hydroponic.

The colonists from Earth will not be satisfied with that. One can hear a child’s voice: “But, Daddy, where are the trees?” We shall foresee that child’s question. We shall have a forest or two on Mars even merely because people like trees, and the idea of having really living, singing birds and so forth, will make the strange planet much more like home.

As Sarah Al-Amiri evocatively said, imagine “how positive and infinite your contribution is on this infinitesimal planet.” She and the United Arab Emirates are to be looked to, for further great projects of economic development, in Southwest Asia and on Mars, as Lyndon LaRouche looked forward to them.