Livestream Memorial on theSecond Anniversary of His Death 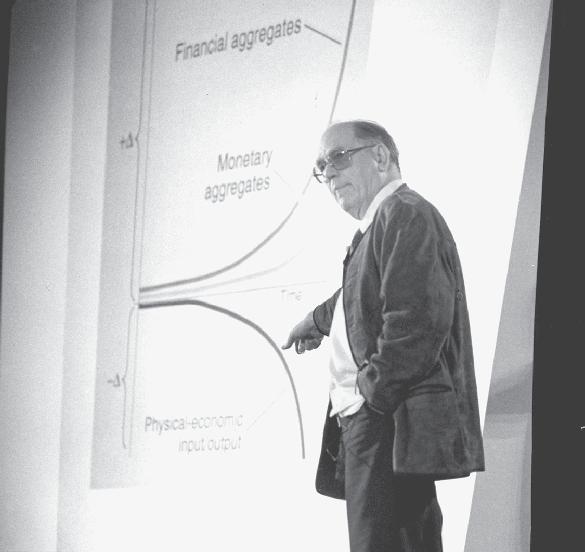 EIRNS/Stuart Lewis
At a conference of his movement in Crystal City, Virginia, LaRouche uses his heuristic “triple curve” function to illustrate that the exponential rise in monetary and financial aggregates collapses physical-economic input/output exponentially, resulting in a breakdown crisis. January 17, 1998.

Feb. 15—February 12, 2021 marked the second anniversary of the death of America’s greatest statesman and philosopher, Lyndon H. LaRouche, Jr., who passed away on Abraham Lincoln’s birthday in 2019 at the age of 96. The LaRouche Organization and the Schiller Institute, founded by his wife Helga Zepp-LaRouche, commemorated that day with a 19-hour livestream of Lyndon LaRouche’s speeches and lectures, titled “Lyndon LaRouche in the Simultaneity of Eternity,” which opened and concluded with the powerful memorial concert which was held in New York City on June 8 in the year of his death.

The livestream featured some of LaRouche’s most critical, history-changing interventions—but to those who knew him and his legacy, far more than 19 hours would be required to revisit even a fraction of the speeches and classes he gave that changed history. In that regard, Lyn was a true scientist, always challenging the prevailing assumptions of the day, including his own, and developing a “higher hypothesis.”

To those who began watching, at whatever point in the day-long event, it was “nearly impossible to tear myself away,” said several of LaRouche’s associates, this author included. Allowing oneself to spend hours in the presence of such a mind through this video tour was a welcome and joyful contrast to the treasonous and deceitful spectacle taking place in the United States Senate of the second impeachment trial of former President Donald Trump, which finally ended in the expected acquittal, but continues in the press.

Equally disturbing are the recent comments of the STRATCOM Commander Admiral Charles A. Richard, about the necessity to prepare for the possibility of nuclear war, and continuing the demonization of Russia and China. The new COVID-19 relief bill would have been seen by LaRouche as a sick joke, and just a further vindication of his 1996 Triple Curve Function, which was illustrated in the penultimate video of the day.

Even after watching only a few minutes of Lyndon LaRouche and/or hearing from others of the profound effect he had on their lives, it is clear that the United States sufferers greatly from the lack of such inspired leadership as LaRouche embodied for decades, including emphatically throughout his eight presidential election campaigns.

As Helga Zepp-LaRouche described her late husband in her introduction to her video statement for the LaRouche Legacy Foundation, Lyndon LaRouche, from the beginning, developed an analysis of what went wrong with the system, on the one side, and the necessary solution on the other:

I think one of the most important conceptions, was that in 1975, he presented for the first time a comprehensive idea of what such a new world economic system would look like: the International Development Bank—the idea that there should be a transfer of technology worth $200 billion every year, overcoming underdevelopment through large projects. This idea immediately caught fire. In 1976, the Non Aligned Movement, in their final conference in Colombo [Sri Lanka], basically made a final resolution more or less adopting that policy, word by word.

In the following years, Lyn was working with Indira Gandhi, with José López Portillo, on these conceptions. I think that this is a very rich story. We traveled in all of these decades to more than forty countries. We met with leaders from practically every single country of the planet. I can assure you, from my own experience, that all these people looked at Lyn with an incredible hope for what the United States would be.

Times, given in hours (not minutes) are according to the video:

02:55—Megan Dobrodt, President of the Schiller Institute, and member of LaRouche’s science team, introduces the Woman on Mars, LaRouche’s famous 1988 nationally televised campaign program, which inspired thousands of young girls to write in volunteering to be that woman.

03:30—Megan Dobrodt introduces LaRouche speaking on “Creativity as Such,” from an address he made to a conference in Germany in 2011.

04:19—Jason Ross, Secretary-Treasurer of The LaRouche Organization, and member of LaRouche’s Science Team, introduces a presentation given by himself and Megan Dobrodt in Germany in 2019, unfolding the story of LaRouche’s “Basement Team” of young scientists.

05:50—Helga Zepp-LaRouche introduces the 2019 German conference presentation, “If God Selects Someone as a Leader, No One Can Destroy Him,” in memory of Lyndon LaRouche, by Dr. Jozef Mikloško, former Vice-Premier of Czechoslovakia.

7:07—Gerry Rose develops the context and significance of Lyndon LaRouche’s debate with Abba Lerner in 1971 at Queens College. Rose was present for the debate.

7:18—Excerpt from the 1971 debate between Abba Lerner and Lyndon LaRouche.

7:47—Jacques Cheminade introduces an answer given by Lyndon LaRouche, in response to a question at a 1995 conference regarding how to organize. Jacques documents the harassment by the FBI of LaRouche’s movement in general and of him personally.

8:04—Lyndon LaRouche answers a question presented to him at a 1995 conference: “Who Put LaRouche in Prison?”

9:44—Dennis Speed introduces a clip of Lyndon LaRouche addressing a cadre school in 2002.

9:46—Lyndon LaRouche addresses a cadre school in 2002 on the subject of Hamlet.

11:29—Lyndon LaRouche answers questions from a 2002 cadre school (note: the second question is cut off—YouTube only plays back the first 12 hours of a broadcast).

00:05—Diane Sare, LaRouche Independent candidate for U.S. Senate, introduces LaRouche’s February 17, 1996 keynote address to a conference in Virginia, “If You Passed Economics 101, You Probably Are a Member of an Endangered Species.”