This article appears in the February 26, 2021 issue of Executive Intelligence Review.

Dependence on Windmills, Solar Panels Will Create Brownouts and Blackouts

On February 9, less than one week before the polar vortex struck Texas on February 14, two representatives of the LaRouche Organization, Joel DeJean and Joe Jennings, addressed the Houston City Council and the Mayor of Houston in a public session on the danger facing Texas, and the world, from the Green New Deal. Their warning was indeed prophetic, as the warnings from Lyndon LaRouche and his association have been for the past 50 years. An embedded link has been added. Two long-time campaigners for high energy-dense fuels for baseload power, Joel DeJean (above) and Joe Jennings (below) from the LaRouche Organization, addressed the Houston City Council on February 9, warning of the danger facing Texas and the world from going with the Green New Deal’s solar and wind power. Five days later, millions of Texans were freezing in the dark.
View full size 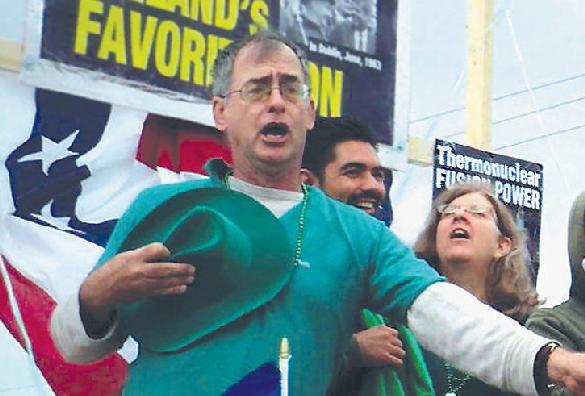 Joel DeJean: My name is Joel DeJean. I want to warn the City Council and the Mayor to avoid the suicide pact known as the Green New Deal, the Great Reset. Houston, the energy capital of the world, is in the crosshairs. The Houston Chronicle reported that three major oil companies lost $60 billion over the recent period. Fossil fuels have allowed the world to go from one billion people in 1900 to close to 8 billion people today. As an electrical engineer who worked in Dallas for many years for Texas Instruments, I can tell you the dirty little secret about electric cars. Petroleum has 40 times the energy density of the best electric battery available today, the lithium ion battery…. If we replace half of the automobiles in America today—over 150 million cars to replace—we would have to increase cobalt production worldwide by 12 times, lithium 6 times, copper 4 times, and rare earths 10 times.

And where would we get the electricity? We would have to double the electricity production, and if we eliminate natural gas turbines, coal plants, and nuclear plants, and depend on windmills, which have an availability of less than 40%; and solar panels, with an availability of less than 25%—we’ll be heading for brown outs and blackouts. What we should be doing is mass producing small modular nuclear reactors, 70-200 MW. We should fully fund the Artemis program to keep the schedule to get back to the Moon by 2024, where there happens to be deposits of Helium 3, the best fuel for fusion power.

Joe Jennings: I am Joe Jennings, a resident of Houston, a 44-year associate of the physical economist Lyndon LaRouche.

This Friday, February 12, Abraham Lincoln’s birthday, will also be two years since the death of Mr. LaRouche at age 96. On that day, The LaRouche Organization will release a White Paper titled “Great Leap Backward—LaRouche Exposes the Green New Deal.”

With this paper we will expose a deadly swindle known as Green Finance, which was the central subject of the January conference of the World Economic Forum in Davos, Switzerland. Put simply, the billionaires, hedge fund operators and the titled nobility of Davos intend to use the contrived hysteria about so-called man-made climate change to divert trillions of dollars away from industrial and agricultural activities which sustain human life, into a bonanza of speculation in carbon futures, centered in the City of London financial hub. They will enforce the reduction of carbon dioxide to net zero, the level of the pre-industrial age. The consequence will be to reduce the human population itself, as passionately advocated by conference coordinator Prince Charles of the House of Windsor.

As stated by Mark Carney, former Governor of the Bank of England, and later the UN’s Special Envoy on Climate Action and Finance: “Firms which have aligned their business models with the net zero carbon world will be rewarded handsomely. Those that fail to adapt will cease to exist.” This will be a global corporatist dictatorship by private finance, choking off credit to farms and industries unless they pay tribute in the form of carbon offsets to the Lords of London.

Consider South Africa, struggling with shortages of food and electricity, and now mutating strains of COVID-19. In December this nation was compelled by BlackRock and others to cancel six coal-fired plants. The lights will turn off and people will die.

Here in Houston, we all remember the financial wizards at Enron. While the bubble was expanding, they were the smartest guys in the room. As it started to deflate, Enron looted California almost to death. The Davos boys are a thousand times worse. Their bubble of over a quadrillion dollars in derivative debt has been kept afloat by zero-percent interest rates and infusions of free money from the Federal Reserve. The Green Finance will kill the physical economy to save the grotesque bubble of speculation.

We propose another way forward. Houston, the USA, and the world must reject Green Finance, pull out of the unscientific climate accords, and put the bubbleheads through bankruptcy. We must start a new future based on true science and industrial progress. This White Paper will chart the way forward to accomplish that end. We urge you to study the paper and act upon it. Thank you.