The Coming Fall of theHouse of Windsor, Revisited

Left: CC/Georges Biard ; right: CC/Scorpions and Centaurs
In 1995, Princess Diana presented a vivid picture of the dysfunctional and abusive nature of the Royal Family, and in particular of her estranged husband Prince Charles. She paid with her life. At right, Queen Elizabeth and her husband Prince Philip.

March 12—The following excerpt from the October 28, 1994 EIR Special Report, The Coming Fall of the House of Windsor by Lyndon H. LaRouche, Jr. is, as Mr. LaRouche’s writings usually are, as timely today as the day they were written. We are experiencing today a new crisis within the ruling (Hanoverian) House of Windsor, the Monarchy of the British Empire. The estranged Prince Harry and his American wife Meghan Markle have gone on television to expose the dysfunctional and racist nature of that Royal Family, provoking panic and horror not only within the family itself, but also among the defenders of the Empire, both in the United Kingdom and in the United States establishment.

These developments necessarily bring to mind the famous case of Princess Diana, the late Princess of Wales, wife to the current heir to the throne, Charles, the Prince of Wales. On November 19, 1995, Princess Diana appeared on the BBC’s Panorama program, and presented to the millions of viewers around the world a vivid picture of the (even then) dysfunctional and abusive nature of the Royal Family, and in particular of her estranged husband Prince Charles—who, she declared, should not become King; rather her son Prince William should replace him in the succession. Lady Di added: “I shall not go quietly.”

The response of the Royal Family and the Imperial oligarchy was fierce. Of particular note was the statement of the royal biographer A.N. Wilson, who noted in a New York Times commentary that Lady Diana’s presentation was a “skillfully organized attack on the institution of the of the monarchy itself. Not just on Prince Charles. Not just on the Queen, whom Diane obviously hates. But on the monarchy.” Prophetically, Wilson added: “The Establishment can get very nasty, indeed, and for all her undoubted popularity, if she continues to rock the boat in this way, the Establishment will simply get rid of her.”

On August 31, 1997, Princess Diana was killed in a car crash with her boyfriend Dodi al-Fayed, the son of the Egyptian owner of the Harrods luxury department store in London. The cause of the crash has never been determined, but there is much circumstantial evidence that it was not an accident.

As today, the issue of race was central to the controversy. The Windsors were furious at Lady Di’s exposure of the family secrets, but perhaps even more disturbing was the thought that the mother of Prince William and Prince Harry would have another child, with Egyptian blood.

Lyndon LaRouche and Scott Thompson of EIR made the decision in the days after Diana’s death to reveal the correspondence that had taken place between the Princess and the LaRouche organization over the previous two years. In October of 1994, EIR had published the Special Report excerpted below, The Coming Fall of the House of Windsor, in which Mr. LaRouche and his associates exposed the scandals taking place at that time within the Royal Family, but focused on the role of Prince Philip, Duke of Edinburgh, the Royal Consort to Queen Elizabeth. Prince Philip, LaRouche wrote, “has personally directed his World Wildlife Fund in genocide against the population of sub-Saharan Africa. For most of us, that Hitler-like behavior would be grounds to convict the monarchy.” You can read the rest below.

The Special Report was delivered by EIR’s Scott Thompson, one of its primary authors, to many members of the Royal Family. Only Princess Diana responded, sending a note through her private secretary:

The Princess of Wales has asked me to thank you for your letter and enclosure.

Her Royal Highness appreciates the interest which prompted you to write and has asked me to send you her best wishes.

Two subsequent studies of the House of Windsor were later mailed to Princess Diana, and in a response of February 19, 1997, she again thanked Thompson for “the most interesting enclosures,” closing: “Your letter meant a great deal to the Princess who has asked me to send you her sincere thanks”—signed this time by Mrs. Colin MacMillan. 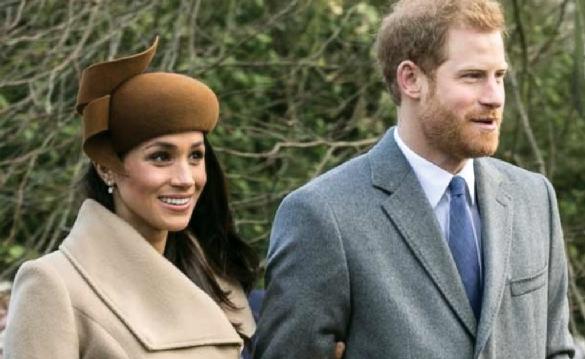 CC/Mark Jones
Meghan Markle has exposed the racist character of the Royals. Here she is with her husband, Prince Harry.

Meghan Markle may not be of the stature of Princess Diana, but that does not detract from her exposure, as Lady Di did, of the dysfunctional, and in this case, the racist character of the Royals. No one who reads even a part of the EIR Special Report excerpted below would have any doubt of the truth of the racist nature of the family that committed genocide on a massive scale in India and across Africa, over centuries, and continues still today through the evil auspices of the Green New Deal.

While Prince Philip so hated humanity that he wished to be reincarnated as a deadly virus, to “contribute something to solve the population problem,” he has been outdone by Princess Diana’s deranged former husband Prince Charles. EIR has again published a Special Report, that of February 12, 2021, The Great Leap Backward—LaRouche Exposes the Green New Deal. Included in this Report is an article by EIR’s Richard Freeman, “Prince Charles Invented and Runs the ‘Green New Deal’.” You are strongly encouraged to read that article, and to purchase and circulate the full Report.

The Royal Family released a statement following Harry and Meghan’s appearance on the Oprah Winfrey show, which read in part:

The whole family is saddened to learn the full extent of how challenging the last few years have been for Harry and Meghan.

The issues raised, particularly that of race, are concerning. While some recollections may vary, they are taken very seriously and will be addressed by the family privately.

Please read here Lyndon LaRouche’s report on the scope of that issue of race, and consider that it is indeed time to dispense with the House of Windsor, and monarchy, and Empire, once and for all, if we are to prevent the new green genocide from threatening civilization as we know it.