Dr. Bouthaina Shaaban is the Political and Media Advisor to the Syrian Presidency. She delivered this speech on March 20, 2021 to Panel 2 of the Schiller Institute conference, “The World at a Crossroad—Two Months into the Biden Administration.” 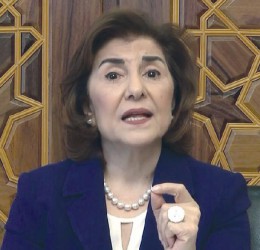 I would like first to thank Helga LaRouche, and all of you, for inviting me to speak to this very important conference, with which I find many points in common to talk about.

As our topic is “The Strategic Crisis Facing the Human Race,” I would like to start with the “Interim National Security Strategic Guidance” that was put by President Biden in March 2021, first to clarify where this new American administration is going, and what are our expectations; or how do we read this Guidance, as people who are always subject of American policies, rather than participants in formulating world policy?

The Strategic Guidance put by President Biden, for those of you who haven’t read it, starts from the concept of Western supremacy. What President Biden stresses is the American alliance and partnership with Europe, or with NATO, and what he tries to encourage is to invite countries in the world to have a world NATO, instead of just a trans-Atlantic NATO.

Now, the issue here is that the Strategic Guidance considers this bloc of countries, of NATO countries, as the ones who promote democracy, who acknowledge human rights, and who should teach the world how to have similar systems. Anyone, or any country who doesn’t fit into this criterion is considered either an autocrat or an aggressor, including Russia and China. Those are, according to this Guidance, autocratic systems, and they constitute a threat to this democracy.

So, here is the problem: That there is a number of countries who formulate an alliance and who consider themselves to hold the superior value in the world, by the way linked with interests; always, when they speak about values, they speak about also achieving American interests and promoting American values. So those countries are the ones who have, or who possess, these values and anyone who joins them becomes a part of this alliance and partnership, and anyone who doesn’t or who has a different idea of governance or a different way of life, is considered either an autocrat or an aggressor. And the other threat that comes to the mind of this group of countries is technology; is the rise of China which seems to be an obsession in this Guidance, how to stop the rise of China.

We Live in One World

The problem I see here is that we’re not looking—or, they are not looking in this Guidance, at the world as a human community. They are looking at the white supremist, and other countries who should act as these white supremacists, under the name of democracy, and human rights—whatever you call it. As a Syrian woman who lived through ten years of war in Syria, I find this logic extremely dangerous, particularly as I know, and as we experience, is that the democracy they talk about is only to make our countries satellite states to their countries, which means there’s no sense of equality or human brotherhood between their countries and our country. The logic I hear from China and Russia is the logic that says: Prosperity should prevail for all. We should fight poverty, for example, that’s what the Chinese say—poverty—and do, [fight] poverty in China, but we should fight poverty everywhere else in the world, because we live in one world: We should share its resources, and we should act together for its prosperity.

And from my point of view as a Syrian woman, who always lived in this land and who will always live on this land, no matter what, I can tell you that the reason for this war on Syria, is that Syria has an independent political mind, and an independent political decision. And this is not welcome at all by these circles, who want the whole world to be a copy of what they think, of what they want. And no one has the right to have, for example, a different democracy, or a different way of life, or a different culture that leads to things that we probably appreciate, here in Syria, where other people appreciate different things!

We Need a New Paradigm

So what I would like to say is that the world today is facing a crisis that the new American administration is focusing on alliances and partnerships in the face of China and Russia, and in the face of any country who dares be different from their democratic way of life, who dares have their own democracy, who dares have their own independent resources. Otherwise, how on Earth could the U.S. justify looting our oil and our wheat, and preventing our people from [using] our natural resources.

Here I come to the second problem in their strategy and the Guidance to the strategy, which is the difference between what is being coined in language, and the practices on the ground. The practices on the ground are that, this Western bloc, as Biden refers to it, with its partners and its alliances, do not see us as people: They see our oil, they see our wheat, they see our geographic position, but they do not care at all what kind of life we live, what kind of problems they create for us.

My conclusion from this is that we need a different paradigm for the future of humanity, and I can see that China and Russia and Iran and Syria and Venezuela, and the Schiller Institute, and all of you who believe in the dignity of the human self, and in the independence and in the sovereignty of every state in the world, big or small, are working for this brotherhood, among all countries in the world, with no superior and inferior, with no people who want to say one size fits all.

No, one size does not fit all: We come from a different culture, we have a different point of view, we like to build our future according to what we want, we enjoy, we appreciate. This is what would save the world: The acknowledgment that God created all of us in different places, with different cultures, with different languages, but only to enjoy the differences, not to give a carte blanche for those who believe they are superior to others, as they did with indigenous civilizations which were wiped out by them, and which caused a huge, horrible loss to human history and to human wealth, and to human education, and to human civilization.

I thank you for inviting me to this conference, and I truly hope that we could be active in joining partnership that would ensure a much better future for the world, where no supremacy, no occupation, no terrorism exists.