Huang Ping is the Consul General of the Consulate General of the People’s Republic of China in New York. He delivered this speech on March 20, 2021 to Panel 2 of the Schiller Institute conference, “The World at a Crossroads—Two Months into the Biden Administration.” 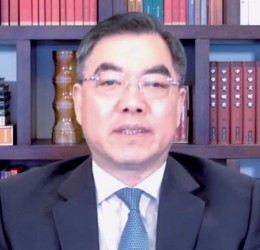 It’s my pleasure to join this video conference hosted by Schiller Institute. The past year was marked by the onslaught of the COVID-19 pandemic. Nearly 120 million people were infected, and more than 2.6 million people lost their lives. The global economy was mired in deep recession. At present, the world has achieved initial progress in fighting COVID-19, but the pandemic is still far from over, and economic recovery has a long way to go.

Just like the theme of this conference, the world is indeed at a crossroad. It’s a critical time for all countries to unite and cooperate to meet challenges together. Bearing 20 percent of the world population, being a key player in COVID vaccine R&D and production, and a strong supporter of international cooperation, China is an essential member of the human society in the most pressing task of containing the pandemic. In the meantime, contributing over 30 percent to world economic growth for the past 10 years in a row, China was the only major economy that achieved positive growth last year. Stabilizing and reviving global economy cannot do without China either. Regrettably, in recent years, China and the Communist Party of China (CPC), have been increasingly demonized, stereotyped and even labeled by some western politicians and medias. Therefore it’s essentially important for the world to understand and perceive China in a true and objective way.

Here I wish to share with you some thoughts regarding China, the Chinese government and its ruling party.

Histories make men wise. When we look back to China’s history, especially in the early 20th Century, China was then one of the poorest countries, and its people lived in misery due to domestic turmoil and foreign aggression. It was at that time, under the domestic and international movement, the CPC was born in 1921. In its 100-year history, the CPC has led Chinese people [to] accomplish world-renowned achievements in establishing and building a new China, and made great contributions to the world’s peace and prosperity.

First, we are not ruling in an authoritative way but always uphold people’s democracy. What kind of system a country chooses is determined by the country’s nature and reality. The U.S. has its American-style democracy, and China has the Chinese-style democracy. Just copying other countries may not work. China’s democratic political system was born only after the western democratic model failed to save China. It’s the result of the long-term development and evolution on the basis of China’s historical heritage, cultural traditions, and economic and social practice. The socialist democracy of China upholds the system of people’s congresses, multi-party cooperation and consultation, and law-based governance. The Party is from the people, the Government is for the people, and the country is run by the people.

That is our philosophy. According to a Harvard University survey, the Chinese people’s satisfaction with the central government is as high as 93.1 percent, which fully proves that we enjoy broad support from the people. No attempt to smear China’s social system would get anywhere.

Second, we never disregard human rights, but always put the people first. Based on China’s reality, we take the rights to subsistence and development as the basic human rights. At the same time, we strive for comprehensive and coordinated development of economic and social rights as well as civil and political rights. Over the past 70-plus years since the founding of the People’s Republic, China’s per capita GDP has risen from less than 30 U.S. dollars to over 10,000 U.S. dollars. More than 800 million people have been lifted out of poverty—I think that is the greatest achievement of human rights protection. The number of people covered by the basic medical care insurance reached 1.3 billion. Places inhabited by ethnic minorities have also achieved long-term development. In the past 60 years and more, Xinjiang’s per capita GDP grew by nearly 40 times, and its average life expectancy increased from 30 to 72. The rights of all ethnic minority groups, including way of life and freedom of religious belief, are fully guaranteed and respected. China’s human rights development achievements can stand the test of history and time.

Third, we do not stand still, but constantly seek to improve. In the past decades, we have always put forward and adjusted development strategies in a timely manner according to changes in the situation. From “Focusing on The Central Task of Economic Construction,” to “Take Development as The Top Priority,” to “Scientific Outlook on Development” and “The Overall Plan for Promoting All-round Economic, Political, Cultural, Social, and Ecological Progress,” each time the perfection and innovation of our development philosophy has led China to new development levels. Facing new changes in the current situation, we have put forward the new development concept of innovation, coordination, green, openness and sharing. It will enable China to achieve higher quality and more sustainable development in the future. For example, in the field of green development, China’s carbon intensity reduced by 48.1% compared with year 2005; non-fossil fuel took up to 15.3% in energy consumption; and air and water quality of nearly all major cities improved significantly due to concerted actions.

Fourth, we don’t advocate China First, but always embrace win-win cooperation. Win-win cooperation has been a natural outcome of China’s Reform and Opening Up. It is also the basic principle of China’s diplomacy. China’s development is not just about delivering benefits for its own people, but also about contributing to the development of the world. China has become the largest trading partner of nearly 130 countries and regions, with imports accounting for 11% of the world’s total. China is also one of the economies with the highest degree of openness and the greatest improvement in the business environment in the world. We have signed 205 cooperation documents for the joint building of the Belt and Road Initiative with 171 countries and international organizations. The total volume of goods trade with those countries has exceeded 7.8 trillion US dollars, and the direct investment has exceeded 110 billion US dollars.

Finally, we are not narrow-minded nationalists, but always care about the common destiny of mankind. We help developing countries with sincerity and good faith, and actively carry out foreign aid and mutually beneficial cooperation. We uphold multilateralism, support the UN, and work together with Russia, the U.S., and other related parties in solving various regional hotspot issues. In the face of the pandemic, we have provided assistance to more than 150 countries and 13 international organizations, donated COVID vaccines to 69 developing countries in urgent need, and exported vaccine to 43 countries. In the era of globalization, drawing lines with ideology and forming exclusive cliques targeting specific countries is unpopular and has no way out. China’s vision and actions are well witnessed and recognized by the world.

China has made great development achievements, but it remains a developing country. Some prominent problems of unbalanced and inadequate development have not been solved. There are still large disparities in development between rural and urban areas, between regions, and in income distribution, and the people are still facing difficulties in employment, education, medical care, housing, and pensions.

In the future, China will adhere to its 14th Five-Year Plan for National Economic and Social Development and the Long-Range Objectives Through the Year 2035, we will improve the quality and efficiency of economic development to better meet the needs of the people. Meanwhile, China is fostering a new development paradigm featuring “dual circulations,” with domestic circulation as the mainstay and domestic and international circulations reinforcing each other, and advancing opening-up at a higher level. This will create more opportunities for cooperation between China and other countries.

Both China and U.S. are major countries of the world. We gain from cooperation and lose from confrontation. The current China-U.S. relations are at an important juncture. On this Lunar New Year’s Eve, President Xi and President Biden had their first telephone call, which sent a positive signal to the world that the two major countries are committed to maintain communication, enhance understanding, and focus on cooperation. Acting on the spirit of the telephone conversation, China held the high-level strategic dialogue with the U.S. in Alaska. The two sides exchanged views candidly on various issues. Here I would like to share some views on China-U.S. relations in the next stage.

First, strengthen mutual understanding. The fundamental goal of China’s development is for Chinese people to live a better life. No one is in the position to deny the Chinese people their right to realize their own dreams. China adheres to the path of peaceful development, and has no intention of challenging or replacing the U.S. We hope that the U.S. can view China and its intention objectively, and maintain the correct direction of our bilateral relationship.

Second, we need to manage differences properly. It is only natural for our two countries to have differences. What is crucial is to properly manage them and not allow our relations to be defined by disagreements. Both parties should pay particular attention to respecting each other’s core interests and major concerns. The U.S. should stop interfering in issues involving China’s sovereignty and territorial integrity, such as Taiwan, Hong Kong, Xinjiang, and Tibet.

Third, we need to restart cooperation. From counter-terrorism and non-proliferation to responding to the financial crisis and combating transnational crimes, the areas where China and the U.S. need and could cooperate, are constantly expanding. At present, we have a lot of room for cooperation in areas such as pandemic control, economic recovery, and climate change. In fact, the overwhelming majority of American businesses in China have said that they see great profits and immense opportunities in China, so they intend to stay. This serves a lively example of the two peoples’ will to enhance cooperation.

Fourth, we need to resume normal exchanges. People-to-people exchanges are the foundation of bilateral relations. Exchanges will enhance mutual understanding and trust. Both sides should encourage the people of the two countries to carry out exchanges and cooperation in various fields such as education, science and technology, culture, sports and youth. We also hope the Schiller Institute and other think tanks and organizations will continue their efforts to promote the overall development.

At the crossroads of history, the future of human society ultimately depends on our choice. Conflicts and confrontation cannot lead mankind to a bright future. Peace and development remain the pursuit of most people in the world. Facing the thorny road ahead, we all shoulder heavy responsibilities. We should move in the same direction, follow the expectations of the people, and join hands to lead the human society [to] strive against the headwind and usher in a brighter world!