Richard Freeman writes on economics for Executive Intelligence Review and is co-author of the EIR Special Report, The Great Leap Backward—LaRouche Exposes the Green New Deal. He delivered this speech on March 20, 2021 to Panel 2 of the Schiller Institute conference, “The World at a Crossroads—Two Months into the Biden Administration.” 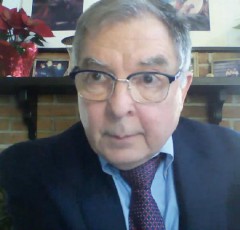 Britain’s Prince Charles, BlackRock investment advisors, and the financiers of the City of London and Wall Street, are implementing, at great speed, a green genocide program called the Great Reset, or the Green New Deal. Under the clothing of environmentalism, it would implement radical population reduction; a shutdown of agricultural-manufacturing production; and the building of a $40 trillion green speculative bubble, all implemented through a central bankers’ dictatorship.

On cue, the witless President Joe Biden issued two very important executive orders—EO13990 and EO14008—within the first week of taking office, and other programs were brought up, such as the policy paper, “Making Mission Possible,” to realize the Green New Deal.

This is being activated at a furious pace that few people actually see.

Unless we put a stop to the plans of Prince Charles and his friends, the physical economy will be torn asunder, and a genocide, perhaps several times greater than Hitler’s, will ensue.

In February of this year, EIR published the special report, The Great Leap Backward: LaRouche Exposes the Green New Deal. I urge you to get a copy of it and to study it. I can only give a few highlights.

The way to understand the Green New Deal is to understand its history, and its intent. It did not arise out of the thin blue sky. The Green New Deal was not assembled in 2017, as the media often dishonestly and profusely report. Rather it is the culmination of a 75-year project. The Green New Deal is a carefully crafted vehicle for radical population reduction, with almost no real concern about the environment. The genocidalists who assembled the Green New Deal, and its offshoots, believe that only the super-wealthy, the upper three or four percent of the population, are fit to live; they regard the other part of the population, the 96 percent, as, in the words of the Nazis, “people whose lives are not worthy to live.”

In 1946, Julian Huxley, called for the revival of the Nazi policy of eugenics, only one year after World War II had ended. In the same year of 1946, Huxley had created and appointed himself director of the United Nations Educational, Scientific, and Cultural Organization (UNESCO). In the statement stating UNESCO’s purpose, Huxley wrote:

The dead weight of genetic stupidity, mental instability, and disease-proneness, which already exist in the human species, will prove too great a burden for real progress to be achieved. Thus even though it is quite true that any radical eugenic policy will be for many years politically and psychologically impossible, it will be important for UNESCO to see that the eugenic problem is examined with the greatest possible care, and that the public mind is informed of the issues at stake so that much that is now unthinkable may at least become thinkable.

In 1946, the issue of eugenics was highly charged. Even though Huxley put it into UNESCO’s policy statement, he would be taking his life into his hands if he called for eugenics as a movement openly, so he called the movement instead environmentalism.

As for Prince Philip, in the foreword to a 1987 book [by Fleur Cowles] called, If I Were an Animal, he wrote in response to human population growth, “I must confess that I am tempted to ask for reincarnation as a deadly virus.”

Princes Philip and Bernhard, along with Huxley, created the World Wildlife Fund as an organization command center for what would become the Great Reset. They deployed Philip’s son Charles for this purpose. 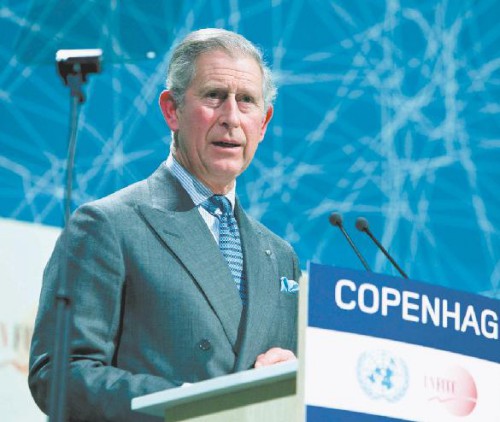 Prince Charles’ power derives not from himself, but comes from his location in an institutional arrangement amongst the monarchy; the City of London, Wall Street, and other financial centers; the Bank of England; and MI5, MI6, GCHQ—the intelligence centers. I want to emphasize that there are other forces as well.

In the early 1990s, Philip et al. deployed Charles to help set up and direct the agenda of the Earth Summit, which was held in Rio de Janeiro, Brazil in 1992. I will only report on two features. The summit was an extravaganza with more than 100 heads of state and 38,000 people in attendance. The first feature is that the Intergovernmental Panel on Climate Change previously had reported on climate change as both natural and man-made. At the Rio summit, it only reported henceforth that climate change was man-made. Second, it laid out sharp reductions in greenhouses gases; the reductions were made mandatory at the Kyoto summit five years later in 1997. The Rio Earth summit became the precedent for all future UN environmental summits held every five years. 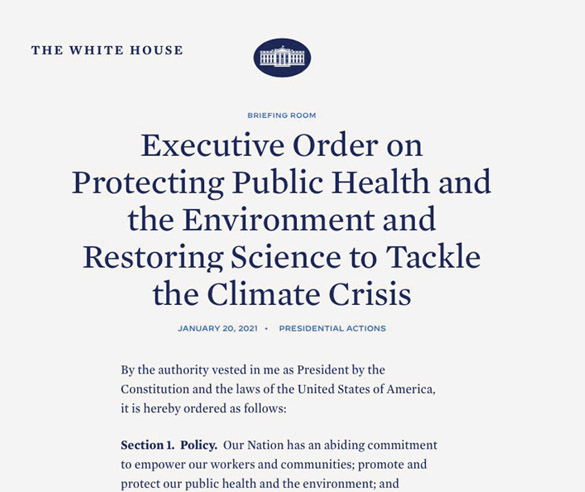 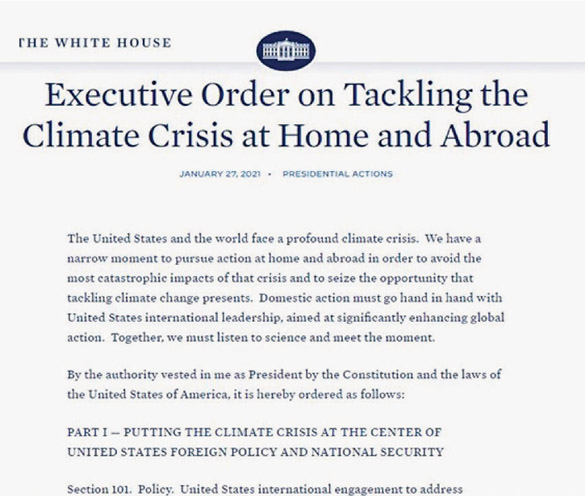 White House
If Executive Orders 13990 and 14008, now signed by President Biden, are implemented, they will cripple America’s agricultural and industrial capacity and destroy its ability to make breakthroughs to next levels of development.

The situation has intensified as the British attempt to impose the Great Reset/Green New Deal upon a willing Biden administration, making the United States the leading model for this program globally. Biden and his Special Envoy for Climate, former Secretary of State John Kerry, are working at a frenzied pace. They are adopting policies, by executive orders, that would, by design, significantly undermine America’s agricultural and industrial physical capacity and assets. This would threaten the nation’s human existence.

On January 20, a mere few hours after having been sworn in as President, Biden signed Executive Order 13990. In a simplified explanation, all federal, state, and local levels of government are required by law to evaluate each new potential infrastructure or other project on a cost-benefit analysis basis, in which the benefit is supposed to be greater than the cost. What Biden’s EO13990 does, is it would make mandatory that “social costs of carbon dioxide or other greenhouse gases” are made part of the cost-benefit analysis.

Without going into a detailed explanation here, the environmentalists falsely claim that carbon dioxide, nitrous oxide, and methane, increase the amount of global warming, which in turn, does serious damage to the economy. The environmentalists can assign a dollar amount of damage caused by each gas, which they make up, based on whatever price they choose. When that social cost of the gas is multiplied by, say, 1,000 additional tons of that gas being produced, that product can total tens of millions, or hundreds of millions of dollars of cost.

Those sums are now added onto the real costs of the project, like piping, mortar, etc., and suddenly the costs are too big relative to benefits to justify going ahead with the project. Were Biden’s EO 13990 to go into effect, it would shut down the majority of federal, state, and local projects, especially in agriculture. 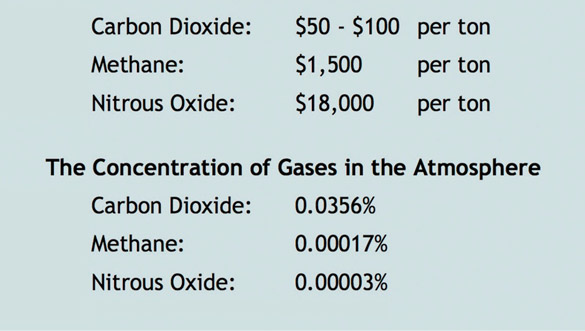 The good news is that on March 8, Missouri Attorney General Eric Schmitt and the Attorneys General from 11 other states, filed suit against Biden’s Executive Order 13990 in the Eastern District of Missouri, saying:

[It will] inflict trillions of dollars of damage to the U.S. economy for decades to come. It will destroy jobs, stifle energy production, strangle America’s energy independence, suppress agriculture, deter innovation, and impoverish working families.

As for Biden’s EO 14008, it is sweeping. It’s going to direct the Director of National Intelligence, the Secretary of Defense, the Secretary of Homeland Security, and the Chairman of the Joint Chiefs of Staff, to report on the security implications of climate change. So, it’s now shifting climate change into a central policy in every agency, including our Defense Department and the intelligence services. Executive Order 14008 also has a policy called “30×30 Conservation,” a policy which my colleague Marcia Merry Baker will elaborate on tomorrow. But we can say it will take out of use 30% of federal lands and 30% of federal waters from any form of energy development or use for productive purposes like agriculture.

Lastly, we briefly consider a policy paper called, “Making Mission Possible,” produced by the London-based Energy Transitions Commission. The report appears to set the ground to heavily reduce the production and use of aluminum, cement, and steel, because allegedly their production involves the production of too much greenhouse gases that could lead supposedly to higher levels of global warming.

Figures 2, 3 and 4 list the top uses of aluminum, cement, and steel—three sectors that are indispensable for every feature of an economy. As Lyndon LaRouche has pointed out, an economy is an integrated feature; it’s not where we build a little something here, or there. You have different processes which are necessary as a whole to raise mankind’s potential relative population-density, which means especially increasing the cognitive potential of man and making breakthroughs to next levels of development.

If you took those three elements out by themselves, you could not build infrastructure, you would not have manufacturing, you would not have agricultural implements. Kill off significant sections of agriculture, as Biden’s executive orders would do, and the economy is blowing out, and human existence plummets, setting the stage for the 75-year-old project run by Julian Huxley, Prince Charles and Hans Joachim Schellnhuber, for the radical reduction of the population. But it is the same condition in most nations of the world with the exception of China, and positive sections of Asia.

The lawsuit filed by the Attorneys General of 12 states indicates we have tremendous openings, if we seize them. We can bring the Green New Deal completely down, and move into the world of the Belt and Road Initiative.