Agriculture: Stand Together forFood, Health, and the Future

Robert Baker of the Schiller Institute agriculture committee, made this presentation to the Schiller Institute’s international conference, “The World at a Crossroad: Two Months into the New Administration,” during the fourth panel on March 21, “The Challenge of Famine and Pandemics: The Coincidence of Opposites, or Mass Extinction?” 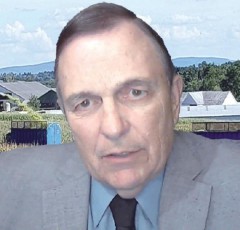 Think about this irony, farmers are going into the streets with their tractors, in India and Germany to protest, to be able to continue to produce food. At the same time, millions of people are dying for want of food. Last year, over seven million people starved to death. Look at Yemen, Haiti, and places in Africa.

I want to report on another side of this:

In the U.S., farmers are being approached from all sides on how they have to agree to new, unheard-of terms, to even hope to stay in farming. Here are some examples:

Say you want to get a loan for this crop year. There’s an outfit that offers loans at lower interest rates, if you agree to produce less food. This is a pilot project, set to go big. It’s called RePlant Capital.

Say you are running cattle, and one day, the big mega packer you sell to says, “Now you have to agree to our new plan with the World Wildlife Foundation, which tells you, you’ll now do what we say, to save the prairies and scale back your meat.”

Then a guy shows up one day and makes the pitch that you are the chosen farmer in your county, to show the way by signing up for the certification program to sell “credits” for the carbon you are sequestering in your soil, for the “carbon market.” Or else: Lucky you. You say to yourself, “This is nuts!”

A friend who couldn’t be here today, Tyler Dupy, the CEO of the Kansas Cattlemen’s Association, wrote a great satire about all this carbon markets hustle. Tyler wrote, “What is a carbon offset credit?” He says, “In reality, it has the equivalent value of magic beans or a pound of fairy dust.”

Say you point out to people that there are famines now. The answer you get back is: “There’s nothing you can do. It’s like war and taxes.” And if you accept that, you fall under the narrative, hypnotic spell of the “Great Reset” cartel lords of London and Wall Street. It’s evil. It’s mind control. Because it’s all a cover for swindles, and for depopulation.

That’s what we are here to break up. We expose what is behind this evil. We’re taking action to break the spell. We are creative human beings, not flunkies doomed to mindlessly accept the narrative.

Today, we have short reports from different farm states of the United States. My own farm connections are from Iowa.

We will hear from farm leaders from Kansas, Colorado, Montana, and Indiana. Speaking for us all, we stand together, with the doctors, nurses and people of all walks of life here and from all countries. We stand together to defeat these killer cartels, and save people’s lives.

To begin the reports, we will hear from a farm leader from Montana, Bill Bullard. He is the CEO of R-CALF USA, the largest organization in the United States of producer-only cattle and sheep producers. He provided this message from a presentation he gave earlier this year to a Yale University Law School conference on agricultural anti-trust.