Marcia Merry Baker is Co-Director for Economics Intelligence and an Editor for EIR. We publish here an edited version of the prepared remarks of her speech delivered March 21, 2021 to Panel 4, “The Challenge of Famine and Pandemics—The Coincidence of Opposites, or Mass Extinction,” of the Schiller Institute conference, “The World at a Crossroad—Two Months into the Biden Administration.” 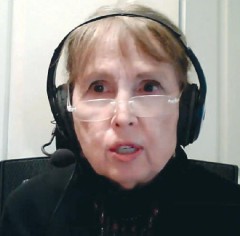 The former Chief Medical Officer of the District of Columbia Department of Health, Dr. Walter Faggett, spoke out at a recent meeting of medics, farmers, and others, to declare, “Food is medicine!” He got a round of amens. What he was referring to, was not what you see on late night TV—power drinks and magic beets; he was referring to the all-around health condition of a person that depends on medical care and vaccines, and a decent daily diet.

We’re in an emergency. On the medical side, we lack the full-scale rollout of vaccines, and infrastructure for healthcare security—hospitals, standby R&D against future epidemics, doctors, nurses, public health workers, water, power, and sanitation.

On the food side, we have man-made famines. This hunger map (see Figure 1) shows—in the darkest red tones, the nations with the most extreme lack of food. You see large parts of Africa, Yemen, Haiti, and other places. Over 30 nations are in this situation. The number is growing of those in extreme need, now at 270 million. In Yemen alone, 20 million people are in dire need of food. But, before the pandemic even hit, there were over 800 million people who were “food insecure”—that is they did not have enough to eat. That is about one in every eight persons on the planet. 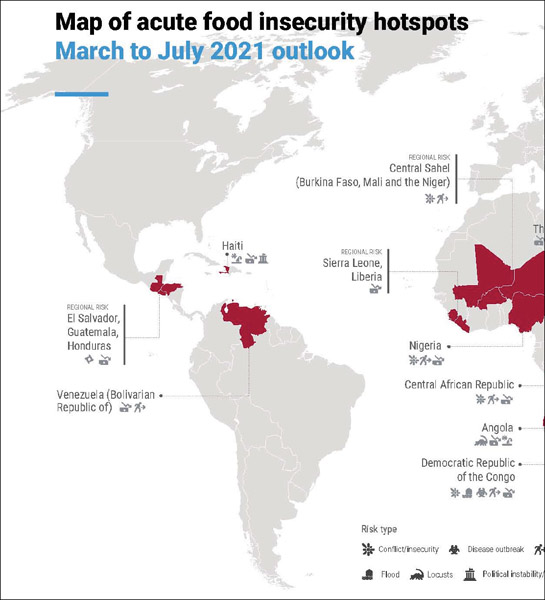 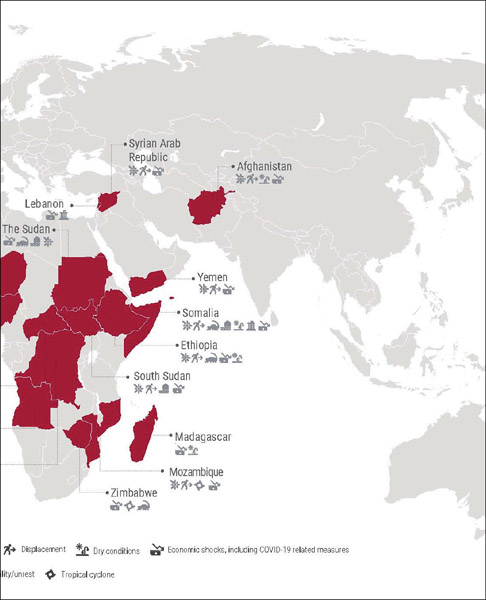 A map of 20 hot spots where action is urgently needed to avert famine risk. More than 34 million people are at the point of starvation in the 20 countries shown, centered in Africa. At the top of the list are Yemen, South Sudan and northern Nigeria.
On March 23, the map was released in the report, Hunger Hotspots—FAO-WFP Early Warnings on Acute Food Insecurity, March to July 2021 Outlook, by the UN World Food Program (WFP) and UN Food and Agriculture Organization (FAO), whose directors called for emergency action. The 20-page document gives specifics for each area of the various crises, citing weather disasters, conflict, locusts, plant and animal diseases, and the impact of the pandemic, all atop the underlying harm from lack of development.
A year ago, WFP Executive Director David Beasley warned of a potential “crisis of Biblical proportions.”. On March 23 of this year, he said, “We urgently need three things to stop millions from dying of starvation: the fighting has to stop, we must be allowed access to vulnerable communities to provide life-saving help, and above all we need donors to step up with the $5.5 billion we are asking for this year.”

There are very evil networks and practices responsible for enforcing this hunger and sickness. But first, consider what they do to stop us from acting on the emergency.

First, a black out.

Second, they push diversions. For example: the “Don’t Waste Food” campaign. Of course, you shouldn’t waste food. But you are wasting your passions.

Three, the big lie is that there is plenty of food in the world; it is just not distributed fairly and is also going to waste. For example: Last June, UN Secretary-General António Guterres said, “While there is more than enough food in the world to feed everyone, more than 820 million people still do not get enough to eat….” He will be holding a World Food Systems Summit at the U.N. in September based on this fraud.

We need to double food production. Take grain as a measuring rod. For each person, there should be produced about a half ton of grain per year, for direct eating and for consumption through the animal protein chain—for milk, or eggs or meat. Plus, you need reserves and carryover. Multiply that times 7.9 billion people, and you get that the world should be producing four or five billion tons of grain per year.

But we produce less than half that—2.3 billion tons. Sure, you can hear quibbles—what about people who live on potatoes and cassava, and what about getting rid of grain-eating animals, etc. But forget the “what-ifs.” On a per person basis, world harvests are dropping, and starvation is increasing. World grain production and stocks are going down. It’s headed to get worse.

So, what should we do? Short term: Make the best of wherever food is available now and get it to people on an emergency basis. Longer term: Crank up production.

Take one grain as an example—corn or maize. It is the world’s number one grain in volume of output. The U.S. corn belt, accounts for over one-third of all corn in the world. Mexico—where corn originated—South America, Brazil, Argentina, and Central Europe has a lot. And China a great deal. South Africa produces a significant amount.

So, on first reaction, someone could say: crank out more corn where it already is grown—a good impulse. Make sure the farmers have support—a good price, inputs, and do it. But look at the other parts of the world where little is grown because agriculture has been deliberately suppressed—yields are low, and crop disasters are frequent. This must be reversed.

Southeastern Africa is one of the world’s potentially richest corn belts. The yields here, apart from South Africa, are however, less than 2 tons per hectare as compared with the U.S., which has yields of 6 tons per hectare. Why? Everything is lacking—good seeds, fertilizer, timely water, mechanization. Change this—for example, seeds.

New drought-tolerant seed varieties of corn have been developed in just the last 12 years, and there are partner programs to get the seeds of these new varieties to different regions in southern Africa. Their use will increase the yield by half, right away!

There are already programs to get good seeds in targeted corn belt nations in Africa from the Mexico-based International Maize and Wheat improvement center and University of California Davis. China is doing wonders with rice seeds too.

Mozambique is suffering drought, even after a January hurricane. Eighty percent of the population is in agriculture. Thirty percent of the daily diet is corn. The new seeds can increase yields there by half.

Seeds are just one part of changing the whole world farm and food picture. But understand, acting on this is a direct attack on the imperialist pattern, in which the transnational food trading and processing cartels control the whole world map of production and trade. (Fortunately, China and now Russia, are exceptions.) These companies use the U.S. corn belt and other sectors as export source areas to dictate who gets to eat, and who doesn’t. They play everyone off against each other. They tell U.S. corn growers: if Africa produces, you will lose market share. They tell African livestock producers: U.S. cattlemen hate you.

Farmers will be the first to tell you that we are at the end of the line for independent farmers and ranchers.

In India, thousands of farmers have been protesting since last November against radical new agriculture laws that will give food cartels vast control and ruin farmers, while in Germany farmers took their tractors to the streets in February against what’s happening.

On top of this comes the synthetic, or fake food movement, owned and pushed by the same cartels. The product itself may be good for space travel, and emergencies, but it is part of the food-control and depopulation drive.

What we need for food and agriculture, going along with medical and public health, requires both emergency measures—like vaccines and food aid—and long-term measures for health and agriculture. In turn, this means exerting sovereignty.

What must be done:

Deliver the emergency food. The World Food Program has the dollar value of what’s needed. It’s in the range of $12 billion this year alone; five-plus billion more than is being given. We need military style logistics teams from the U.S and other nations.

Defend the productivity of farmers everywhere. That means fair and steady pricing, and support for independent, family-scale farmers. Roll out special support measures for young farmers.

Deliver emergency farming inputs everywhere you can, to maximize what can be produced in the coming harvest cycles and lay the groundwork for long term.

Stop the destruction of food, farmers and agriculture that is underway. Last May the European Union announced a terrible Green Deal called Farm to Fork Strategy, which mandates that by 2030 land in use for agriculture must be reduced by 10%; fertilizer use must be cut by 20%; the use of veterinary medications cut by 50%; and the use of anti-pest chemicals cut by 50%. This will result in less food for 185 million people.

Now Britain and the U.S. are doing it. Britain put in what it calls its Agriculture Law last year. In the U.S. on January 27, President Joe Biden signed Executive Order 14008 that establishes a task force in the Interior Department to enforce, under the so-called “30x30” plan, the locking up 30% of U.S. land and water out of agriculture and other uses by 2030.

Committee for the Coincidence of Opposites

Last summer, Helga Zepp LaRouche initiated what she called the Committee for the Coincidence of Opposites to defeat this disaster. It is named for the concept put forward in the 1400s by the thinker Nicholas of Cusa, referring to the principle of understanding the common interest of all involved, over and above any apparent conflict. This is clear right now in terms of the mutual benefit to defeat the SARS- CoV-2 virus and any more to come, end famine, and build a world of health and food security, and progress.

The Committee has pilot projects now being finalized, which will provide concrete aid and assistance on a small, initiating scale, and catalyze ever-widening action on a large scale. One involves a combined shipment of aid to southern Africa, with medical supplies, food, and seeds. Other actions are in the United States, enlisting young trainees in community public health service.

A special friend of this outlook is a man who passed away from COVID-19 just a month ago, Dr. Sanjaya Rajaram, who was an outstanding crop scientist, having developed 480 strains of wheat. He embodied applied optimism. From India, he became a Mexican citizen, starting work at age 29 with Norman Borlaug at the International Maize and Wheat Improvement Center.

In 2014, he spoke to Carolina Domínguez, (who spoke on Panel 1 on this conference,) and Fabiola Ramírez, who had interviewed him for the LaRouche Citizens Movement of Mexico. He urged youth to not only work hard, but to have as broad a view as possible, and thanked the many people who worked with him in the wheat breeding projects. He said:

After the Green Revolution, during the period in which I lead research into wheat and its development, the world was able to produce 200 million more tons of wheat. That is a great advance in the availability of world food. Many countries, more than 50 of them, benefitted form this development, including Mexico.

We can do this! Food and medicine. We can do it!