Independent Cattlemen Fight for Us All

Bill Bullard is CEO of R-CALF USA (Ranchers-Cattlemen Action Legal Fund United Stockgrowers of America). He provided this video message to the Schiller Institute’s international conference, “The World at a Crossroad: Two Months into the New Administration,” during the fourth panel on March 21, “The Challenge of Famine and Pandemics: The Coincidence of Opposites, or Mass Extinction?” from a presentation he gave earlier this year to a Yale University Law School conference on agricultural anti-trust. 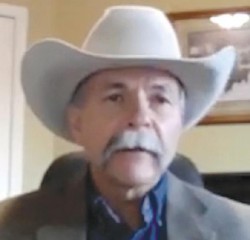 They’re also very diverse. They vary in size, and in their production practices, from low-input practices such as all-grass supply chains, to higher-input practices such as conventional grain-fed supply chains. In addition, the U.S. cattle industry under-produces for the domestic market; meaning that unlike many other agricultural commodities, the cattle industry is not dependent on what can be a fickle export market for its economic well-being. It certainly has room to grow and expand all across the United States, both in terms of attracting new entrants and in keeping current producers whole.

A Crushed Potential to RevitalizeRural America

These factors suggest that the U.S. cattle industry has tremendous potential to revitalize rural America and its ailing communities. But it can’t play that role under current conditions. In fact, the cattle industry is now a leading contributor to the continual decline of rural America’s economy. The cattle industry is suffering from long-term lack of profitability and unprecedented price volatility, causing cattle farmers and ranchers to exit the industry at alarming rates, which they’ve been doing for decades.

But if you’re a consumer, you’d likely say that that can’t be true. After all, you’ve been paying record and near-record high prices for beef for years, even before your grocery stores began running out of the beef following the onset of the COVID-19 pandemic. If you’re a consumer looking at cattle farmers and ranchers from the vantage point of the beef market at your grocery store, you’d have to conclude that I’m not telling you the truth. And your assertion is well-grounded, because you understand that in a competitive marketplace, competitive market forces are responsible for and capable of properly allocating the profits of a given product—in this case, beef—to each segment of the product supply chain. Thus, higher beef prices simply must translate to higher cattle prices.

That’s not happening in the U.S. cattle market, which is presently controlled by an oligopoly. There are just four packers controlling 85% of the marketing outlets for the 26 million head of harvest-ready cattle produced each year, by the hundreds of thousands of U.S. cattle farmers and ranchers. 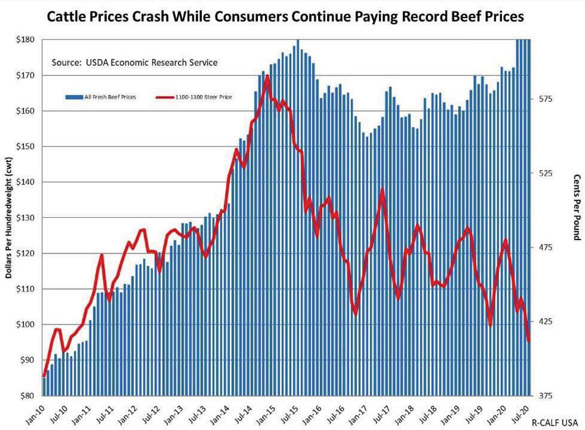 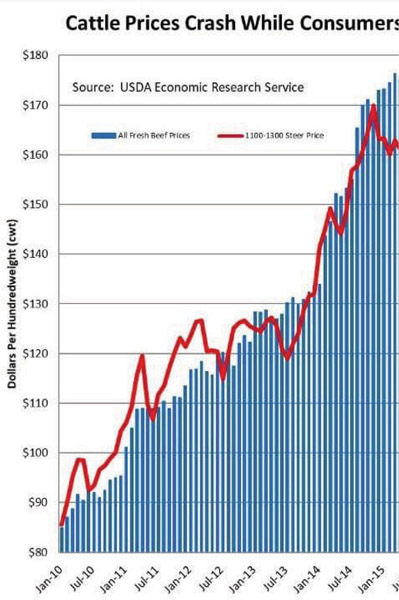 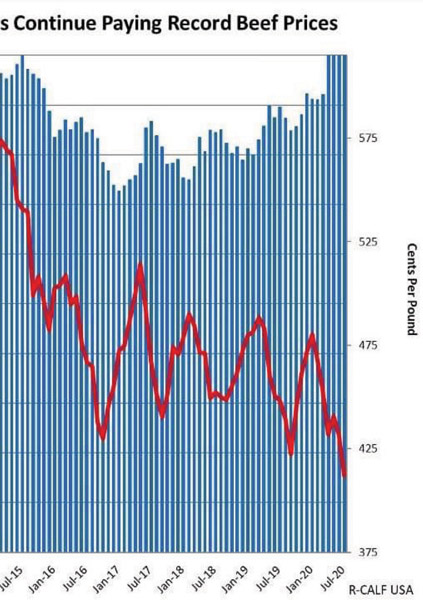 What’s Happening in the Cattle and Beef Markets

So, here’s what’s been happening to the cattle market and to your beef market. Figure 1 shows you a graph that is populated with ten years of monthly data. And this begins in January 2010 and goes all the way to November 2020. You can see at the beginning of this graph that there’s a synchronous relationship because the red line represents the cattle prices that cattle farmers and ranchers receive, and the blue graph represents retail beef prices. You can see at the beginning part of this graph that as cattle prices and beef prices were increasing, they did so in relative synchrony.

Then, at the end of 2014, there was an inexplicable collapse in cattle prices, lasting for 19 months. But you see that beef prices that consumers were paying, continued to rise. So, what we had was, consumer prices began to subside somewhat; cattle prices fell significantly.