Dr. Joycelyn Elders served as Surgeon General of the United States (1993-1994). She delivered this speech on March 21, 2021 to Panel 4, “The Challenge of Famine and Pandemics — The Coincidence of Opposites or Mass Extinction” of the Schiller Institute conference, “The World at a Crossroad—Two Months into the Biden Administration.” 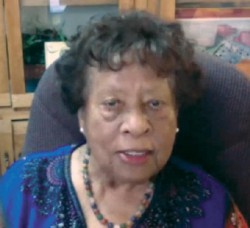 I would like to remind you all of something I said at one of the previous conferences. As a former Surgeon General of the United States, I headed up a branch of the Uniformed Services that is called the United States Public Health Service Commission Pool. This branch often has Surgeon Generals pictured in military uniforms. Now, this branch of the military does not carry arms in one sense. It is a vanguard of what should one day constitute 80% to 90% of America’s world military presence: engineers, doctors, nurses, teachers, water management specialists. In a larger sense, we’re empowered to wage wars—wars against disease, wars for universal public health education, wars for decent healthcare for all. This is not a local or even national war, but a world war for all humanity.

This pandemic has certainly taught us a lesson, and it will be lethal, and we’ll be lethally punished if we somehow ignore it, acting as if we had problems of blindness. But I feel that COVID-19 has opened our eyes such that we should now see clearly and have 20/20 vision for all the problems that are going on and have been ignored in the world.

Committee for the Coincidence of Opposites

I was especially excited when Helga [Zepp-LaRouche] proposed that as a key part of the Committee for the Coincidence of Opposites, that we create a youth component on the model of President Franklin Roosevelt’s CCC, the Civilian Conservation Corps, back in the 1930s. For a long time, I have championed and promoted the idea of community healthcare workers, especially involving young people who would be deployed into communities and towns throughout the country, and even eventually internationally.

I’m pleased that we now have a good model for such a community outreach program in Washington, DC, which you will hear more about later in this panel. A type of extension service of the Public Health Commission Corps, like the famous Agricultural Extension Service, which brings well-being rather than destruction to the population. This civilian force could augment and assist trained medical personnel in combatting disease, and especially this pandemic that hopefully has opened our eyes and improved our vision. These community workers can also build the needed trust and confidence to address this crisis. This needs to be done immediately throughout the United States, and it has not yet been done.

Since the last time I spoke, we’ve turned a corner in the battle against this pandemic, with the development, production, and administration of multiple vaccines. But there is still much that needs to be accomplished. We have not established a reliable public health system.

COVID-19 is raging in Europe with problematic distribution and administering of the vaccine. We have war and disease in many parts of the world. David Beasley of the UN World Food Program has warned that about 16 million people in Yemen—about half the population—are on the cusp of malnutrition and starvation due to the ongoing war. 270 million people worldwide are threatened with malnutrition and starvation in this year alone. I’m especially alarmed to hear about the various serious situation in Brazil, where there have been 280,000 deaths from COVID-19. This pandemic, combined with impoverished conditions, could lead to severe and more mutations. We must do away with punitive and counterproductive sanctions against nations. Food and medical care are basic human rights and should not be held hostage to politics.

It is of great importance and urgency that nations, especially those large powers like the U.S., China, Russia, India, and others, work together with the smaller, but economically powerful nations in other parts of the world to solve these problems.

We will also hear later in this panel about a pilot project which the Committee is beginning in Mozambique to provide food and medical supplies. While these projects are modest in scale, they are bearing fruit, and hopefully can serve as a catalyst and demonstration of what can be done on a much larger scale, if we have the will and commitment to get it done, and to work together.

In conclusion, as the title of this conference says, the world is at a crossroads. You bright young people are at a crossroads. You must do the things we must do to unite, work together, solve our injustices. We must choose the path, and we have to decide what path we will choose. Will we choose despair and self-destruction, or hope and healing? Let us work together and hopefully choose the latter. We need to work together to make this world a better place for all of us, and deal with the moral reckoning that we must come to grips with in this world. We must survive. Thank you.